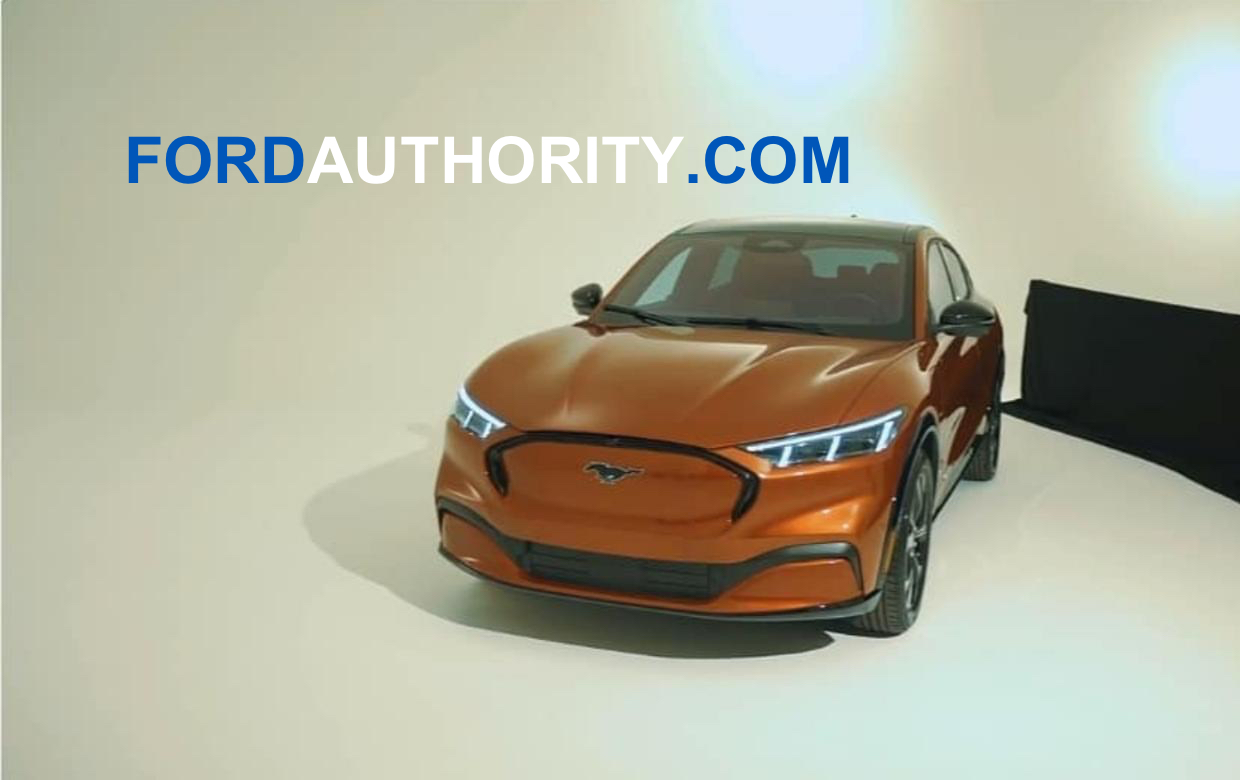 The new leaked images obtained by Ford Authority originate from screenshots of a video shoot of the new electric Mustang crossover-hatch. The photos show the model from various angles that we haven’t seen before, giving us a look at the car in a real-world environment, rather than renderings or doctored images for the web.

The model in question appears to be an AWD model called the Mach-E4 X, though it’s unclear whether it’s the Launch Edition or not.

At the front, the new Ford Mustang Mach-E features all-LED headlamps, with three vertical bars capped off at the top by a horizontal bar. The configuration is reminiscent of the trademark Mustang vertical tail lamps, which this vehicle also has. The face features a closed-off front end without any noticeable openings for air flow, along with some intricate surface detailing on the front bumper cover just beneath the headlamps. The legendary running pony logo adorns the front end. The Ford Mustang Mach-E features a sloping, coupe-like roofline. Speaking of the roof, it’s black front to back, giving Ford’s new EV a unique and sporty aesthetic. The roofline flows into a set of noticeable “hips” as well as a hatch with a relatively short decklid, which juts vertically into the rear fascia. The Mustang tri-bar taillamps sit prominently out back, but they have a vertical component running toward the middle of the vehicle, which – like the front – features the running Ford emblem. The leaked images also shed some light on one of the mysteries of the Mustang Mach-E – the door handle. As it turns out, the handle for the driver’s door is attached to the distal end of the horizontal window trim molding. The door also features the Ford SecuriCode keypad entry system.

We also get a look at the front trunk, which Ford Authority has learned features 4.8 cubic feet of storage. The water-resistant space is washable and features a drain, making it quite handy for tailgating, camping, and toting muddy gear.

Only one of the images is of the interior, and it shows the gargantuan, vertically-oriented infotainment screen (which Ford Authority exclusively reported on). The display looks eerily reminiscent to an iPad Pro, or the screen configuration used in various Tesla models. A circular knob is positioned at the bottom of the screen to control volume.

These new Ford Mustang Mach-E images arrive just a day ahead of the model’s official unveiling, and shortly after Ford announced its official name, which Ford Authority was first to report on over a week ago.

We’ll have the complete details on Ford’s new Mustang Mach-E on Sunday, November 17th – which is when the Mustang Mach-E will make its “official” debut. Following the event, the reservation books for the Mach-E will open, as Ford Authority originally reported.