Of all the performance machines that Ford has made over the years, the one that truck fans remember most is the Lightning. Be it the supercharged second-gen truck or the boxy first-gen Lightning fans want Ford to bring the Lightning back. While Ford may not give us another Lightning, Shelby American has unveiled a new truck at SEMA 2019 that is a reincarnation of the Lightning called the Shelby Super Snake Sport F-150 concept.

The concept truck rolls on Shelby specific lowered suspension and has a supercharged 5.0-liter V8 engine under the hood. The Shelby blower strapped to the V8 engine makes 755 horsepower and gives the truck a “throbbing” exhaust note, according to Shelby. The outside of the truck was revised to provide it with style to go with the performance the truck offers. Shelby says that the four-door trucks it builds are very popular with buyers, but some had been requesting a more powerful, 2-door version of the truck. Shelby says that the Shelby Super Snake Sport F-150 is an “unrivaled king of the road” F-150 and a “nightmare” for any other performance truck in production. Shelby is throwing a bit of shade at the Roush Nightmare trucks that currently hold records for acceleration for pickups. Since the truck is a concept, no pricing or availability details are offered. Check out the Shelby GT500 Dragon Snake unveiled today.

Specifications are as follows: 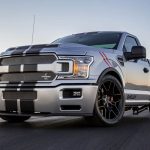