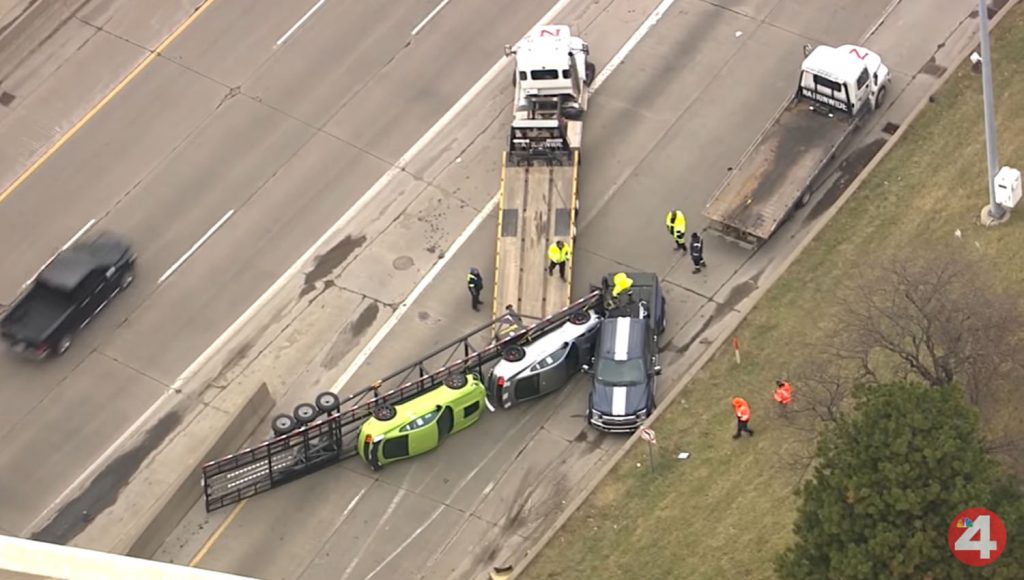 Not long ago, we talked about the 2020 GT500 cars that were damaged in an accident during delivery. One of the vehicles was a Grabber Lime, and the other was silver. The accident happened as the two cars were being delivered using a fifth-wheel car hauler trailer and a Super Duty pickup truck. At the time, we wondered if the vehicles were owned by a dealership or still owned by Ford and in transit.

Some new information on the accident has surfaced, and one report has claimed that the Grabber Lime car was a custom build for a great-grandson of Henry Ford. A Ford spokesman has now denied that report. Ford has stated that it is aware of an accident that involved a shipment of new 2020 GT500 Mustangs. Ford stated that it wasn’t aware of any injuries with the accident and that it had nothing further to share at this time.

Ford’s Mike Levine added that neither of the custom GT500 cars was going to a Ford family member. There had been other speculation that the green GT500 might belong to a YouTuber who goes by StangMode because he had a video up for a short while that appeared to show an identical car being built. StangMode has said that the damaged green GT500 wasn’t his car.

The cars had just been built, according to reports, and were being transported to the Flat Rock assembly plant by Penske Vehicle Services via a fifth-wheel trailer when the accident happened. Both of the cars hit the pavement on the passenger side. As for the cause of the accident, authorities have stated that they believe excessive speed and an improperly balanced load caused the crash.

Reports indicate that both cars are in a storage facility waiting for inspection, and they are still apparently owned by Ford. If Ford releases the vehicles, they could both be sold at a salvage auction according to reports. The cars being sold would be exciting for anyone wanting to possibly get hands on a cheap 2020 Shelby GT500 engine for a beast of a swap.