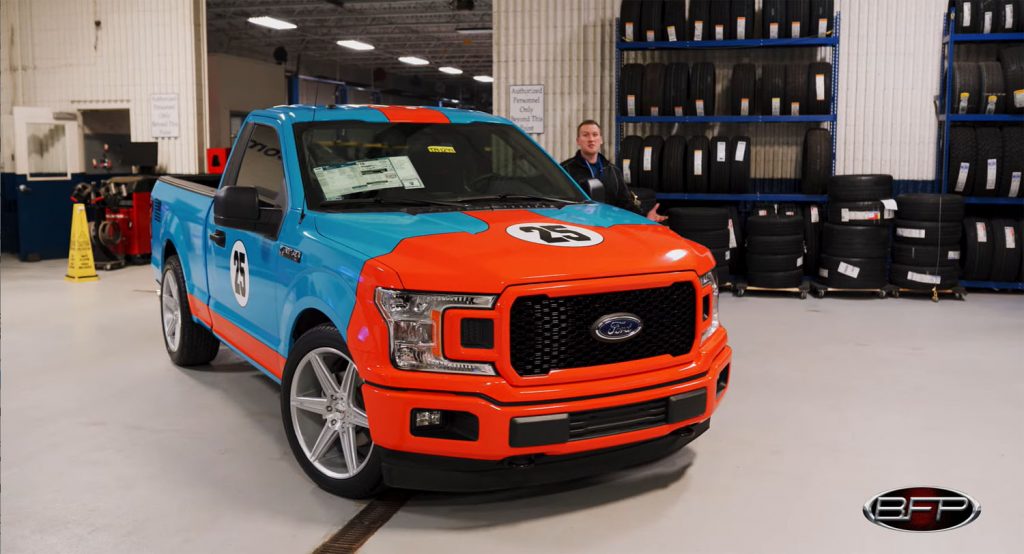 The gang over at Beechmont Ford Performance have been churning out some cool trucks and Mustangs that have more style and performance than stock. One of the trucks that the company has made is the Retro F-150 that has two-tone paint and looks like the Ford trucks from decades ago. The latest video from the Ford dealer starts with a slick-looking Ruby Red Mustang GT that has a Whipple supercharger. The car looks nice, but it’s plain. At about 2:16 in the video, the Gulf livery Ford F-150 rolls out. It’s odd to see a livery customarily associated with racing cars on a truck, but it looks undeniably good. The base truck is an F-150 XL 2-door. Other than the Gulf livery, there is a number plate with 25 inside it to symbolize the 25th year of the auto group that owns the dealer.

The truck has a lowering kit and rolls on KMC 22-inch wheels, and the truck has a Roush cat-back exhaust system. The exhaust certainly gives the truck a muscular sound that doesn’t sound like an old farm truck with glass packs. The truck has no performance mods and no mods on the interior.

If ever a truck begged to have a supercharger strapped on, the Gulf livery Ford F-150 was it. Bolt a Whipple on the truck, and it would be an excellent modern rendition of a Lightning. We aren’t sure if the livery is a vinyl wrap or if it’s custom paint. Either way, we like the style and think it’s a cool project. It’s unclear if the truck is a showroom piece for the dealer or if it is for sale.