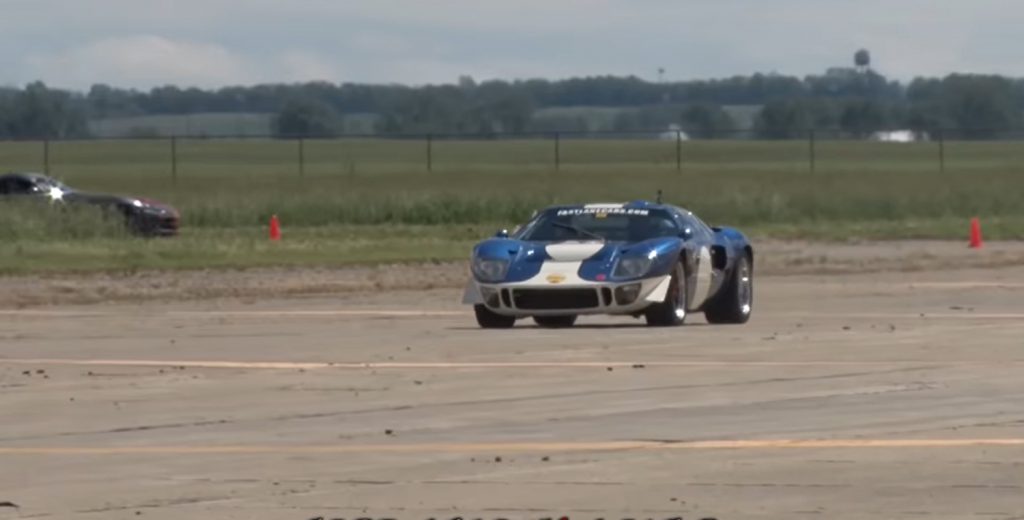 It goes without saying that the new Dodge Charger Hellcat is a fast car in the quarter-mile. While drag racing is traditionally done on a quarter-mile track, 1/8 mile racing is common when there isn’t enough room for a full 1320. Some places are lucky enough to have more space, and half-mile or mile-long racing isn’t unheard of.

This race is between a Superformance GT40 that was built sometime in the ’90s and a modern Dodge Challenger Hellcat in a half-mile drag race. The GT40 is solid ’60s tech, and this one has a beefy motor sitting behind the driver. The engine is a 427 cubic-inch Dart Block V8 that the owner claims makes 450 horsepower at the wheels. Dodge rates the Hellcat at 707 horsepower at the crank. The owner says the GT40 is a “good road racing car” and notes that he has never had it up to the top speed.

The owner says that he has had the car up to around 150 mph on the road course before. In the ’60s, some of the real GT40 cars were doing over 200 mph at Le Mans. It does sound like the driver is bouncing the GT40 off the rev limiter a lot in some of the races.

The Superformance GT40 averages a top speed in the 153 to 155 mph range during the runs that are on video. The car did go a little faster from the dig than it did from a roll. The Superformance GT40 might not be the fastest car out there, but it is one of the sexiest on the track. We’d love to see that car run a longer track and close in on the top speed. We’d also like to see what the car did if the driver didn’t hit the rev limiter. Superformance made the cars for the epic “Ford v Ferrari” movie.