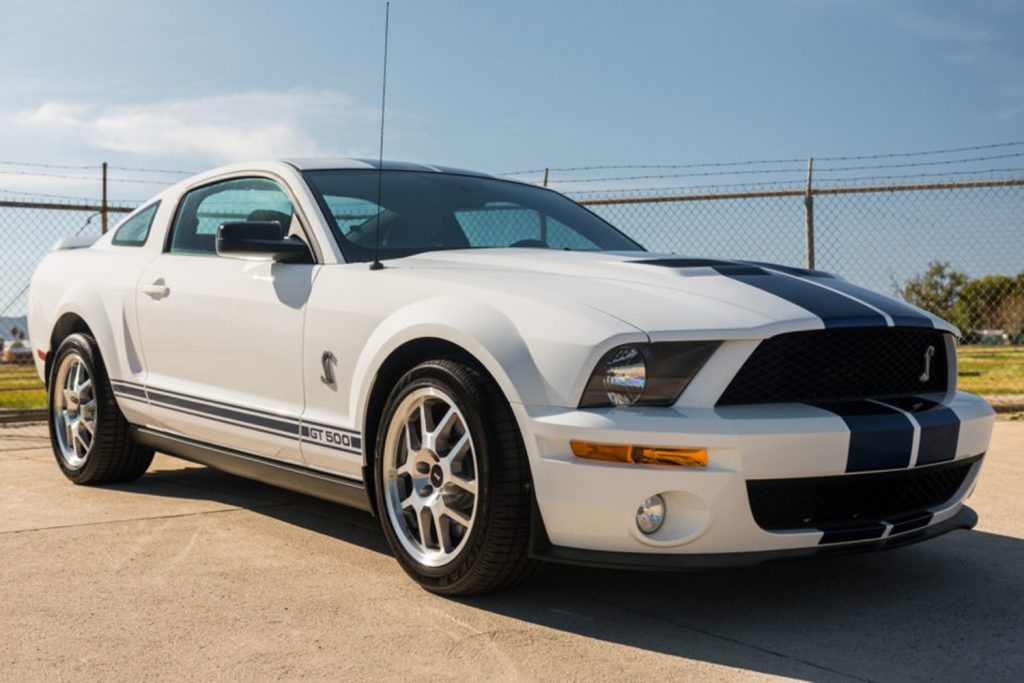 The car in the images here is an S197 Ford Mustang, more specifically a 2007 Ford Mustang Shelby GT500. This is one of the lowest mile 2007 GT500s that we have seen with only 929 miles on the odometer. Power comes from a 5.4-liter supercharged V8 mated with a 6-speed manual transmission. The 2007 Ford Mustang Shelby GT500 is Performance White with blue racing stripes. It has Brembo brakes up front, SVT suspension, and a stainless dual exhaust system. The car was recently serviced with a fresh oil change and a new battery. The seller is a dealer, and the car comes with two sets of keys, the factory literature, SVT certificate, and a clean California title and Carfax report. The interior is covered in black leather. The car appears to be in perfect condition, as you would expect a car with only a bit more than 900 miles on it to be. The GT500 was one of 2,252 made with Performance White that year. It has the factory 18-inch wheels and the original Goodyear Eagle F1 tires. We’d wager anyone who wants to drive the car will want to replace those tires as they have been sitting for over a decade. The supercharged engine is rated for 500 horsepower and 480 pound-feet of torque. We see no blemishes on the car in any of the pictures. The 2007 GT500 is on Bring A Trailer and is up for auction. The auction has a bit more than two days left as of writing and is set to end on January 6. The car has been bid up to $23,000 as of writing. Who knows how much the car will end up going for, but they weren’t cheap in their day, and we don’t think these cars are appreciating yet. It would be a surprise to see it reach its 2007 sticker price. The 2007 GT500 from “I Am Legend” was for sale not long ago.