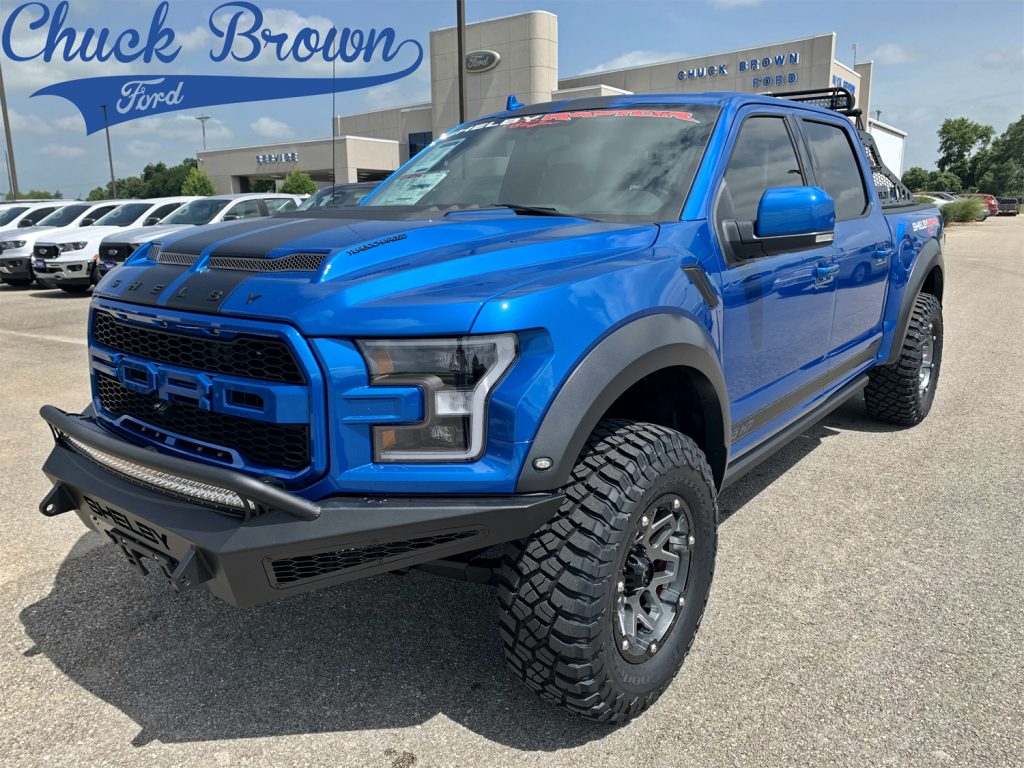 The gang over at Chuck Brown Ford in Schulenburg, Texas, has one of the coolest trucks you could purchase. The truck is a 2019 Ford F-150 Shelby Baja Raptor. These trucks start as already cool and fast F-150 Raptors and then are sent to Shelby to have more work done to make them perform better. The truck in the images here is Velocity Blue and has a black interior. We particularly like that the stripes on the truck are black rather than white. The black steps give it a meaner, and more aggressive look. What makes these trucks Shelby versions are different front and rear bumpers, a chase rack in the bed, and six high-performance wheels and 35-inch tires. The truck rolls on four, and there are two spares in the bed of the truck. Shelby massages the engine of the Raptor a bit with an EcoBoost performance upgrade that draws over 525 horsepower and 610 pound-feet of torque out of the high-output EcoBoost V6. The interior gets carbon fiber accents and a serialized plaque on the dash. The front bumper is steel and has tow points, airflow vents, and an attached 40-inch curved light bar. The bumper also has a pair of 10-inch LED driving lights. The rear bumper is steel and has a pair of 10-inch round LED driving lights and a pair of square LED lights. The suspension is Shelby by Fox 3-inch Raptor Stage 2 shock system. Shelby also fits the truck with power steps with rock sliders and lights. The chase rack has a 50-inch power actuated up/down LED light bar and looks cool to boot. All that cool certainly costs a lot, with the truck carrying a price of $119,000. Watch this Ford Raptor tow charge a Tesla.