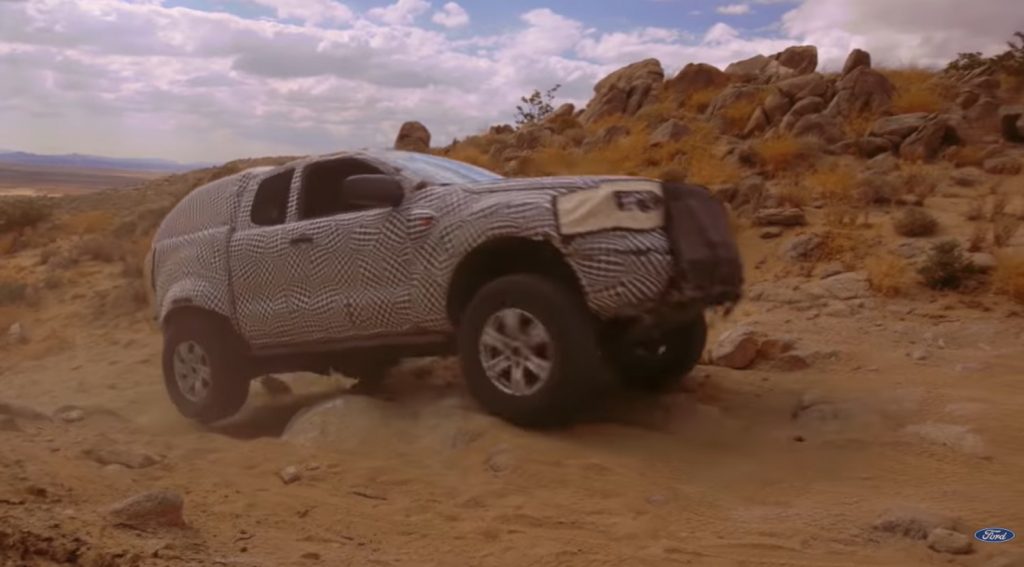 Ford has had Bronco test vehicles out all around the country as it gets ready to unveil the vehicle this spring. Our first glimpse at what the Bronco would look like came with the Bronco R race prototype that is said to hint at the styling of the production vehicle. We’ve seen Ford Bronco test mule vehicles in various disguises, including what appears to be a cut-down Ford Ranger pickup body in the past.

The video that Ford shared of a Bronco test mule running the desert shows a strange cut-down pickup body that looks almost identical to the test mule we talked about in the past. The video shows the Bronco in the desert running at high speeds and driving over rough terrain.

The Bronco prototype certainly looks poised at speed going over the undulating bumps out in the desert. We’ll admit that we hoped the Bronco would be tuned more for handling and articulation for lower speed work on tighter and more technical trails. It appears that much like Ford did with the F-150 Raptor, the big focus for the Bronco will be high-speed desert running. High-speed desert running is something most people interested in the Bronco are unlikely to do frequently.

The video Ford shared was shot in the high desert of California in an area known as Johnson Valley. Ford also reminds us that the Bronco will be based on the T6 architecture, which the Ford Ranger pickup uses. The Johson Valley area of the Mojave is home to motorsports series King of the Hammers. It’s a grueling area that is hard on vehicles. We are very excited to see the real Bronco unveiled this spring and are looking forward to learning more about the iconic vehicle.