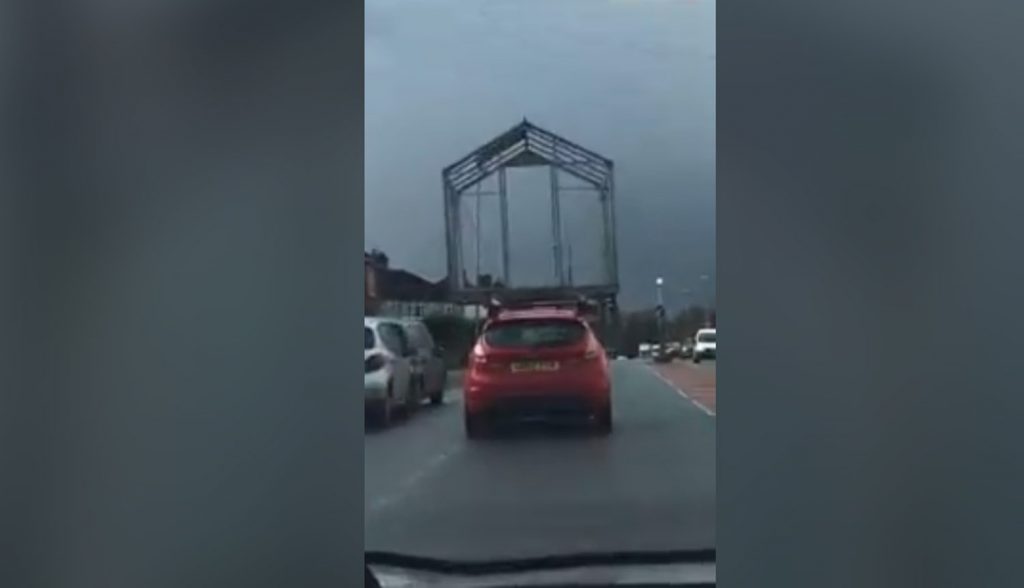 It doesn’t matter where you live in the world people are always doing weird and downright dumb things behind the wheel of a car. We’ve all probably seen trucks hauling oversized items before and not thought much of it. If you’ve ever witnessed someone doing something as strange as the driver of this Ford Fiesta, you certainly wondered what they’re thinking. This video was shot in the UK. This Ford Fiesta driver just had to get their greenhouse home.

Rather than renting a truck or paying someone to haul the building for them, they lifted it and tied it to the roof of their trusty Fiesta. At some points in the video, it looks like the greenhouse frame comes close to hitting overhead wires. To say this kind of thing is dangerous is an understatement. It looked at times as if the driver would be unable to keep the vehicle on the road.

We would assume if the authorities had seen the driver hauling the building, the driver would have been pulled over and received a ticket. A comment on the video says that it happened near Rochdale in England. What is the strangest thing you’ve ever transported on top of a car?

Ford recently announced that it had offered a $30 million settlement to end the class-action lawsuit over the DPS6 transmission used in some Ford Focus and Ford Fiesta vehicles. The settlement also includes provisions for reimbursing people who no longer own the vehicles. It’s unclear if the court will approve the settlement at this point. Ford offered a settlement with a similar monetary payout last year that was denied by the court. This time out, there are other provisions along with the money.

Someone Put A Ford Mustang Front End On An Explorer