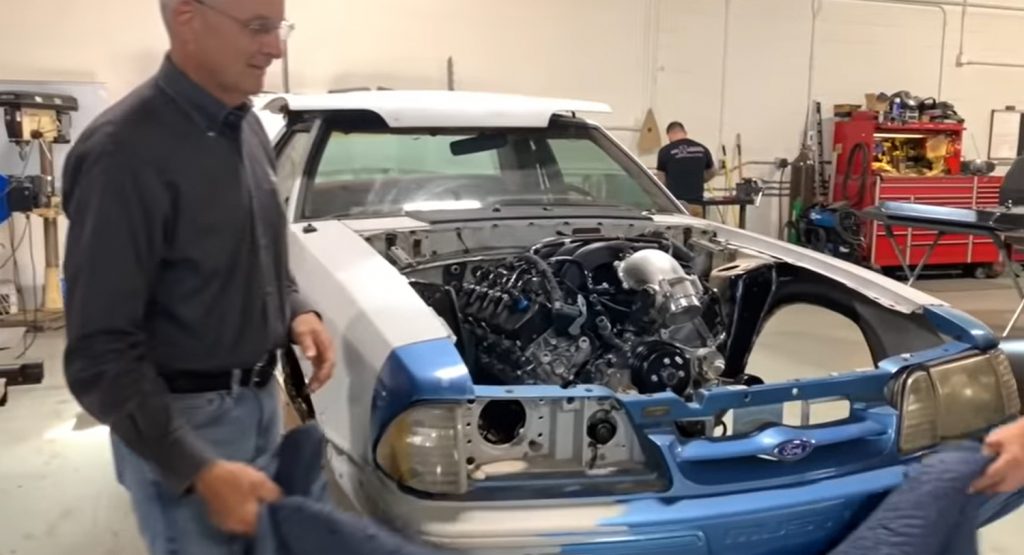 Ford got Mustang fans all excited when it let slip the details that the all-new 7.3-liter Godzilla V8 that is found under the hood of the new Super Duty pickup would fit into the F-150 and the Ford Mustang. While Ford hasn’t indicated that it considered making a Mustang with the 7.3-liter Godzilla V8, many Mustang fans had visions of engine swaps dancing in their heads.

YouTuber REVan Evan dropped by the shop at Team Z Motorsports and found that the gang had taken the hard to find 7.3-liter V8 and crammed it under the hood of a Fox-body Mustang notchback. The engine fits very well under the hood, though it looks a bit tall. That can be fixed with an aftermarket hood.

One impressive factoid from the project is that the Godzilla V8 is 4.5 inches narrower than a Coyote, which has been swapped into the Fox-body chassis multiple times. The gang has been going through a whole series with Godzilla, including tuning the engine to see what sort of power it could muster.

They were able to coax 600 horsepower at the crank, more than 200 horsepower higher than the stock 7.3 can muster. Before anyone gets ideas of their own Godzilla swap, consider that, for now, the engine is hard to get ahold of short of buying a Super Duty. How much a crate Godzilla might cost is unannounced. We also wonder about the low-revving nature of the engine and drag racing applications. Still, a 7.3-liter V8 Fox-body sounds like a lot of fun to us.

Ford went all out designing Godzilla for durability in the truck, and the guys at Team Z say that often what’s designed for durability also is good for performance applications. We are looking forward to seeing the Godzilla Fox-body run.