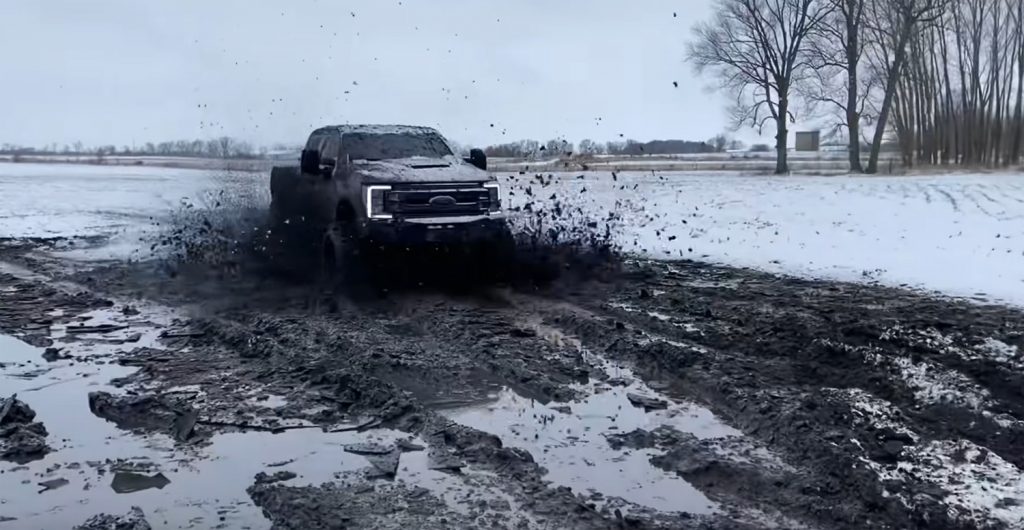 Some people like to spend lots of money on things that others find ridiculous. Case in point are monstrous lifted trucks that look like they can off-road but really are only going to be used on the street. That can be said for most 4×4 SUVs and trucks. The guys aver at WhistlinDiesel went out and spent over $100,000 on an AnyLevel Ford F-350 and flew down to California to pick it up.

It’s a nice vehicle, even if not our taste. Most people who spend that sort of money on a truck would baby the crap out of it, not this dude. He’s back home a few days later ripping donuts in the field and putting the truck into water and mud. We almost feel bad for the high-end custom truck. The truck looks as if it handles the mud well.

The show truck isn’t very show-worthy when they are done with it, but it’s still pretty impressive. At one point they do try and jump the truck and can’t seem to get the big beast off the ground. After acting crazy in the truck for a bit, he says the drive shaft is starting to sound loose. The truck does get stuck and has to get pulled out by a tractor, the front bumper stays on surprisingly, but does get dented.

The truck doesn’t look like it’s doing well later in the video with an upside-down steering wheel when the wheels are straight. We’d not want to have to clean up the truck after it was all said and done. The bent front bumper does get beat back into place with an ax. It does hurt more than a little to see something so nice treated that badly. For a Ford F-350 that most will look at and assume it will be on the pavement all its life, it did well off-road. These are the same guys who put a bunch of light bars on their truck.