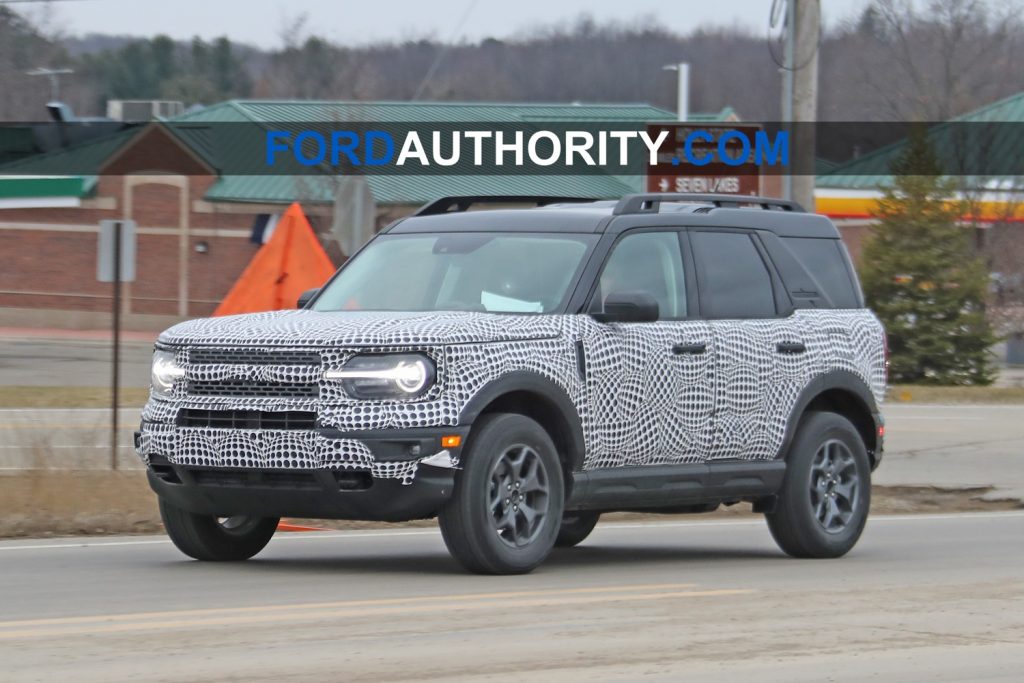 If you’ve been reading Ford Authority, then you’ll likely know that nobody else has delivered as much exclusive news and information about Ford’s upcoming “baby Bronco.” Besides keeping you up to date on all the latest leaks and spy shots, FA was the first to correctly report that Ford is planning two mechanically distinct vehicles as part of the revived Bronco lineup, while also being the first to exclusively report that the unibody model will be called Bronco Sport. And now, we’re delivering yet another exclusive on the upcoming crossover SUV, this time surrounding its interior. 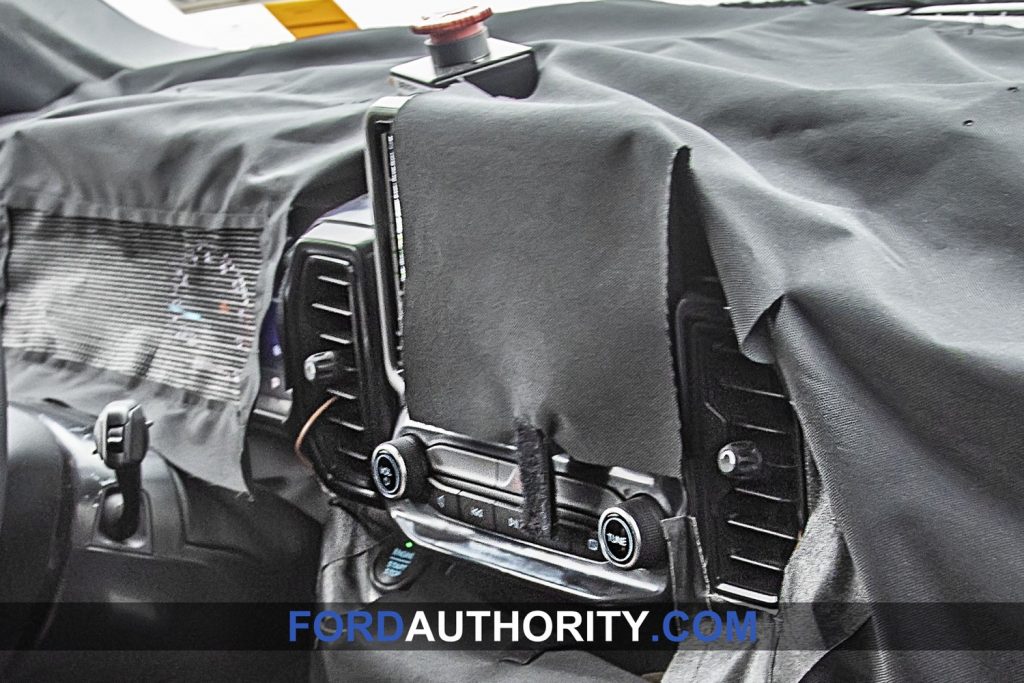 Though we got an early look at the Bronco Sport interior a year ago by way of spy shots, there was plenty that the camouflage didn’t let us see. Luckily, we were able to gather a significant amount of information about the upcoming crossover SUV’s cabin from sources familiar with the project, and have created the following representation of the cockpit’s layout. 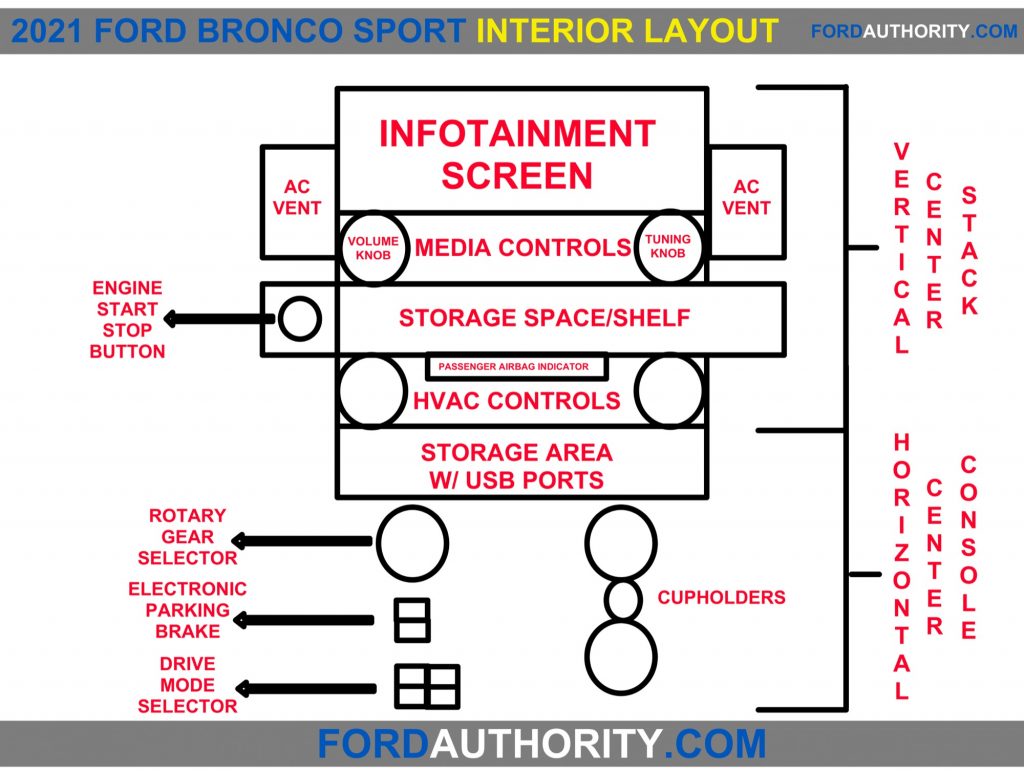 The star of the Ford Bronco Sport cockpit will be a horizontally-oriented infotainment screen that starts at the top of the vertical center stack. Following the screen will be a row of buttons, including a defeat switch for the auto engine stop-start feature and the hazard lights toggle. Immediately below that will be a set of media controls such as next/previous track as well as a back button. These media control buttons will be flanked by circular volume and tuning knobs. 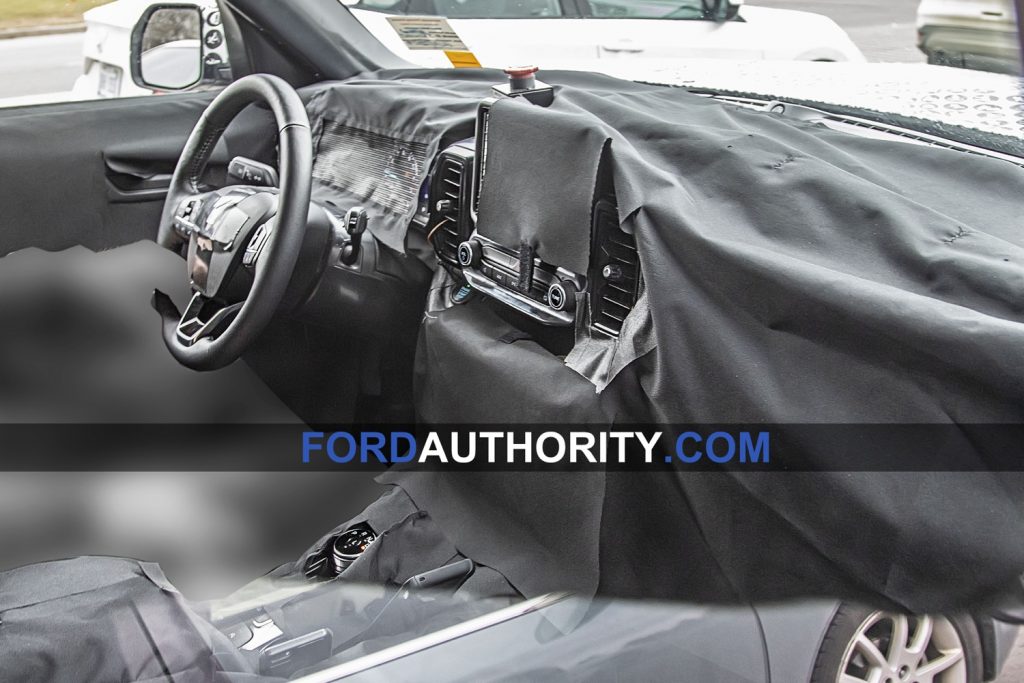 A set of A/C vents in the shape of an irregular hexagon (otherwise known as a convex polygon, for the geometry geeks out there) will flank the aforementioned media screen and media controls.

A storage space/shelf for holding various items like gloves, pens, or a phone will follow the media controls section. That part, in turn, will be followed by a passenger airbag indicator and an HVAC control panel flanked by two circular knobs. The knob closer to the driver will control fan speed, while the one closer to the passenger will adjust the cabin temperature. That rounds out the vertical section of the cockpit, otherwise known as the center stack, bringing us to the horizontal part of the cockpit, aka the center console.

The center console will start with another storage area right below the center stack, this time with back-lit USB ports. Moving rearward, the Ford Bronco Sport interior will feature a rotary gear selector similar to the one used in various new-generation Ford vehicles, such as the 2020 Escape, Edge and 2020 Explorer. However, the Bronco Sport’s rotary shifter will be finished in a different trim: instead of textured metal wrapping the circular knob like on the aforementioned Escape, Edge and Explorer, the unit on the Bronco Sport will have a more rugged, rubberized texture.

That rotary shifter will be followed by an electronic parking brake control and various buttons for selecting the drive mode. Immediately to the right of those elements will be a set of cupholders, with two large receptacles flanking a smaller one in an in-line fashion. 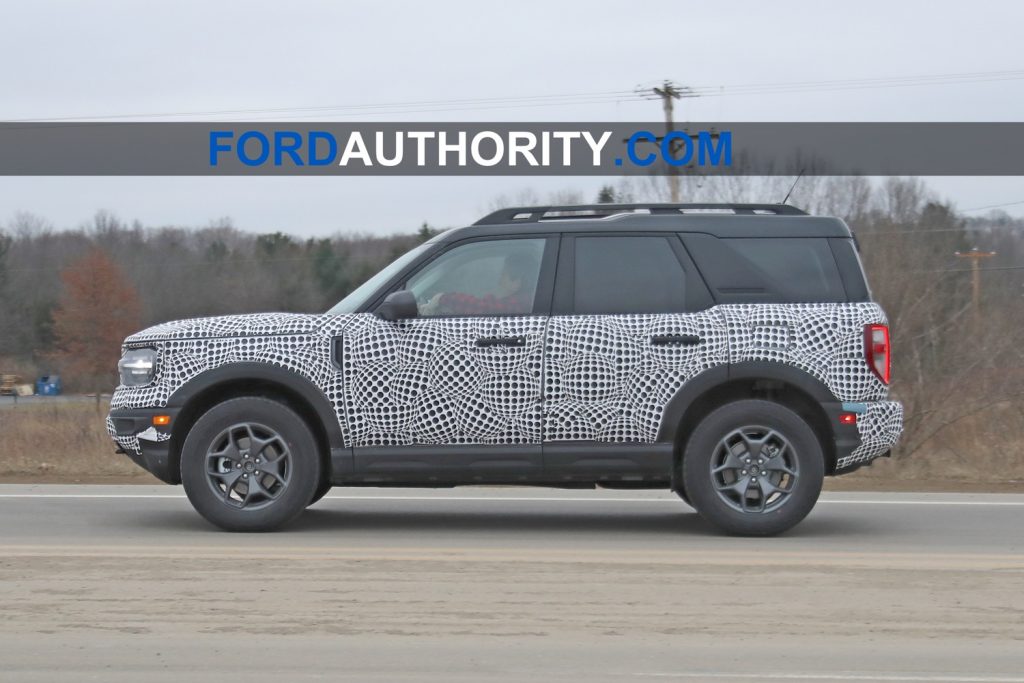 Ford Authority has also learned that the Bronco Sport’s cockpit will feature a tasteful contrasting color treatment. For instance, the space around the engine stop-start button will be finished in a color that contrasts the vast expanses of black hues around the cabin. From there, the contrasting color will make a line around the HVAC vents, infotainment screen and into parts of the dash, before returning to connect with the engine stop/start button beneath the media controls. The same color will also surround an area around the door handles. 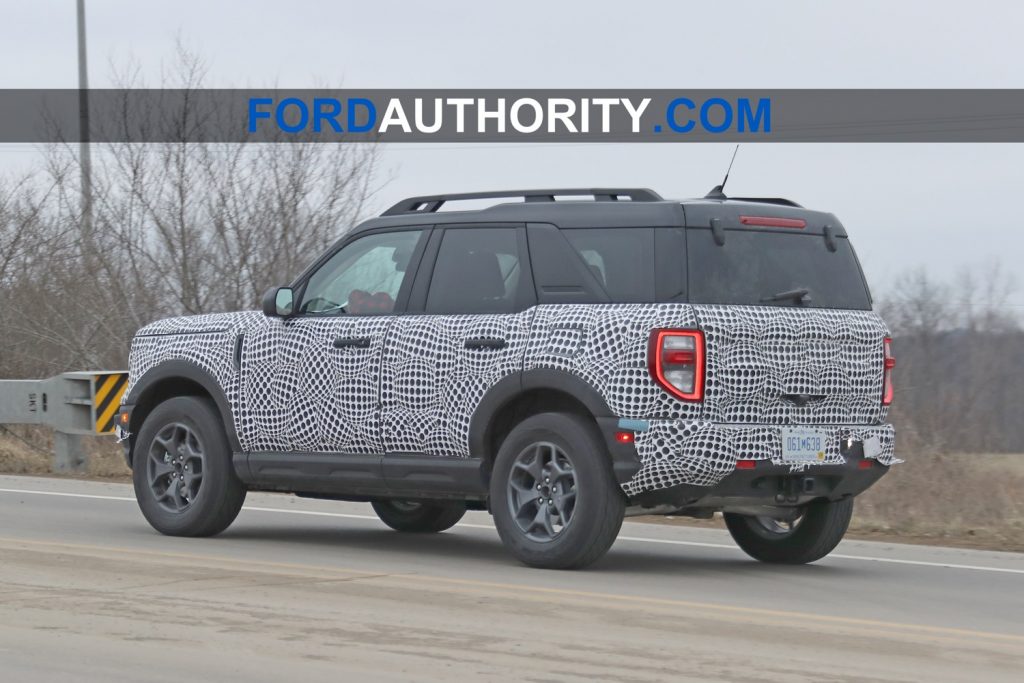 The Ford Bronco Sport was originally slated to be revealed during the first half of the 2020 calendar year and go on sale before the end of 2020. However, the ongoing COVID-19 pandemic will delay both events.

The Bronco Sport will ride on the Ford C2 platform shared with the 2020 Ford Escape and Lincoln Corsair, but will not resemble either of its platform mates. Whereas the 2020 Escape and Corsair feature sweeping, car-like lines, the Bronco Sport will feature a unique, boxy design language. The unibody “baby Bronco” crossover will be joined by the “real” Bronco, which will ride on a body-on-frame architecture derived from the Ford T6 platform that underpins the Ford Ranger and international-market Ford Everest. The body-on-frame Bronco will then be available in two- and four-door body styles; a pickup truck variant will also be part of the lineup.

We’ll have more on the Ford Bronco Sport, so be sure to subscribe to Ford Authority for more Bronco Sport news, Ford Bronco news and around-the-clock Ford news coverage.