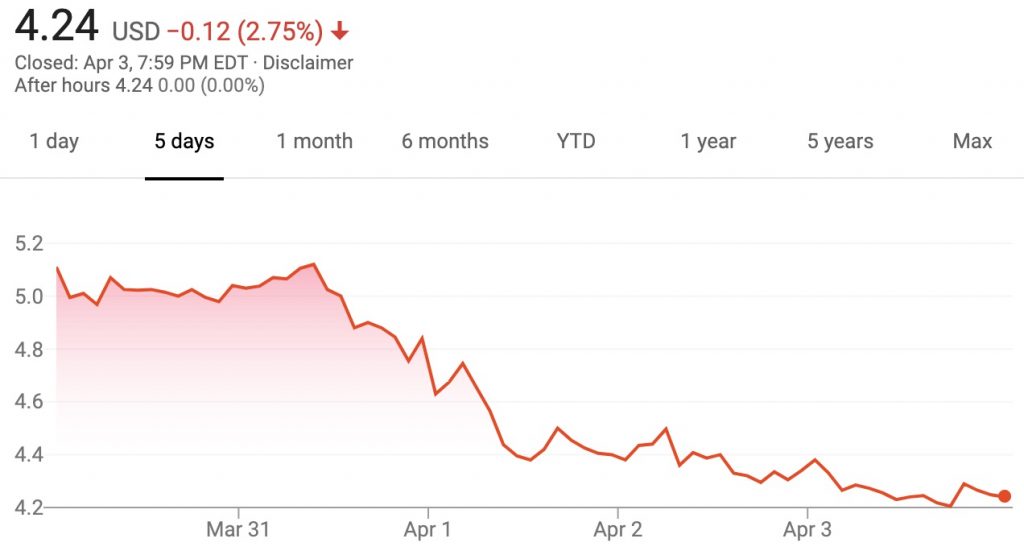 Ford share values continue to see historic lows amid the COVID-19 pandemic, with some of the lowest recorded values in over a decade. The current value of $4.24 is less than half the $9.42 per share value that Ford stock opened the 2020 calendar year.

The ongoing Coronavirus has resulted in the automaker temporarily shutting down production in North America as well as in other markets, and suspending its dividend as it borrows $15.4 billion.

Ford was having its fair share of issues prior to the global COVID-19 outbreak, among which were lack of profitability in several vehicle lines and in various international markets, along with quality issues in key product launches. Ford CEO Jim Hackett recently changed things up on the FoMoCo executive roster, replacing Joe Hinrichs with Jim Farley as COO, allegedly as a result of a botched rollout of the all-new 2020 Ford Explorer and Lincoln Aviator – two key models at a critical time for The Blue Oval.

By comparison, shares of Ford’s cross-town rival – General Motors Company – decreased $3.24 per share, or 16 percent – during the March 30th, 2020 – April 3rd, 2020 timeframe. Other automakers and many other publicly-traded companies outside the auto sector also experienced similar drops in value as Ford and GM.

We’ll keep following this closely, so be sure to subscribe to Ford Authority for ongoing Ford stock news and complete Ford news coverage.