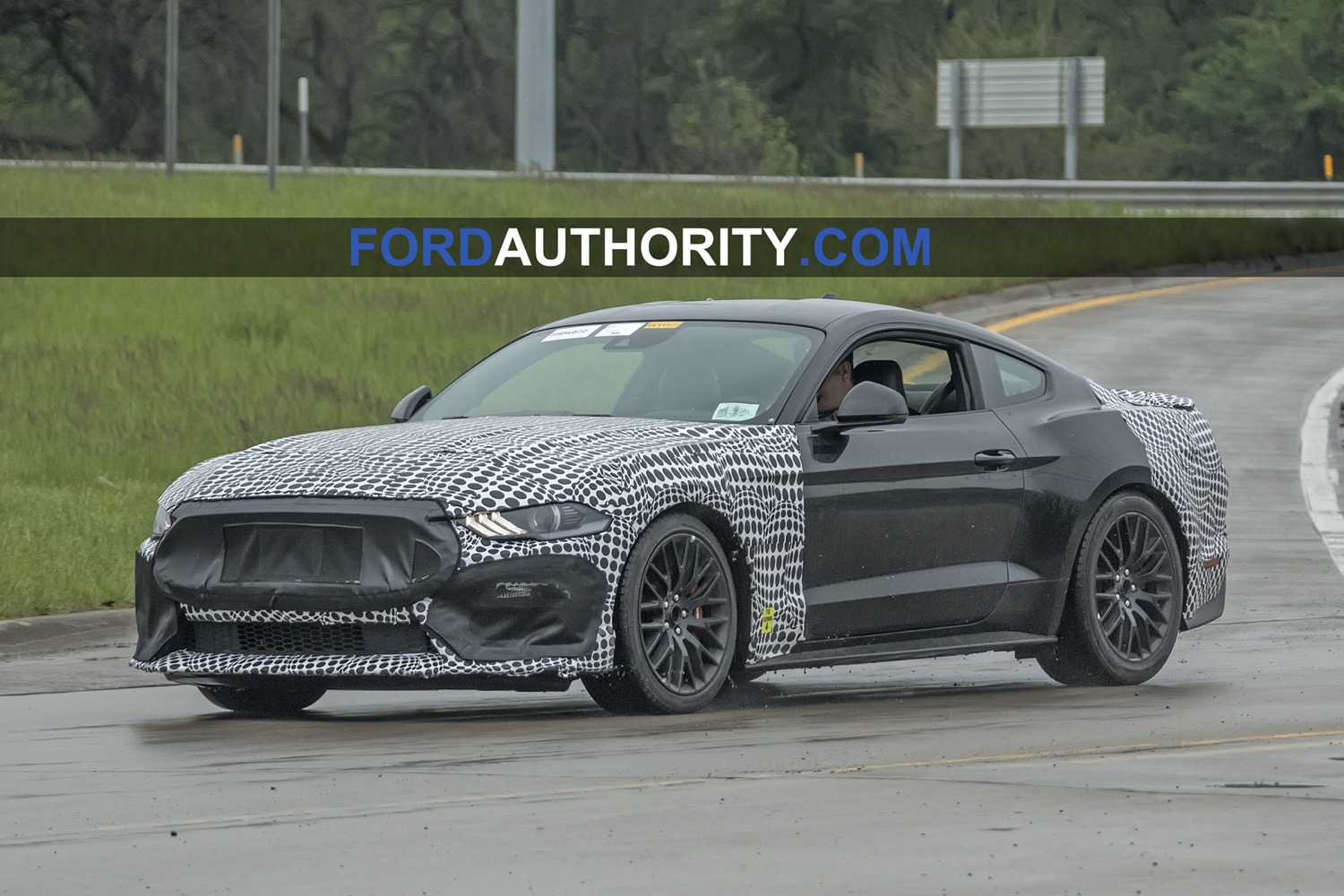 We’re still a couple of years away from the all-new next-gen, S650 Ford Mustang, which is due to arrive in 2022 as a 2023 model year vehicle. But after the car’s last round of updates in 2018, a small 2021 Mustang facelift is expected as a way to keep Ford’s pony car fresh until the all-new, 2023 Mustang arrives. We caught a 2021 Mustang prototype out testing in the wild earlier this year, and now we’ve come across yet another one. 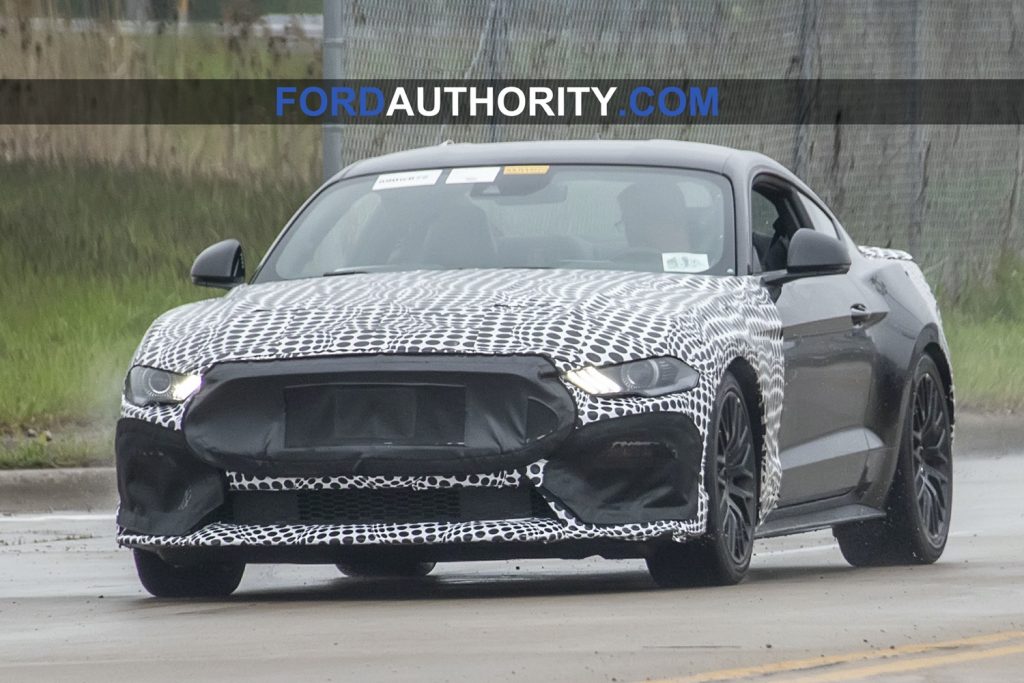 Unfortunately, it’s difficult to discern what sort of changes to expect from the 2021 Mustang facelift from these photos, as the car is heavily camouflaged at both the front and rear, but there are a few things worth noting, starting with the front end.

There, beneath the new-for-2018 headlights lie a pair of large openings in the camo, which could mean larger air intakes such as those present on the 2021 Mustang Mach 1. 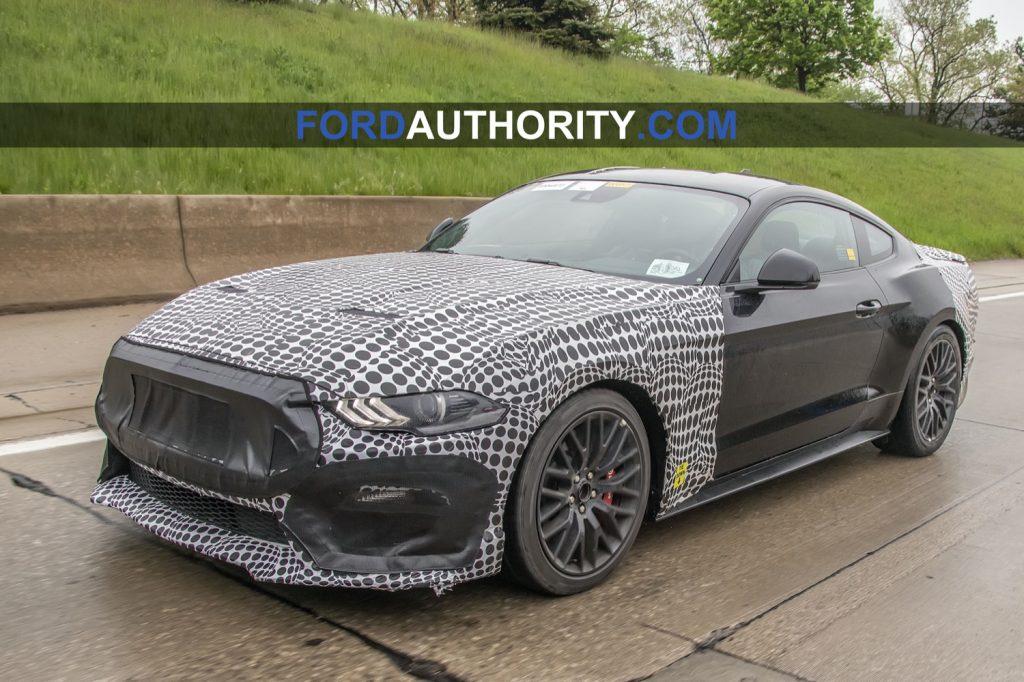 The upper grille and chin spoiler are completely covered, so there very well could be some updates there as well. The lower grille, however, is completely bare and looks identical to the one on the current Mustang. The hood, meanwhile, appears to be unchanged. It’s clear that the side profile will remain unchanged. 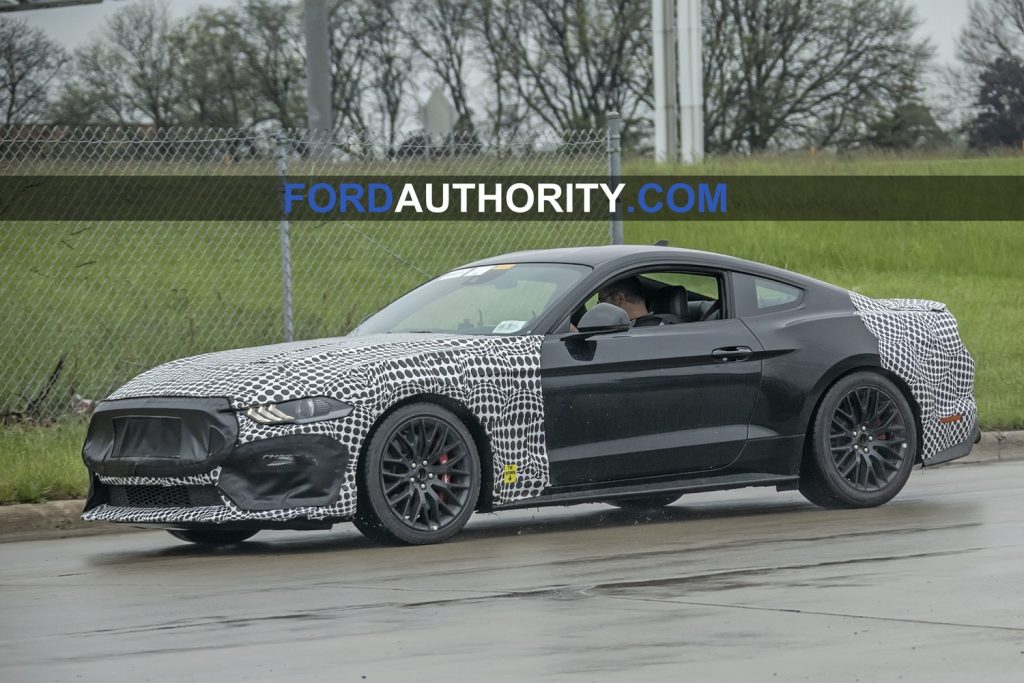 This particular prototype is also wearing a set of Performance Pack 1 wheels, though the center caps appear to be missing – which is to be expected on a prototype. Behind the wheels, we can clearly see red brake calipers with white letters. This is different from the current PP1 Mustang, which wears black Brembo brake calipers with red lettering. 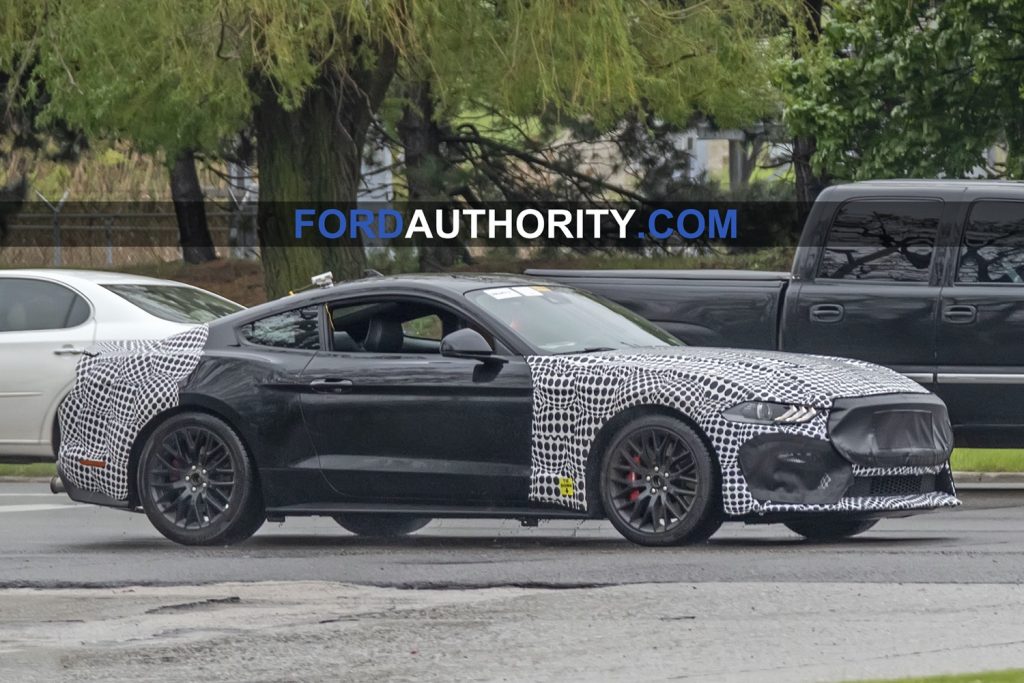 Perhaps the most interesting thing to note about this potential 2021 Mustang facelift lies in the rear, however. There, this particular prototype is sporting clear tail lamp lenses. Currently, these taillights are found on European-market Mustangs, though many U.S.-based enthusiasts purchase them second-hand or via the aftermarket and switch them out. 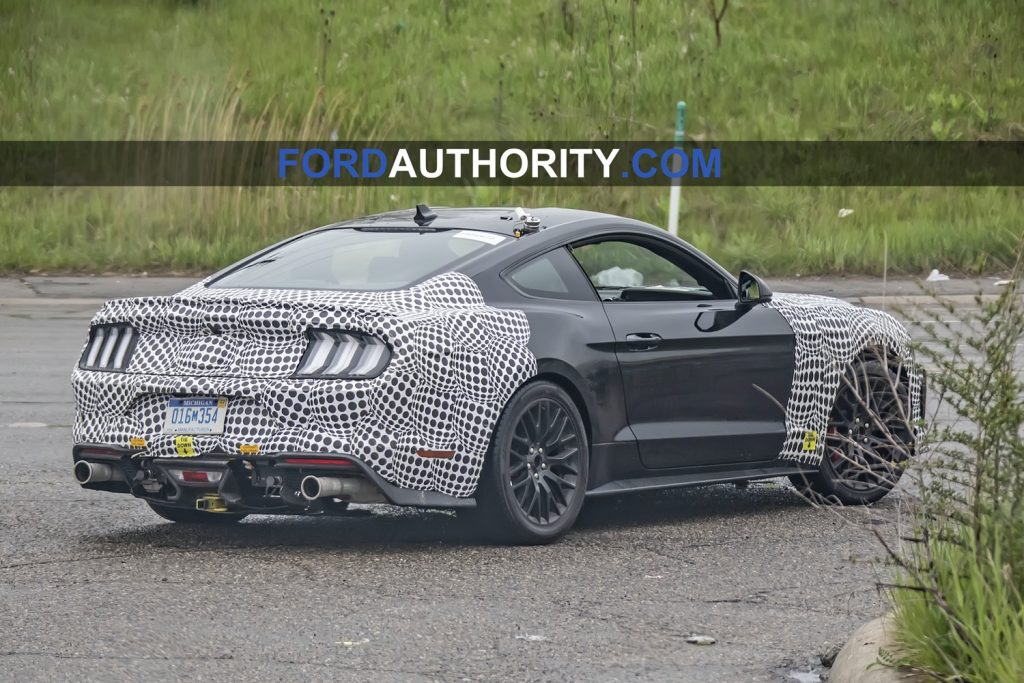 So that begs the question – is this just a European market Mustang, or perhaps Ford just had an extra set of these taillights in the parts bin? Or maybe it will offer them on the refreshed 2021 Mustang? Only time will tell. 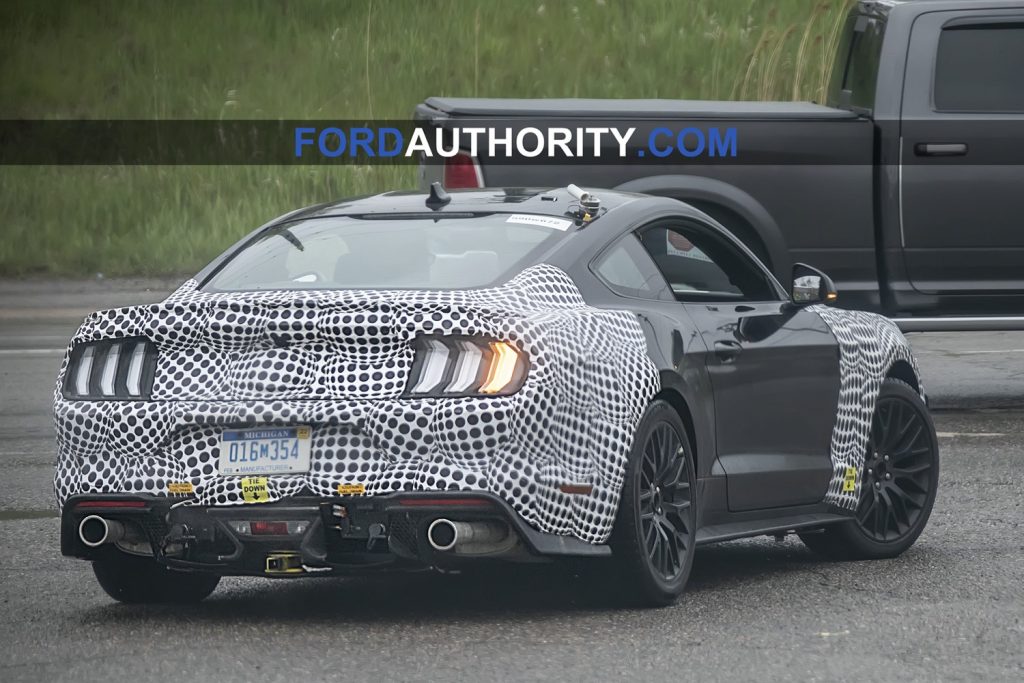 Otherwise, this prototype appears to have a very slim rear spoiler protruding from the decklid, while the exhaust has been replaced by an emissions testing device.

The 2021 Mustang will also see the discontinuation of the Bullitt and Shelby GT350 variants, as well as the return of the already-announced Mach 1. Slight changes in exterior color choices and trim level features are also expected. Engine choices will consist of the Ford 2.3L EcoBoost I4 for EcoBoost models, the Ford 5.0L Coyote V8 for Mustang GT and Mach 1 models, and the supercharged Ford 5.2L Predator V8 for the Shelby GT500. 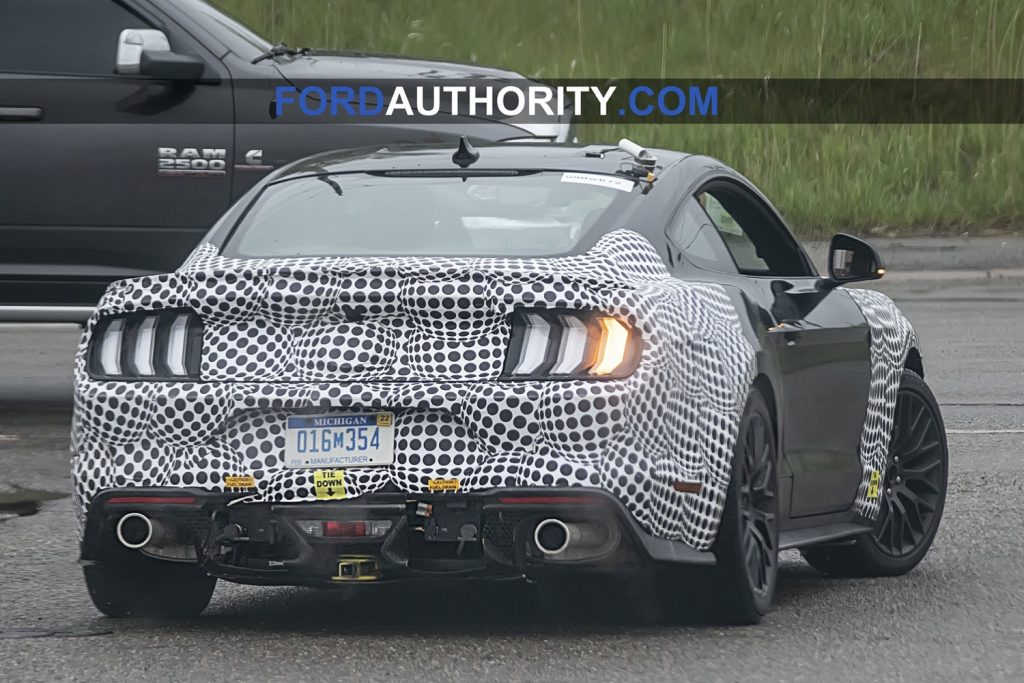 A ten-speed automatic transmission and a six-speed manual transmission will continue being offered with EcoBoost and GT models. The Shelby GT500 is offered exclusively with a seven-speed dual clutch supplied by Tremec. The Mach 1 will offer a Tremec-sourced six-speed manual or Ford’s ten-speed auto, while the Mach 1 with the optional Handling Package will exclusively offer the Tremec-sourced six-speed stick. 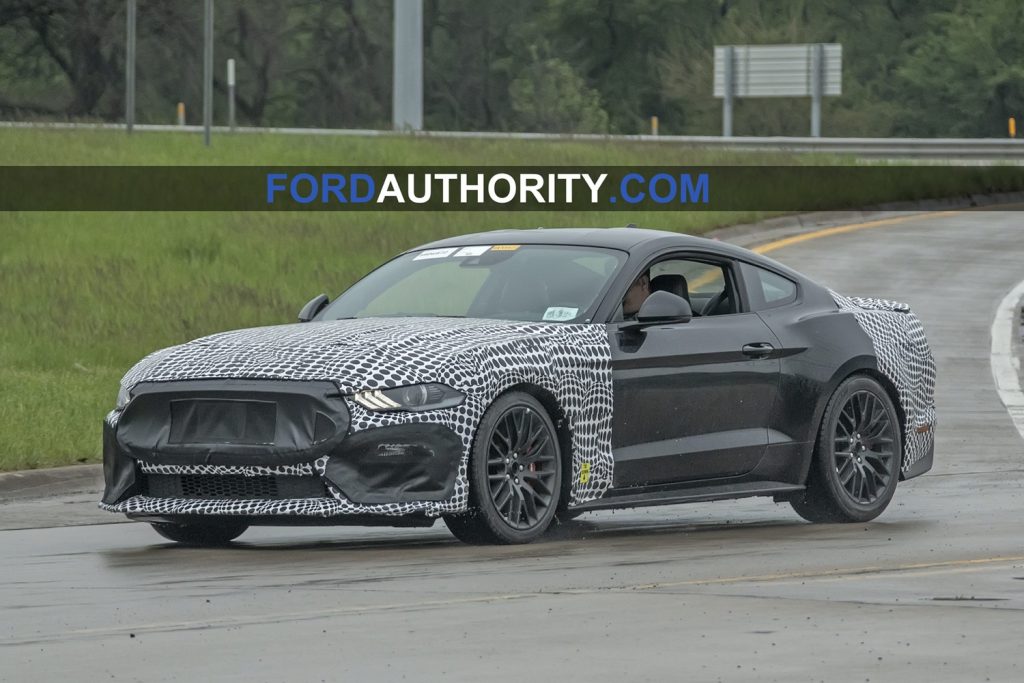 The 2021 Ford Mustang will continue being produced at the Ford Flat Rock Assembly Plant in Michigan, and we expect the facelifted model to arrive during the third quarter of the 2020 calendar year.

We’ll have much more on the 2021 Mustang facelift soon, so be sure to subscribe to Ford Authority for more Ford Mustang news and around-the-clock Ford news coverage.