It’s been a little over two years since Ford Co-Pilot360 originally debuted as a suite of driver-assist technologies. At the time, it consisted of automatic emergency braking with pedestrian detection, blind spot information system, lane keeping system, rear backup camera, and auto high beam lighting technology, and first saw duty in the 2019 Ford Edge and Edge ST. Now, it appears that Ford Co-Pilot360 is on the verge of some sort of update, according to Ford North America Product Communications manager Mike Levine. Levine tweeted out an ominous and short message today that simply read “some super cool Ford Co-Pilot360 news to share tomorrow.” What, exactly, this news is remains a total and complete mystery. But we have to imagine that it’ll be some sort of update, or perhaps the addition of a totally new driver-assist technology or technologies.

Two years ago, Co-Pilot360 was the cream of its proverbial crop in the automotive world, providing more driver-assist technologies than any other non-luxury car brand at that time. But technology changes quickly, so it’s probably time for an update. A few months prior to the original rollout of Co-Pilot360, Ford had just signed an agreement with the US National Highway Traffic Safety Administration to make automatic braking systems standard by September, 2022. 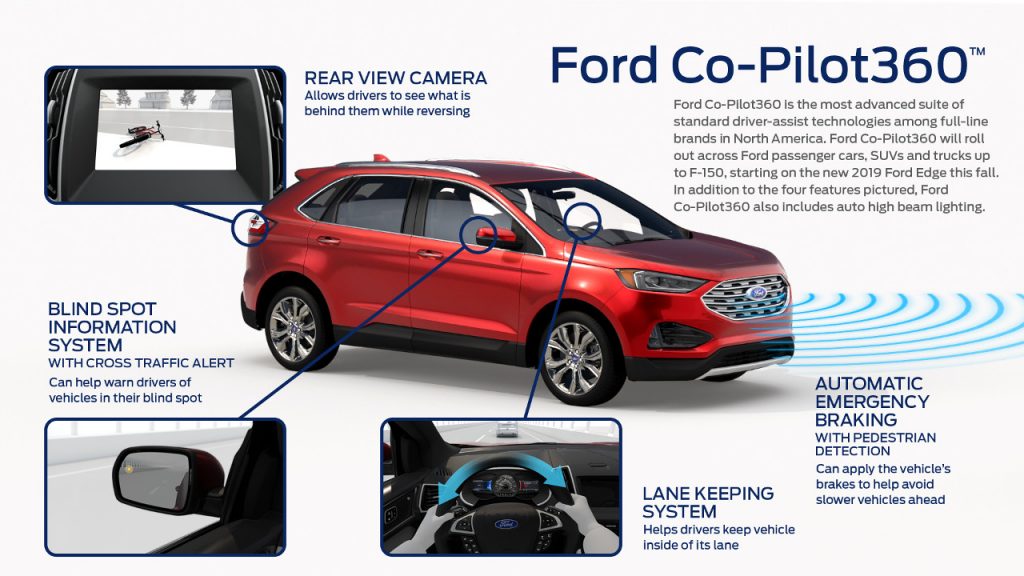 Since then, Ford has also added reverse brake assist with AEB in the North America and Asia Pacific markets, and is investing $500 million over five years to develop more driver-assist and active safety technologies.

It’s also quite possible that Ford has made the decision to offer a larger suite of Co-Pilot360 technologies available on less expensive models or as standard equipment. The automaker recently got called out by Consumer Reports for the fact that Ford F-150 buyers must opt for pricey trim levels in order to have access to blind spot warning technology.

For now, we’ll just have to wait and see what happens tomorrow. But it’s probably a good bet that future Ford vehicles will only bet getting smarter, and most importantly, safer.

We’ll have more on this as soon as it’s available, so be sure to subscribe to Ford Authority for 24/7 Ford news coverage.