In the initial Bronco Raptor spy shots we shared earlier this month, we weren’t able to confirm the prototype’s exact wheel and tire sizes. However, our spies have captured some additional photos of this Bronco Raptor / Bronco Warthog prototype out testing, and thanks to some bright sunlight and sharp camera focus, we can now provide additional details about its rolling stock. 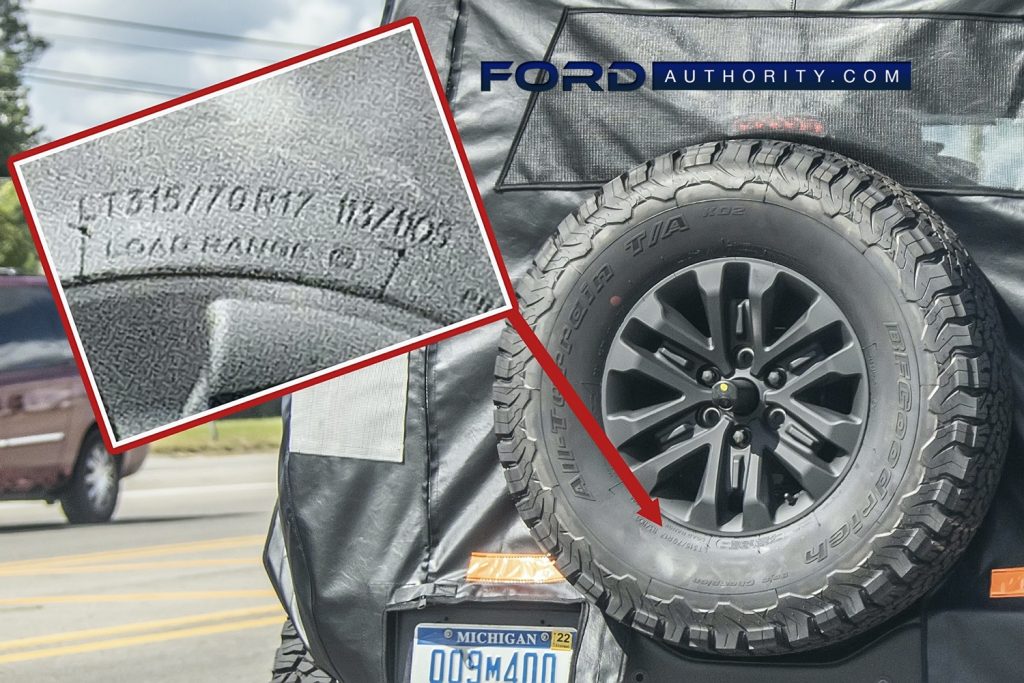 The Bronco Raptor/Warthog is running the same size BFGoodrich All-Terrain T/A KO2 tires as the Ford Bronco models equipped with the Sasquatch Package – LT315/70R17. That means the prototype is also running 17 inch wheels, of course, which in this case are styled very much like those found on the current-gen Ford F-150 Raptor. The Bronco Raptor prototype’s wheels are non-beadlock capable, however, unlike the ones that will come on Sasquatch Package-equipped Broncos. 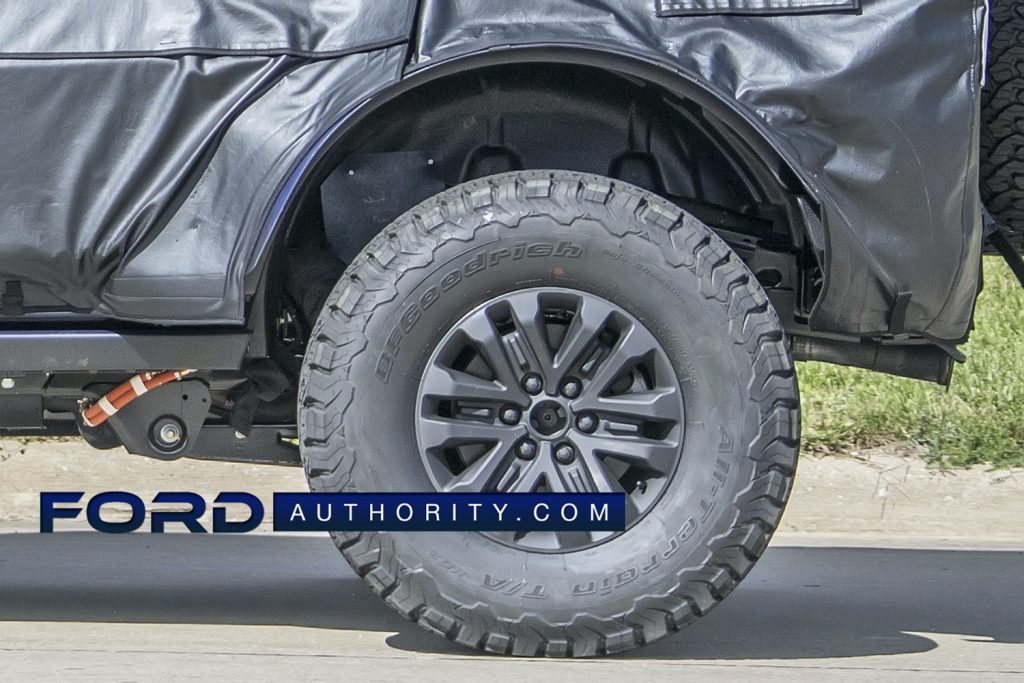 As Ford Authority exclusively reported a couple of weeks ago, the forthcoming performance variant of the Bronco will have a wider stance than non-Raptor/Warthog models. Recent spy shots and some high-flying testing pictures from Ford indicate that it will also use the same Fox Live Valve shock technology as the current-gen F-150 Raptor, in addition to a host of other suspension upgrades. 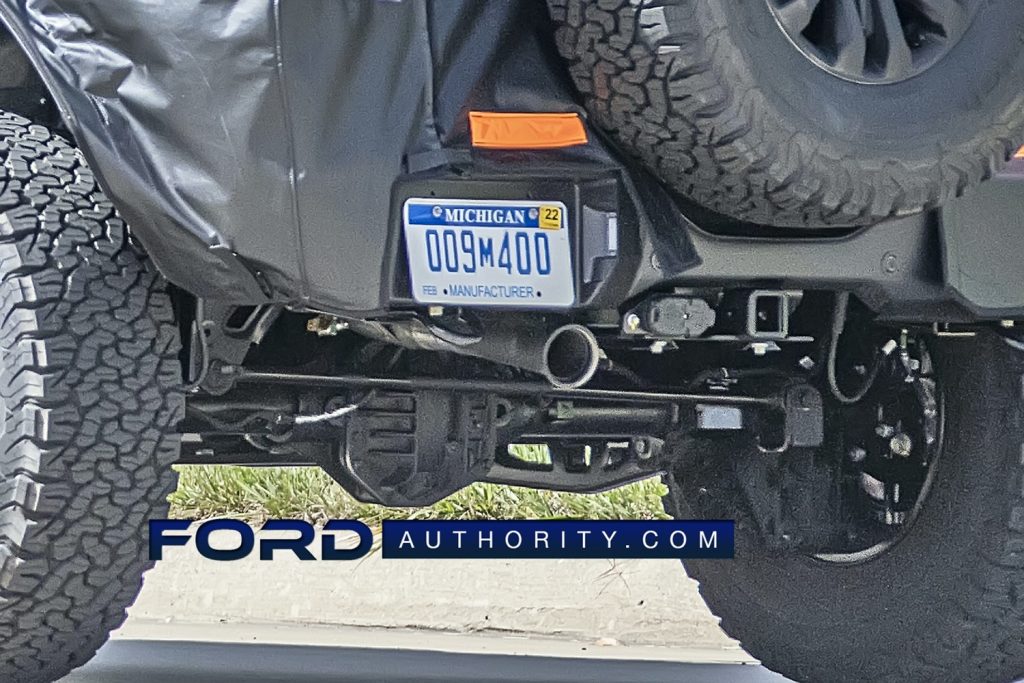 The Bronco Raptor will also feature unique front and rear fascias and bumper treatments, a single-exit, dual-tip exhaust located on the driver’s side, higher ground clearance and a wider stance than other Bronco variants, more pronounced fenders, and the aforementioned wheels that bear a resemblance to those used on the current F-150 Raptor and Ranger Tremor. 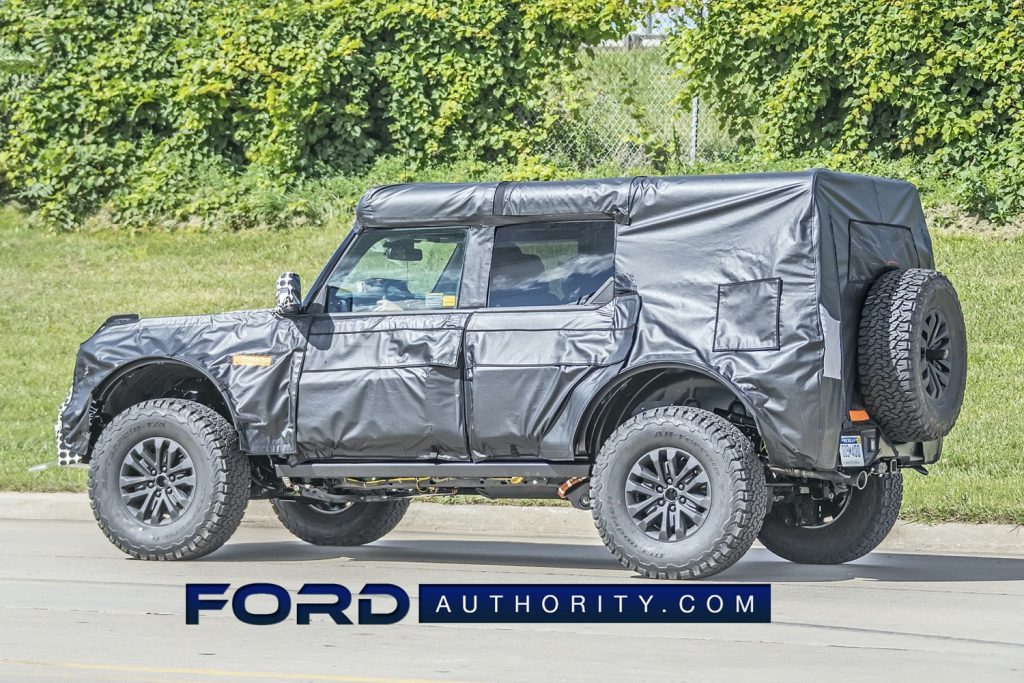 The Bronco Raptor will be powered by Ford’s twin-turbocharged 3.0L EcoBoost V6 mated to the 10-speed automatic transmission, though a hybrid might be offered later on in the model’s lifecycle. No manual transmission option is currently planned.

We’ll have more on the Bronco Raptor/Warthog very soon, so be sure and subscribe to Ford Authority for more Bronco Raptor news, Ford Bronco news and ongoing Ford news coverage.