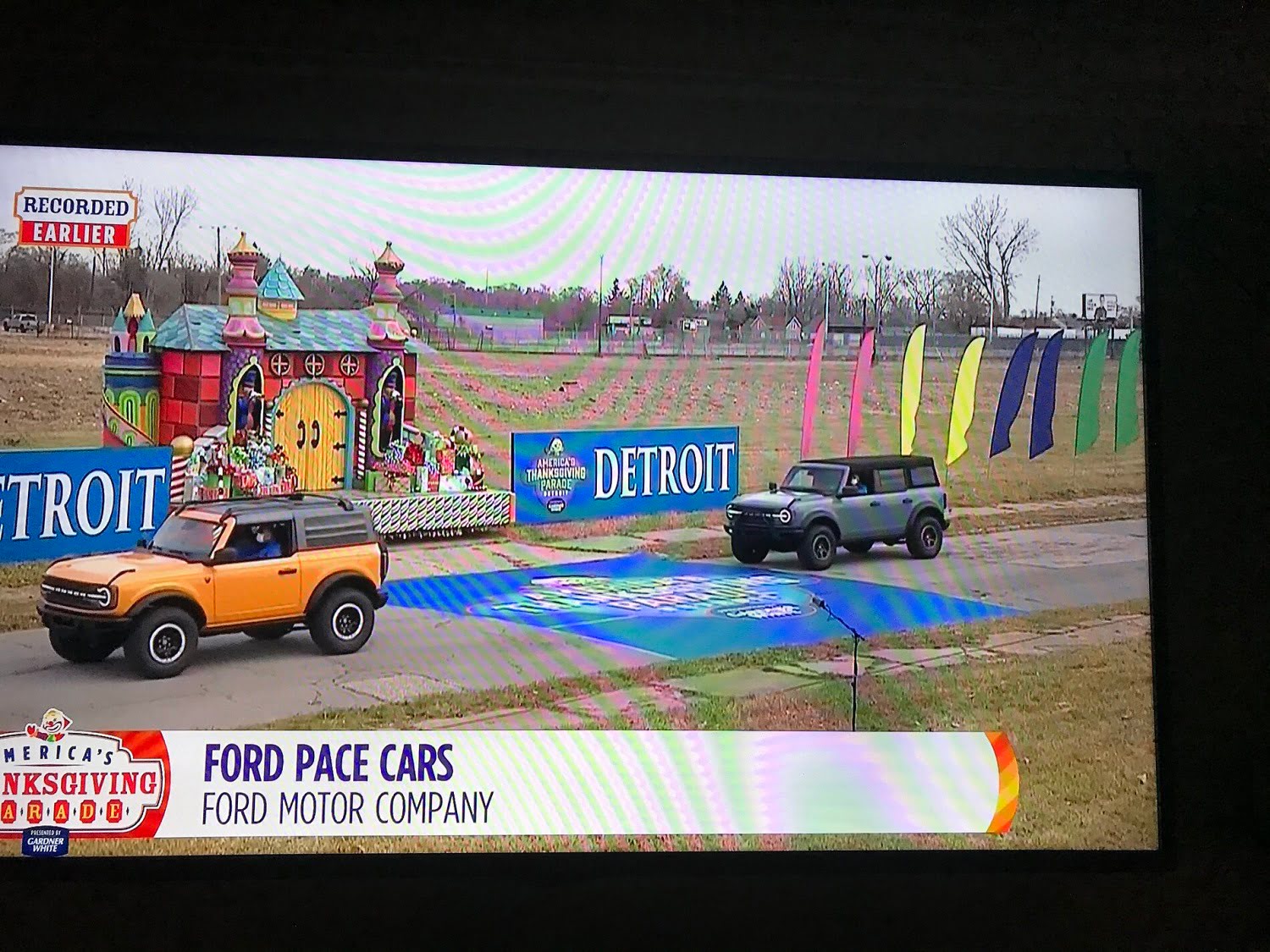 The 2021 Ford Bronco and 2021 Ford Bronco Sport represent a new era for Ford as the company transitions away from sedans and passenger cars towards utility vehicles and pickups. Although the models debuted several months ago, The Blue Oval decided to show its new Bronco lineup at the 2020 America’s Thanksgiving Parade, a Detroit-area Thanksgiving event, where the off-roaders served as pace cars. While the parade this year switched to a virtual format due to COVID-19, it’s nice to see Ford continuing to promote its new products in the challenging new environment. 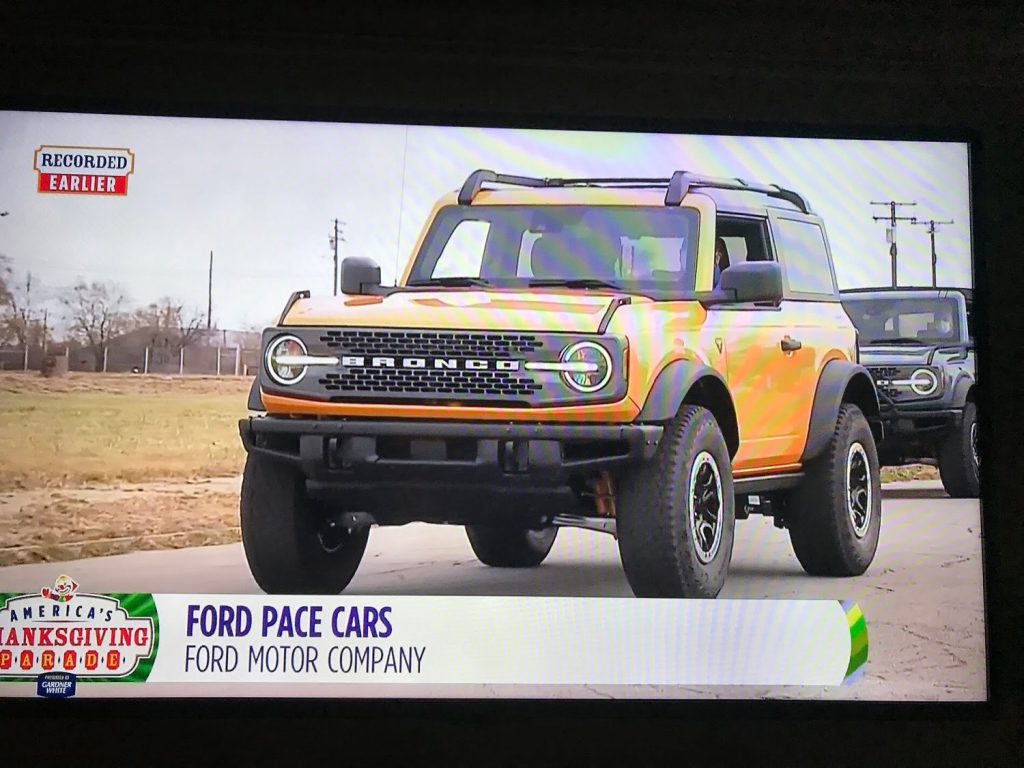 While the pictures, posted on Bronco6G, we can still easily determine what models in the Bronco lineup Ford decided to bring to the parade. First up was a 2021 Bronco Badlands painted in Cyber Orange. It wasn’t just any ordinary Badlands model either, because it sported the Sasquatch Package, which includes 17-inch high-gloss black painted alloys with beadlock capable wheels, a high clearance suspension, and high clearance fender flares that are a bit wider than the standard ones.

Ford also installed a set of roof rails with crossbars on this particular Bronco, which the company will offer as an accessory for buyers at the time of purchase. They require the Molded-In-Color (MIC) hardtop, which is standard on all two door models. 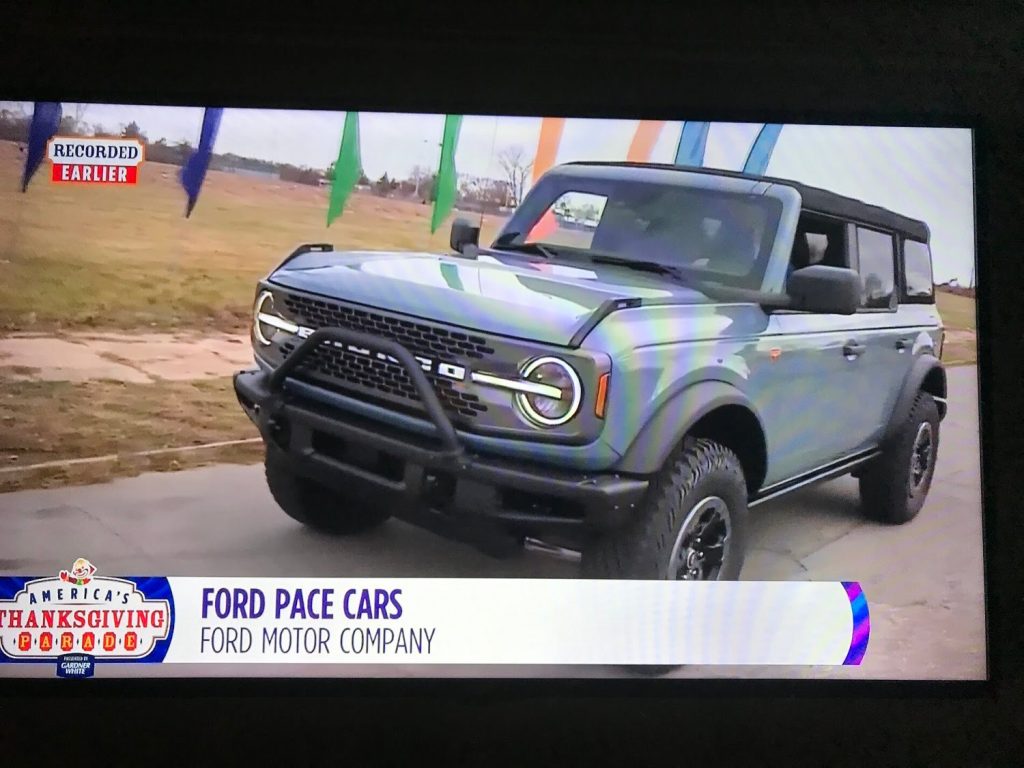 Next up was a soft top four door Bronco Badlands clad in Area 51 – Ford’s name for this particular shade of light blue. This particular Bronco did not feature the Sasquatch Package, but it did have the optional black 17-inch high-gloss painted alloy wheels. The Blue Oval also installed the available brush guard up front. Like the roof rails, the brush guard will be available in the Bronco lineup as an accessory, though it requires the heavy duty modular front bumper, which is standard on Black Diamond, Badlands, and First Edition models and available as an option on all other trims. 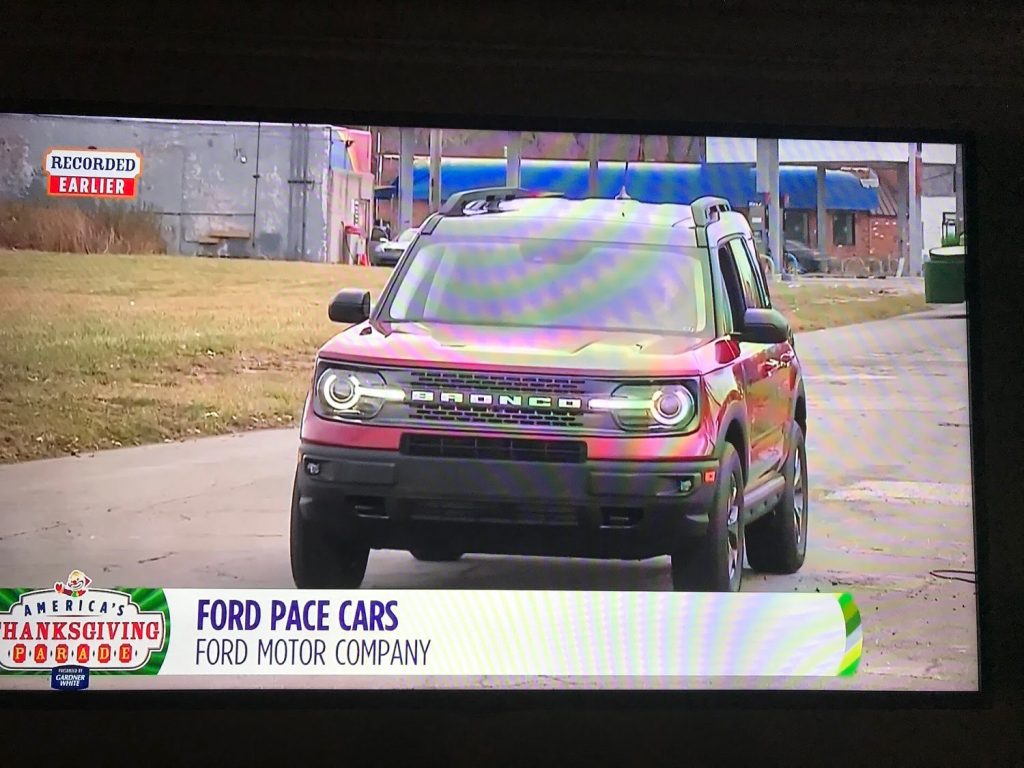 Last but certainly not least, a Bronco Sport Badlands rounded out the rear of the Bronco lineup. The Rapid Red painted Sport did not take after its larger siblings, eschewing any optional accessories. That said, it will still offer buyers some extra off-road capability, as the trim comes standard with an advanced 4X4 system with a twin-clutch rear drive unit, metal bash plates, and 17-inch all-terrain off-road tires.

In any event, the trio of Broncos Ford brought to the parade was a nice bit of free advertising, and it’s cool to see the upcoming models out strutting their stuff. The regular Bronco is slated to arrive at dealers next spring, but the Bronco Sport should be in showrooms within the next month or so.

Interested in having the latest on the revived Bronco lineup? Then subscribe to Ford Authority for the latest Ford Bronco News, Ford Bronco Sport news, and around-the-clock Ford news coverage.