The value of Ford stock increased during the November 16th, 2020 – November 20th, 2020 timeframe. Shares closed the week at $8.74 per share, which represents an increase of $0.20 per share, or 2 percent, compared to the prior week’s closing value of $8.54. Notably, the value has continued to increase to $8.86 per share in Monday trading. 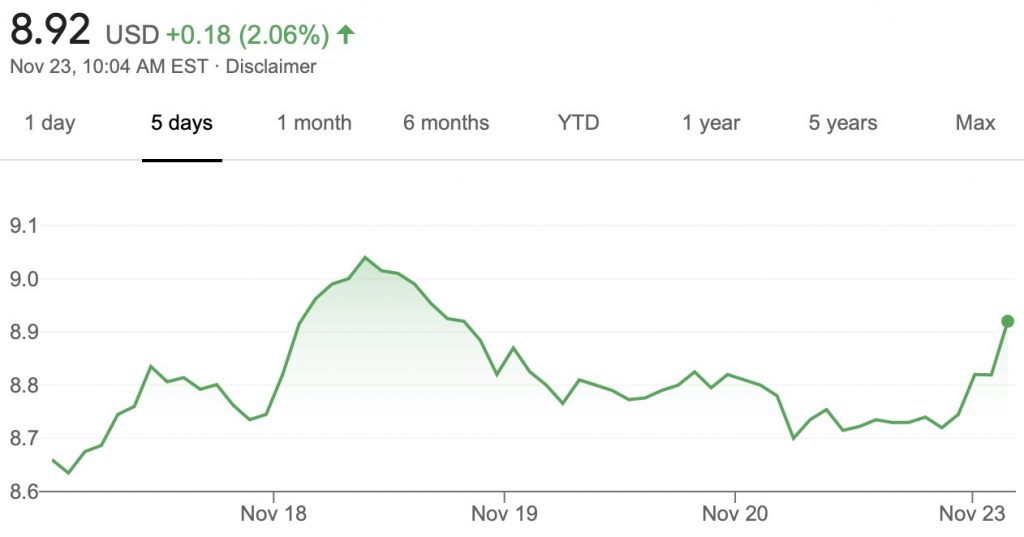 The slight increase in Ford share values this week comes after a jump of 10 percent last week, which is welcomed news after a period of fluctuating values. Last week, various analysts have rated Ford stock as a buy. Meanwhile, other investors have noted that they believe that Ford’s dividend suspension will soon end, and that The Blue Oval is currently being run in a similar fashion to a big tech company, a rather appealing attribute to those who are looking for optimal ROI.

The Dearborn-based automaker’s third quarter 2020 earnings, which were headlined by $2.4 billion in net income on revenue of $37.5 billion, offered a surge of momentum for Ford stock. During the timeframe, sales decreased 5 percent to 551,796 units in the U.S., representing a very healthy recovery in light of the COVID-19 pandemic. It’s worth noting that Ford stock jumped 5 percent when the automaker reported its Q3 earnings, marking the largest single-day percentage gain since June 5th.

Ford stock has seen historically-low values during the COVID-19 pandemic, with some being the lowest recorded in over a decade. This week’s $8.74 per share price places the value $0.68 below the $9.42 per share mark at which Ford stock opened the 2020 calendar year.

Production of the Mach-E kicked off in late October, and the very first units of the all-new Ford Mustang Mach-E will begin arriving at dealers shortly. The Mach-E is an electric, four-door crossover-like hatch inspired by the legendary Mustang pony car. More than anything else, the Mustang Mach-E demonstrates that Ford isn’t afraid to redefine legendary nameplates, and recreate them in new body styles and as new vehicle types.

Ford initially sold out the introductory Mustang Mach-E First Edition variant – a promising development that should serve as an indicator of future Ford share values. However, First Editions of the vehicle recently became available once again as a result of higher production. Pricing for the 2021 Mach-E, which will start at $43,895, as Ford Authority recently reported.