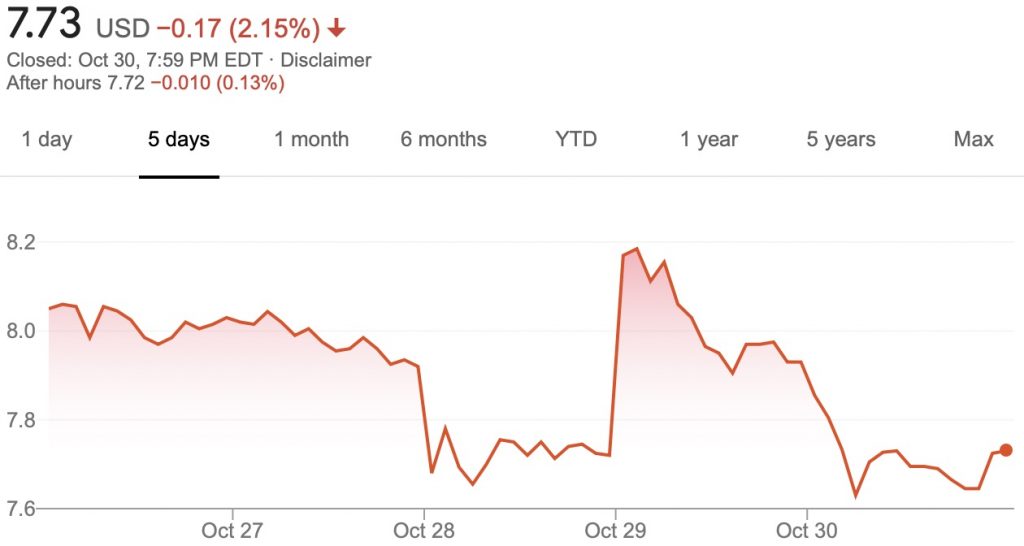 It’s worth highlighting that Ford shares have risen $3.72 since hitting a low of $4.01 on March 23rd. Meanwhile, the 5 percent growth experienced last Thursday – when Ford reported its Q3 earnings – marked the largest single-day percentage gain since June 5th.

At the heart of the movement is Ford’s third quarter 2020 earnings, headlined by $2.4 billion in net income on revenue of $37.5 billion. The results follow the automaker’s Q3 2020 sales results, which decreased 5 percent to 551,796 units in the U.S., representing a very healthy recovery in light of the COVID-19 pandemic.

Additionally, Ford sales were up 25 percent in China during the third quarter of 2020, building on the three percent growth experienced during the second quarter of 2020. Notably, Q3 2020 represented FoMoCo’s single biggest sales increase in China since 2016.

It’s worth noting that Ford CEO Jim Farley’s recent statements on affordable EVs and his desire to curb warranty costs could be influencing current values.

Besides the Bronco and Bronco Sport, Ford also recently unveiled the all-new 2021 F-150 – its most profitable and revenue-generating product. The all-new half-ton, full-size pickup features a significant amount of updates and new features, along with an all-new exterior and interior.

Production of the 2021 F-150 started on September 17th, 2020 at the Ford Dearborn Truck plant within the Ford Rouge Center complex. The truck will see a gradual rollout before hitting full stride in roughly two or three quarters following the start of production. Additionally, Ford just announced a new plant within the Rouge Center. Termed the Ford electric vehicle center, the new facility will build the upcoming electric F-150, which is slated for launch in 2022.

Prior to the reveals of the F-150 and Bronco family, Ford and Volkswagen agreed upon the finer details of a new partnership wherein both automakers will officially develop and produce several vehicles. Additionally, the tie-up will see VW invest several billion in Argo AI, an autonomous software firm backed by Ford. Speaking of partnerships, recent reports indicate the Ford-Rivian partnership is “going great” and that a new Ford model is still on track.

Ford stock has seen historically-low values during the COVID-19 pandemic, with some being the lowest recorded in over a decade. This week’s $7.73 per share price places the value $1.69 below the $9.42 per share mark at which Ford stock opened the 2020 calendar year.