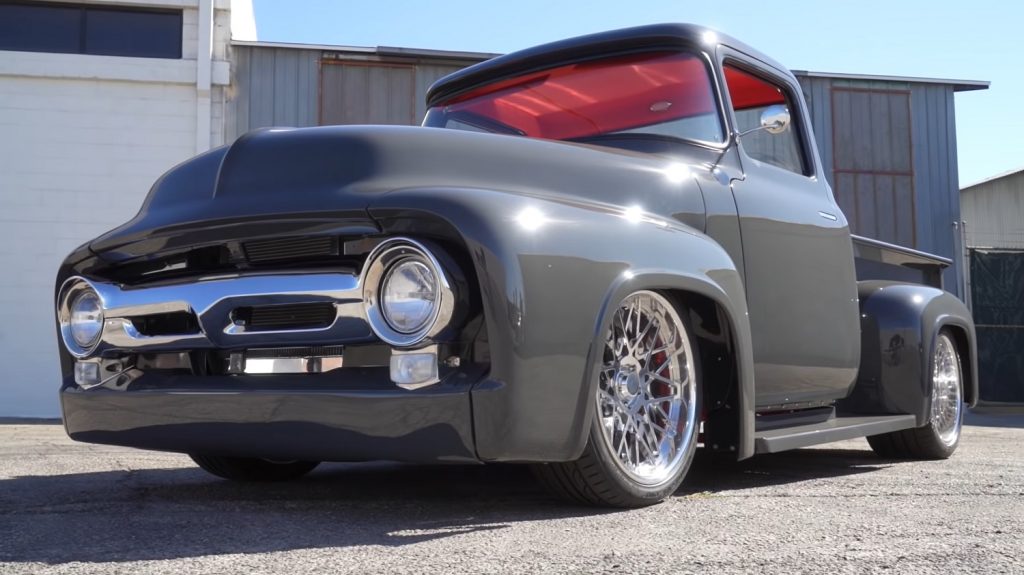 The second-generation Ford F-Series, produced between 1953-1956, has long been a favorite among Blue Oval fans and classic vehicle enthusiasts for its handsome looks and customization potential. And that is on full display with this gorgeous 1956 Ford F-100 restomod, which has been treated to a full overhaul from its slick body to the mechanicals that lie beneath it. 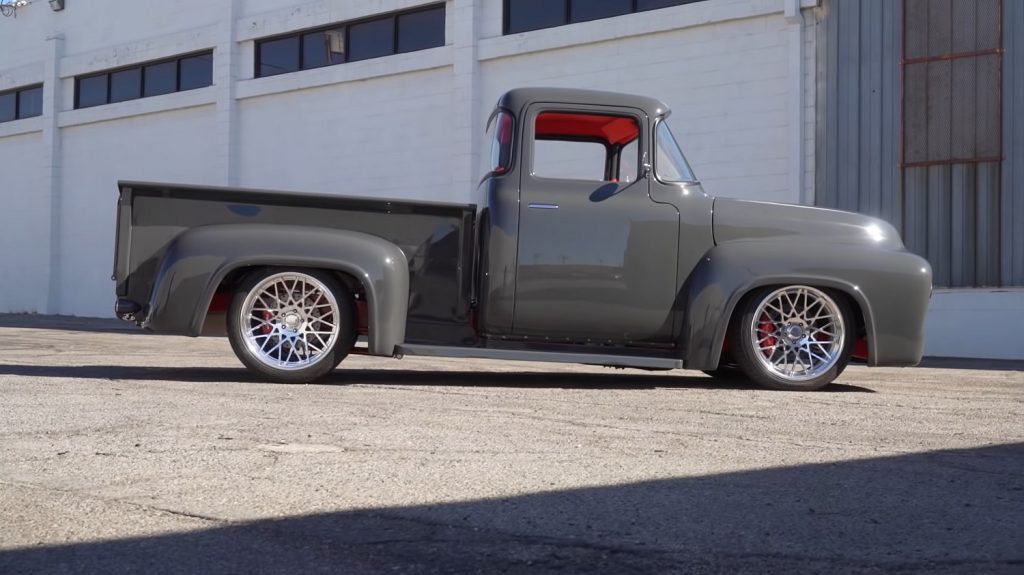 That starts under the hood, where the 1956 Ford F-100 makes do with a stock Gen 2 Ford 5.0L Coyote V8, which produces 430 horsepower and 400 pound-feet of torque. It’s connected to FoMoCo’s 6R80 automatic transmission, which sends power back to a Ford 9-inch rear end. 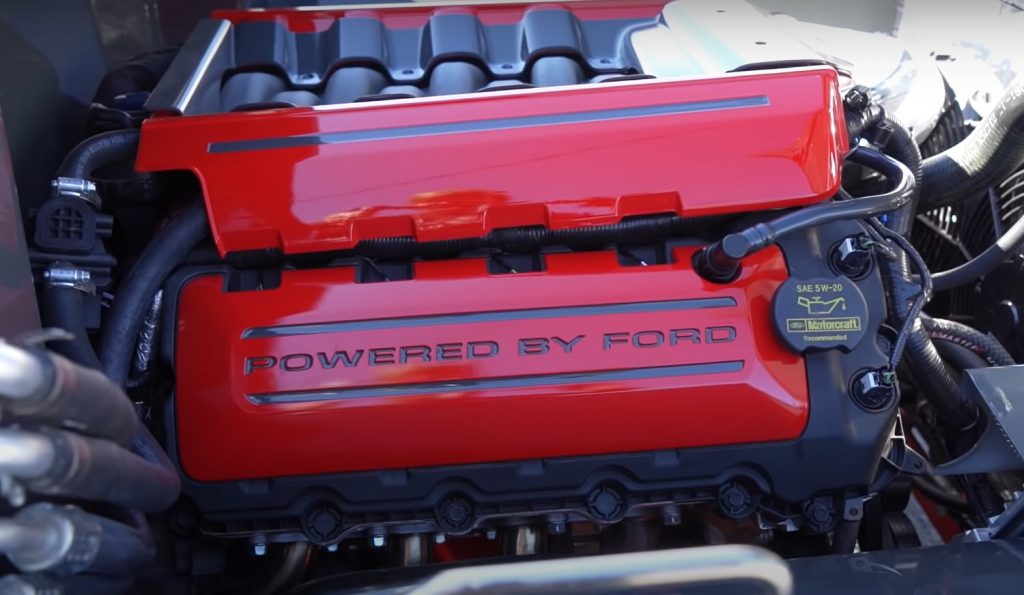 The chassis itself is a completely custom TCI-supplied unit as well, with a four-link setup out back. The classic pickup rolls on American Racing wheels that measure in at 20×9 inches up front and 20×12 in the rear, the latter of which are fitted with some beefy 335 tires. The chassis is even painted red to match the gray truck’s custom interior, which is a nice touch. 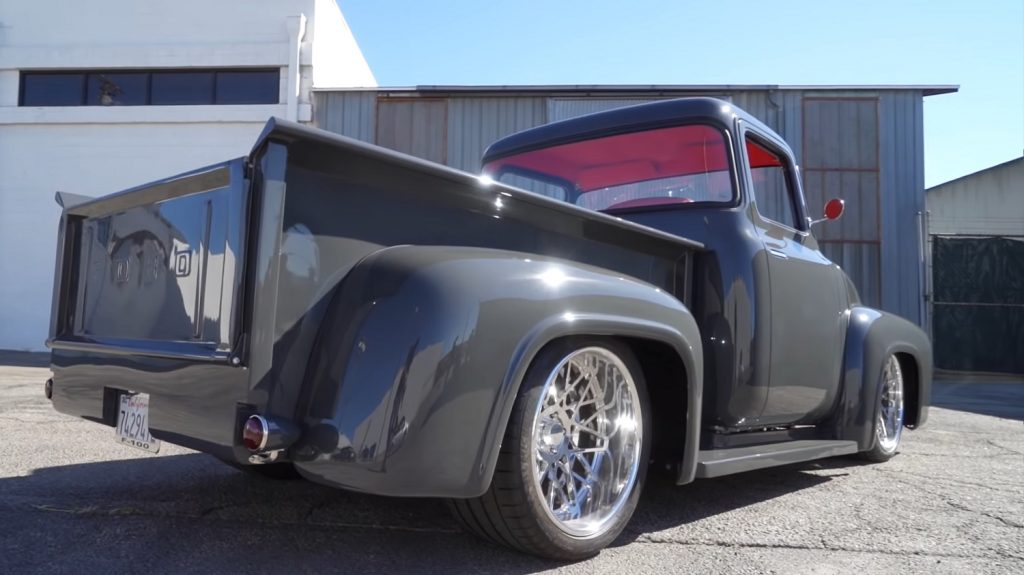 The owner did leave quite a bit of chrome trim in and around the truck, which provides a nice bit of contrast to the sea of gray and red. Regardless, he still removed the bumpers and went for a flush look, then shaved pretty much all the trim, rain gutters, windshield wipers, and everything else from the exterior. Because who’s gonna drive this beauty in the rain, anyway? 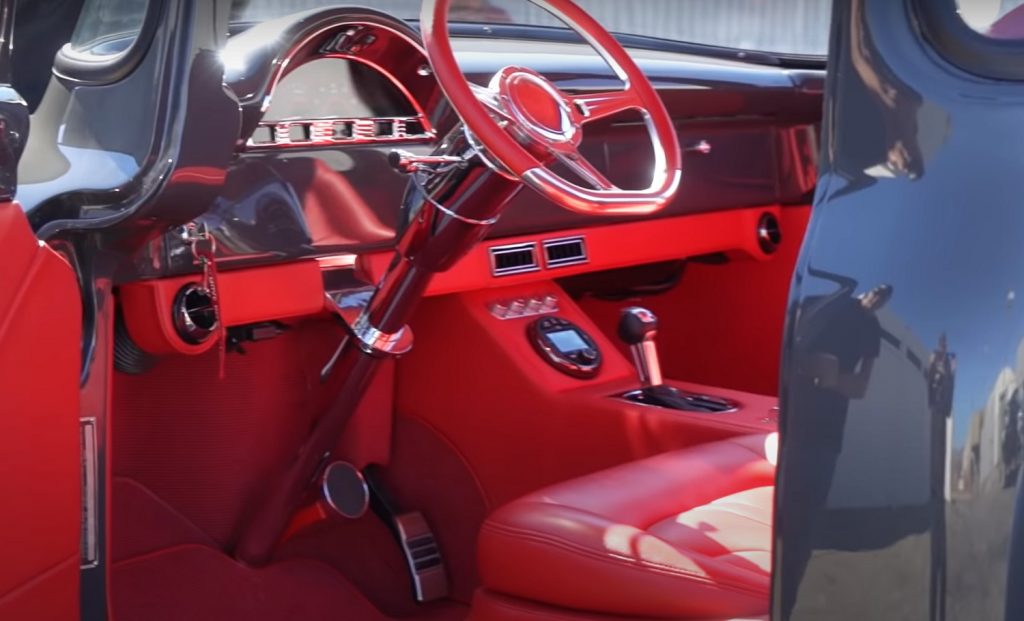 Much of the interior is custom, save for a set of leather seats lifted from a Lexus, though they’ve been reshaped as well. Other welcome amenities include a Vintage Air A/C setup, digital gauges, Bluetooth radio, and even some cushy German weave carpeting done up like a Porsche.

Put it all together, and this 1956 Ford F-100 is one of the cleanest customs we’ve seen in some time. And with a masterful combination of a modern chassis and drivetrain together with one of the best-looking bodies to ever emerge from Ford’s design studios, that’s a combo that’s tough to beat.