Back in October of last year, Ford Authority reported that the Ford Explorer would be gaining King Ranch and Timberline trim levels for the 2021 model year. Since then, we’ve spied Explorer Timberline prototypes out testing not just once, or twice, but three times, and have also spotted the King Ranch on one occasion thus far. But aside from its unique styling features, we noticed something particularly interesting about the Timberline – a new logo – designed to look like the outline of a mountain range – that is present on the front bumper.

While the King Ranch trim level has been around for a while on Ford F-Series pickups including the Ford F-150 and Ford Super Duty, Timberline is a brand new brand for the automaker. It will signify a more off-road capable version of the Ford Explorer, as we’ve previously reported, and the Timberline brand is very similar to Subaru’s Wilderness Edition Outback, Forester, and Crosstrek that are in the works.

These light-duty off-road vehicles, which also include the Ford Bronco Sport and future Ford Fusion Active, are designed to appeal to outdoorsy people and feature a host of enhancements that make them capable to perform mild to medium off-roading activities, while carrying their owners and their gear to remote destinations to do things like fish, camp, bike, kayak, or canoe.

Much like Ford’s European Active models, which have greatly expanded due to growing demand in recent years, Timberline will target the same sort of customer. That’s precisely why the Explorer Timberline prototype is wearing a new logo that looks like a mountain range, as it’s easily identifiable as a vehicle that’s capable of doing far more than just hauling groceries and the kids to soccer practice.

In addition to the new logo, the Explorer Timberline features a unique grille design with a single bar that runs the entire width of the grille, an orange line across the front bumper, matching orange tow hooks, and a new fog light design. It rolls on a set of black 18-inch wheels wrapped in Bridgestone Dueler all-terrain tires, with a dual exhaust tucked up underneath the rear to improve ground clearance. It’s also possible that the Timberline rides on an adjustable air suspension, as we recently speculated. 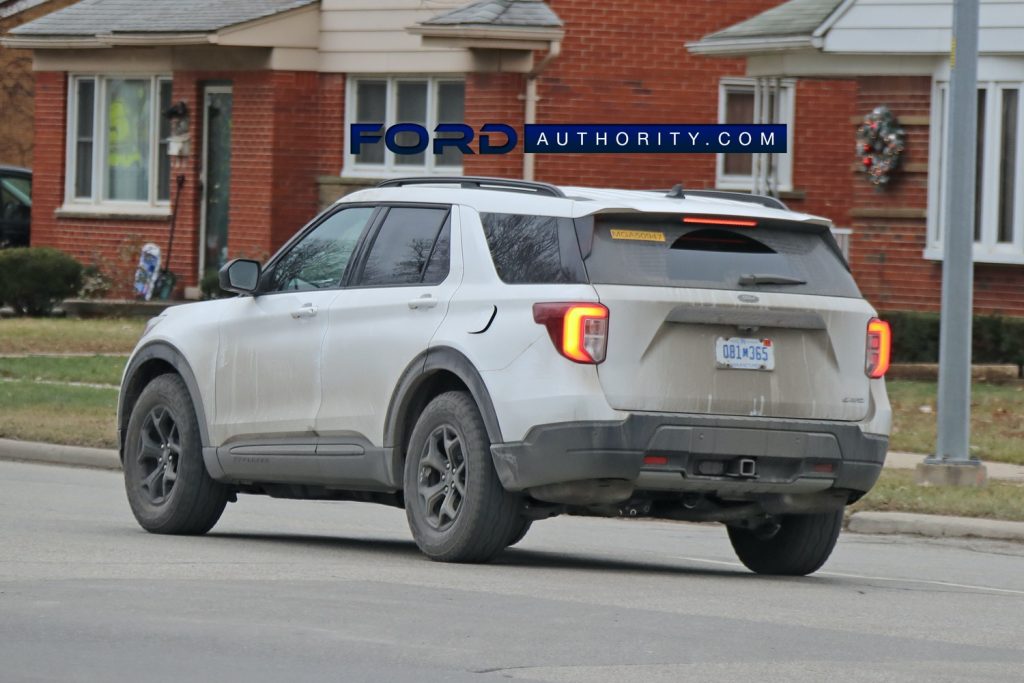