The Governors Highway Safety Association (GHSA), in partnership with Ford Motor Company Fund, has released a new report that examines the significant role speeding plays in teen drivers and fatalities and offers practical tools to help parents rein in this lethal driving habit. 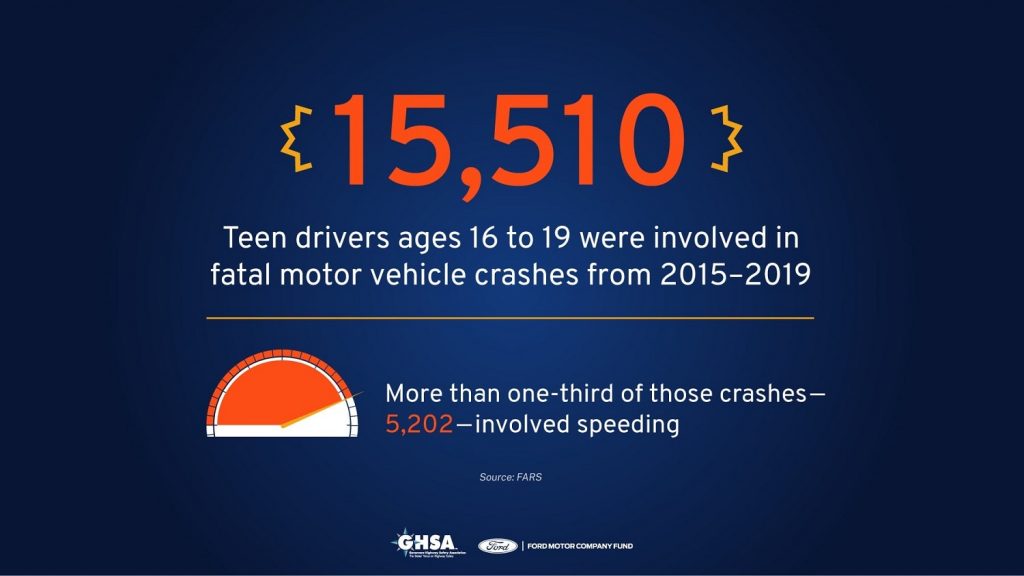 The report, Teens and Speeding: Breaking the Deadly Cycle, is the first look in recent years at the role speeding plays in teen driver deaths and incorporates recently released data that includes state-by-state statistics. It sheds new light on what we know about speeding-related fatal crashes involving teens – the driver is more likely to be male, have run off the road or rolled the vehicle, and be unbuckled. The data analysis was conducted by Richard Retting of Sam Schwartz Consulting. 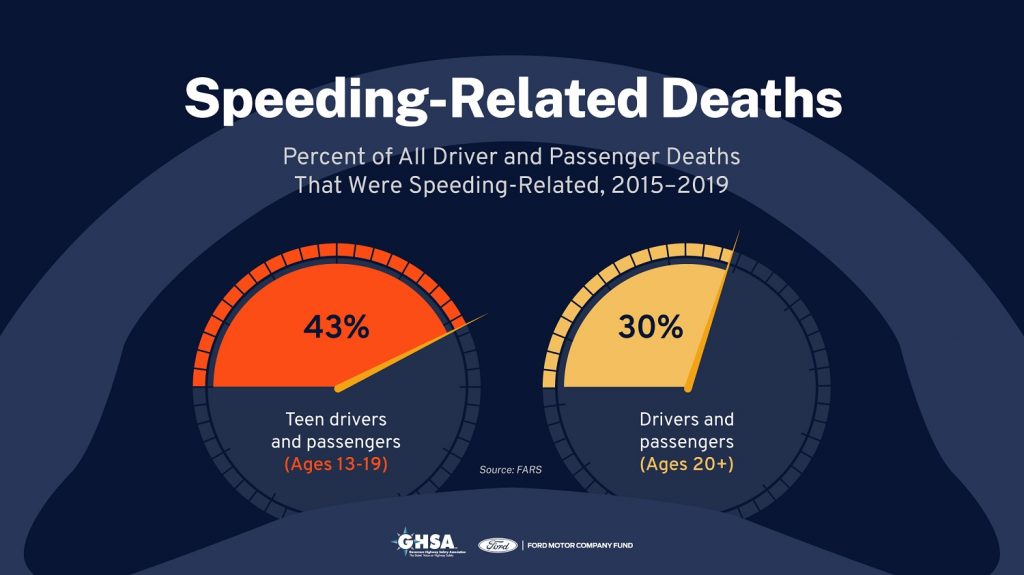 While the report includes data through 2019, the new analysis of teen driving deaths is timely as overall traffic crashes have spiked during the COVID-19 pandemic, and speeding on less-crowded than normal roadways is cited by states as a major factor in the surge in motor vehicle deaths. Parents may also have less time to spend training their teen drivers given other priorities during the pandemic.

The GHSA report also notes the risk of a teen driver being involved in a speeding-related fatal crash rises exponentially with each additional passenger in the vehicle. These dangerous conditions were unfortunately demonstrated earlier this month when seven Michigan teens between the ages of 17 and 19 were hospitalized when the teen driver left the roadway and rolled the vehicle. Speed was a factor and the crash happened late at night. 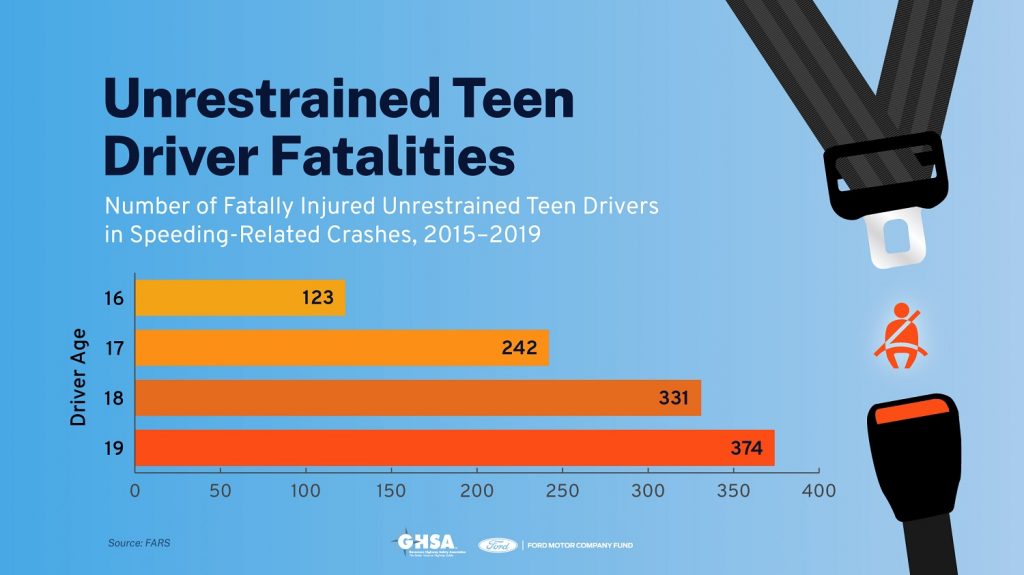 “Our country has a speeding problem that has only worsened during the COVID-19 pandemic,” said GHSA Executive Director Jonathan Adkins. “Thousands of people die needlessly on our roads because some drivers mistakenly think less traffic means they can speed and nothing bad will happen. The data tell us that teen drivers are the most likely to be tempted to speed, so the need to address this issue is more critical than ever given traffic death trends during the pandemic.”

The GHSA report identifies real-world, practical tools along with technology that parents can leverage to help rein in speeding teens, as well as re-evaluate their own driving behaviors. The latter is critical since speeding is typically passed down from parent to child. Surprisingly, one technology solution is a teen’s cell phone, which parents can use to track speeding, hard braking, and other actions via apps. 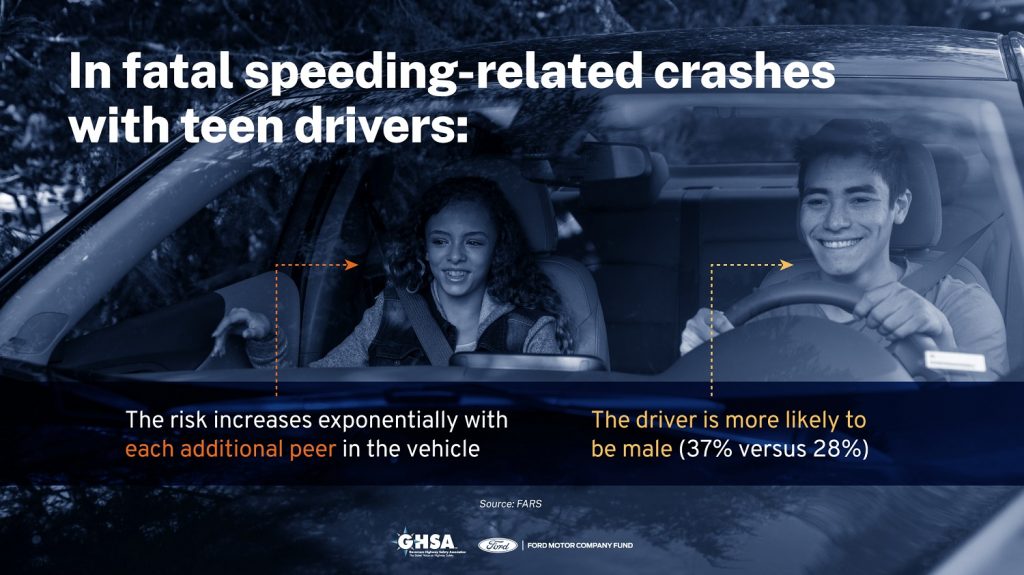 For nearly 20 years, GHSA and Ford Motor Company Fund have worked together to address teen driver safety through the award-winning Ford Driving Skills for Life program. A signature program of the Ford Fund, Ford Driving Skills for Life has invested more than $60 million to provide free, advanced driver education to more than 1.25 million newly licensed drivers in all 50 U.S. states and 46 countries worldwide since 2003.

“Speed management continues to be a key component of our training and this report reaffirms its importance,” said Jim Graham, Ford Motor Company Fund Manager. “Teens don’t see speeding as a serious problem and parents likely don’t recognize how rampant it is for novice drivers, so teaching them about the impact is critical.”

We’ll have more on Ford’s efforts to improve road safety soon, so be sure and subscribe to Ford Authority for 24/7 Ford news coverage.