Operations at Ford Brazil are being heavily restructured this year, with the closing of three plants either underway or scheduled to be complete by the end of 2021. The FoMoCo vehicle assembly site in the city of Camaçari, Bahia is one of the affected facilities, and Ford Authority has recently discovered footage of Ka and EcoSport body shells from the plant lined up along a road and being scrapped.

In one of the videos, a white Ford Ka shell is first lifted and then pummeled repeatedly by the boom arm, essentially acting like a robotic clenched fist. The footage ends just short of the car being flattened, but its sheet metal certainly doesn’t last long against such overwhelming and concentrated mechanical force. The third-generation Ka was originally developed by Ford Brazil, as was the EcoSport, and both were made at the Camaçari plant until production was halted in January of this year. 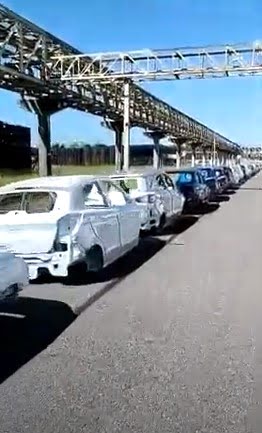 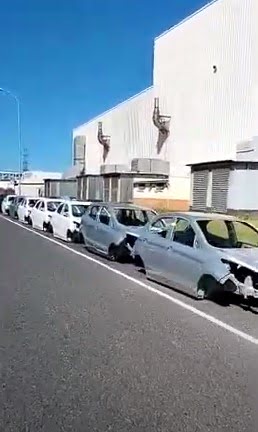 Despite the Ka and EcoSport being The Blue Oval’s best-selling models in Brazil by a wide margin, the overall sales trend was declining leading up to the decision to close the site. For instance, Ford Brazil sales fell 36 percent to only 139,255 units during the 2020 calendar year.

FoMoCo’s Taubaté Engine Plant, which supplied the 1.5L Duratec three-cylinder and 1.6L Sigma four-cylinder engines for the Ka and EcoSport has also been shut down. Once existing inventories are sold through, the locally produced models will completely disappear from Ford Brazil’s lineup.

Ford will also shutter the Horizonte plant in Ceará that produces the Troller off-roader.

Going forward, Ford Brazil will focus on selling imported models such as the Ranger midsize pickup truck (built in Argentina), Mustang muscle car (built in the U.S.), Bronco Sport off-roader (built in Mexico), as well as the Transit (imported from Uruguay). Ford Motor Company President and CEO, Jim Farley, has attributed the company’s moves to a necessary streamlining of operations, and to ensure the success of future business in Brazil.

Faced with such drastic changes, over 160 Ford dealers have reportedly made the choice to close or switch manufacturers.

We’ll continue to monitor and report on Ford’s global activities, so be sure and subscribe to Ford Authority for the latest Ford business news, as well as 24/7 Ford news coverage.