Exactly one year ago today, Ford Authority wrote about how The Blue Oval fared in the 2020 J.D. Power Automotive Brand Loyalty Study, where it beat out most of its rivals to place fifth overall. Now, we can report on the 2021 version of that same study, and it turns out that the company hasn’t lost much luster in the eyes of the buying public, when compared to other mass-market brands.

Automakers would be in much tougher positions if the majority of their past buyers opted to follow up their previous purchases with a competitor’s vehicle. Fortunately, that really wasn’t an issue for them, as most of the top scoring brands held onto the same exact positions they earned in 2020. The pandemic may have played a role in helping customers stay put, as outlined by Tyson Jominy, vice president of data & analytics at J.D. Power:

“The time period for this study traversed nationwide lockdowns, a recovery from the worst of the pandemic and the effect chip shortages had on vehicle inventory. During the height of the lockdown, shoppers who were unable-or unwilling-to visit showrooms in-person weren’t shopping around as much but could still call a dealer and have a vehicle delivered to their homes. The bottom line is finding a vehicle required working closely with a dealer and, when presented with obstacles, shoppers turned to the dealer they already knew. As a result, the level of increased loyalty this year is remarkable.” 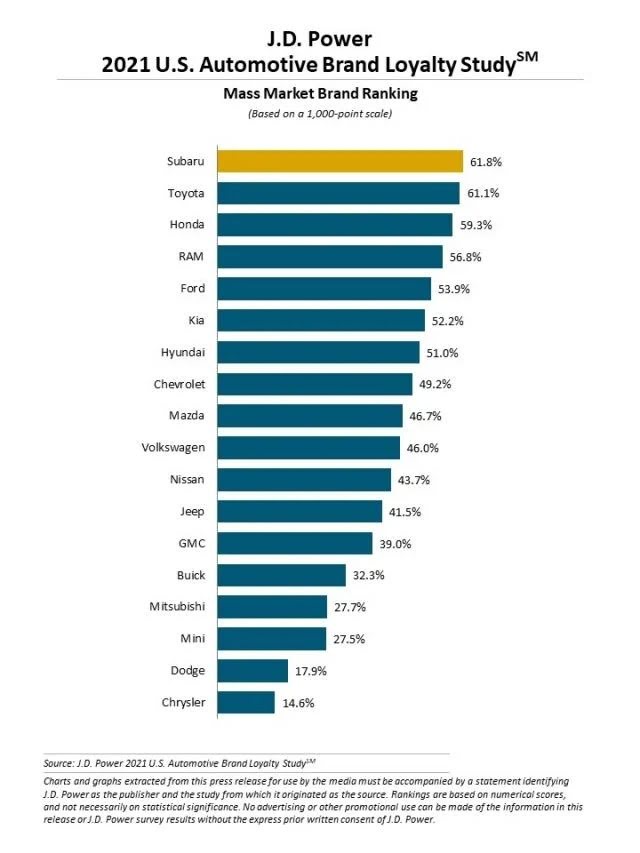 The J.D. Power Automotive Brand Loyalty Study, which is now in its third year of operation, is based on data compiled from new car sales, and is focused on the buyers who stuck with the same brand when trading in or purchasing their latest vehicle. Loyalty rankings stem from the percentage of owners who opted to remain with the same manufacturer. As previously mentioned, Ford placed fifth among mass-market brands, the same as last year, although a slightly smaller percentage of Ford owners replaced their prior vehicle with another Ford product this time around, as 54.3 percent of new cars shoppers stayed loyal to The Blue Oval in 2020. Among the top five finishers, only Ford and Ram lost a bit of ground, although their respective losses amount to less than one percent each.

It will be interesting to see if automotive brand royalty remains just as solid in 2022, and if Ford can gain any ground in next year’s study. Ford Authority has previously covered the seductive powers of the 2021 Ford Mustang Mach-E and 2021 Ford Bronco Sport, two vehicles that have been luring shoppers away from their prior brands since they hit dealerships late last year. Combined with the arrival of the 2022 Ford Maverick, the company will be in a good position to tempt new and repeat buyers to drive away in a Ford-branded vehicle.