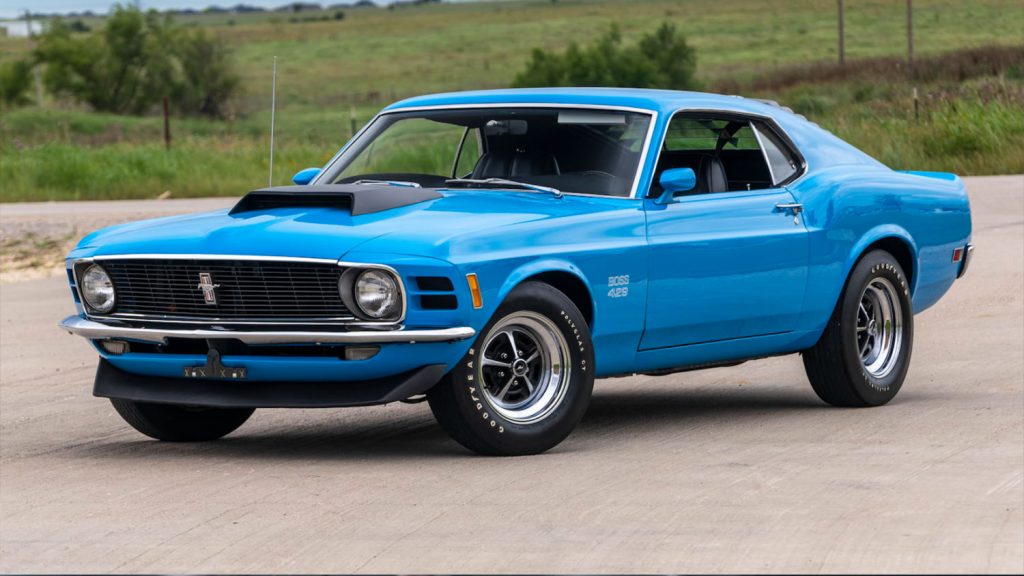 The Ford Mustang Boss 429 was built to homologate the 429 cubic-inch semi-hemispherical engine for racing in NASCAR. At the time, Ford was in need of an engine that could run with MOPAR’s 426 Hemi in Grand National racing. In order to meet homologation standards, 500 units of 429-equipped cars would have to be built and sold to the public. A total of 1,359 examples were built between the 1969 and 1970 model years. 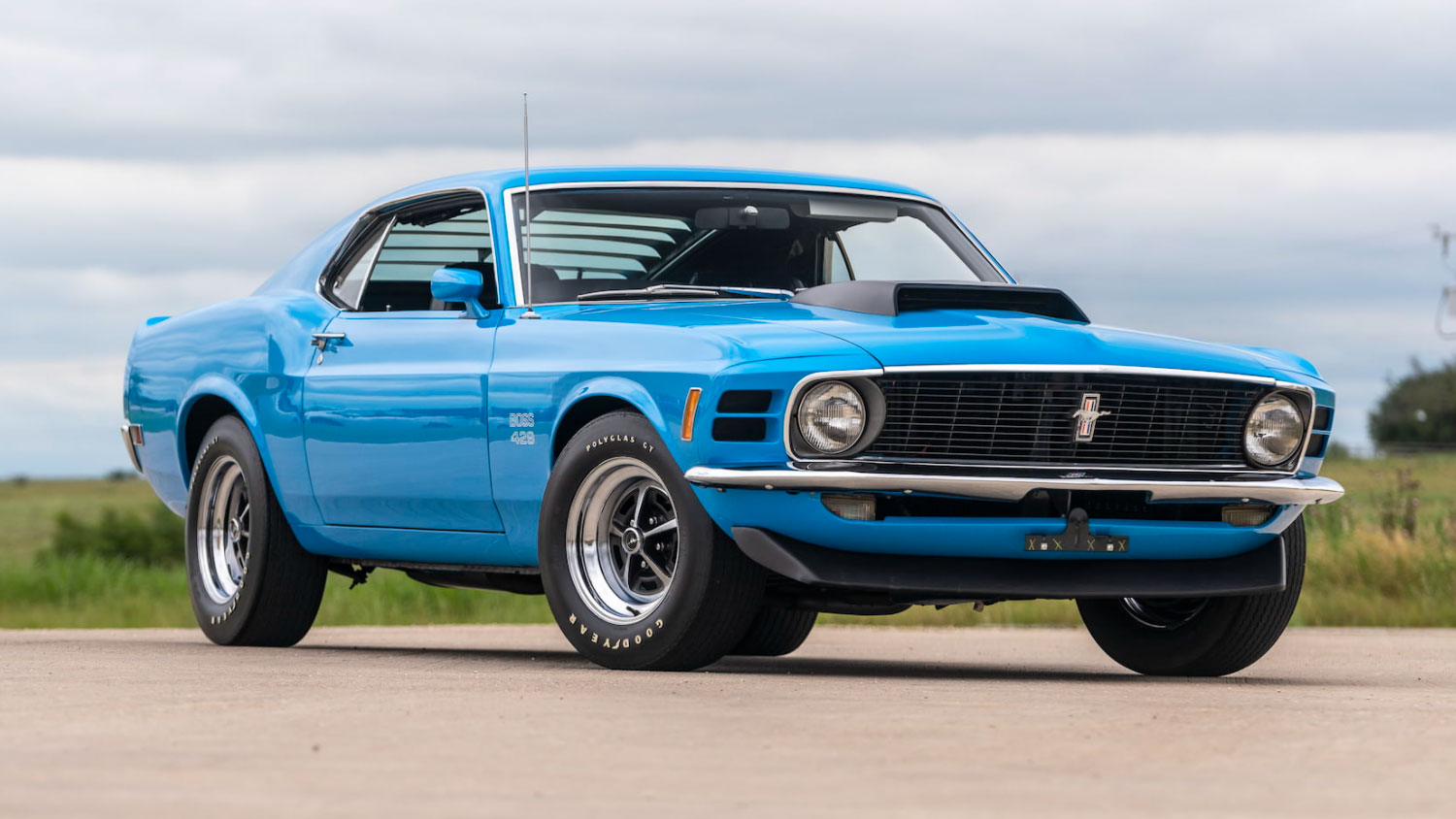 The Mustang Boss 429 was not powered by a run of the mill V8. It had four-bolt mains, forged steel crank and rods, aluminum heads with the semi-hemi combustion chamber, separate cooling for the block and heads, a 735-CFM Holley four-barrel carb, and an aluminum intake. The 429 was so wide, in fact, that it didn’t fit in the Mustang’s engine bay. So Ford enlisted Kar Kraft of Dearborn, Michigan, for final assembly.

Ford and Kar Kraft had previously worked together on developing the GT40 MkII and GT40 Mk IV. Cobra Jet Mustangs received factory-revised front aprons and fenders, with Kar Kraft altering the engine compartment to fit the 429. Batteries were moved to the trunk to help offset the weight of the big motor, and a 3/4 inch rear sway bar was added. 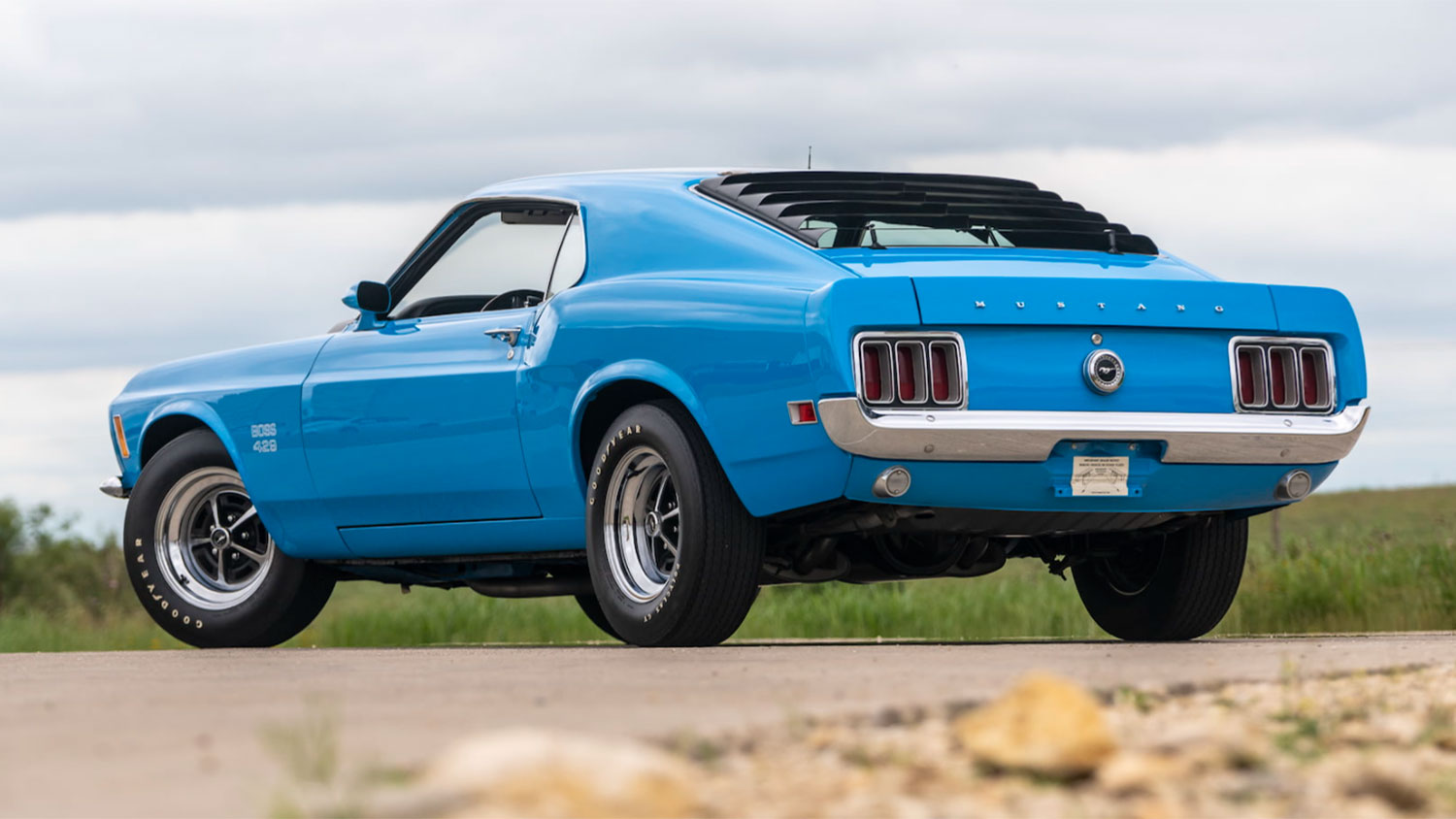 Our subject car today, KK no. 2401, was featured in the September, 1996 issue of Mustang Monthly. It has covered a scant 7,745 miles from new. The 429 is backed by a four-speed manual transmission. It was restored by Randal’s Restorations, with finish detailing by marque specialist Bob Perkins. It is finished in Grabber Blue with a black vinyl interior. 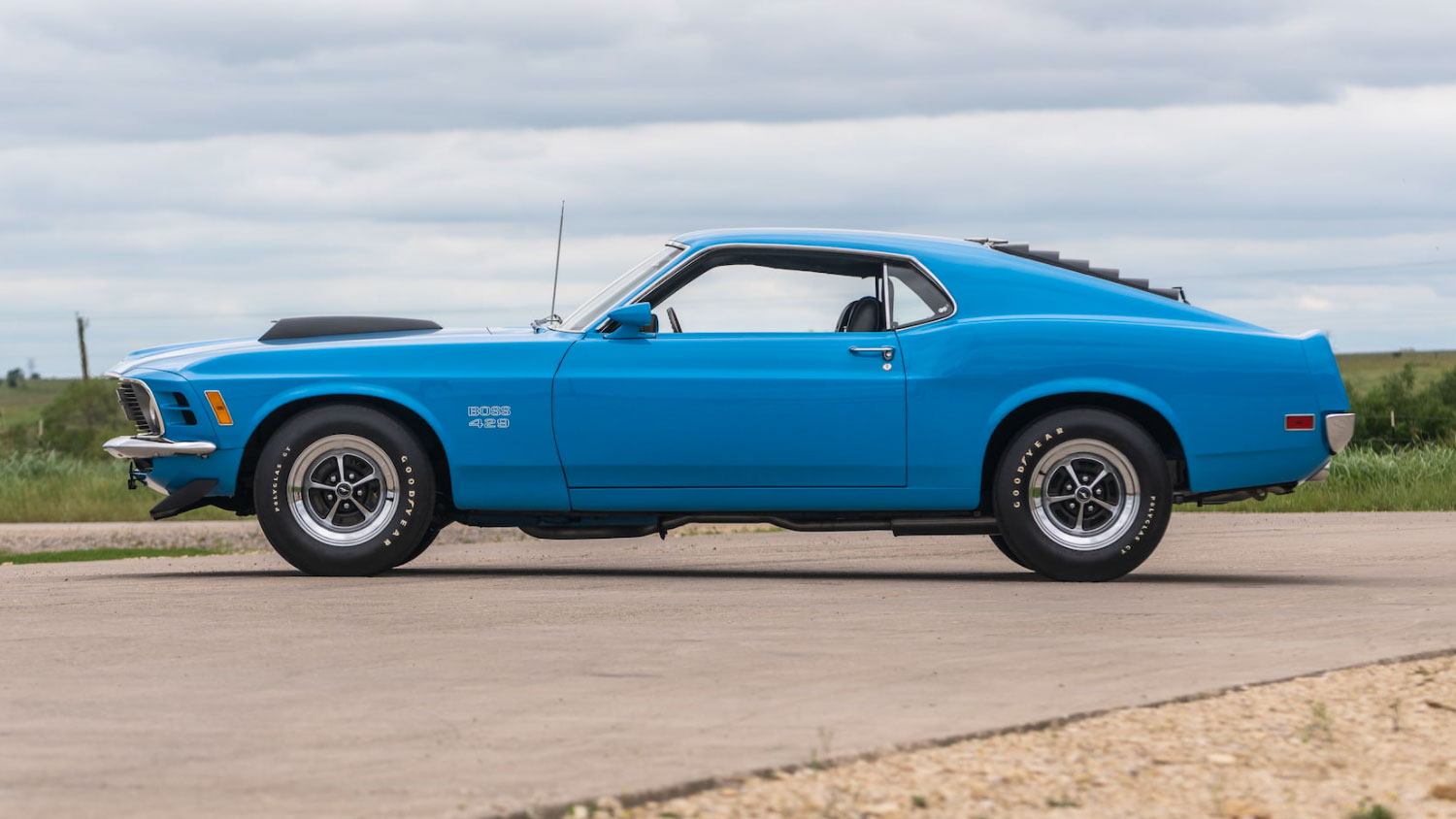 The Grabber Blue finish of this Mustang Boss 429 presents well, with a deep gloss that almost appears wet. The chrome bumpers, as well as the Magnum 500 wheels, gleam with a mirror finish. The wheels are wrapped in raised white letter Goodyear Polyglas GT bias-ply tires. Stainless trim is well polished and brilliant. The rear window is shielded by matte black window louvers. The windshield appears to be crystal clear, with no wiper tracks noted. 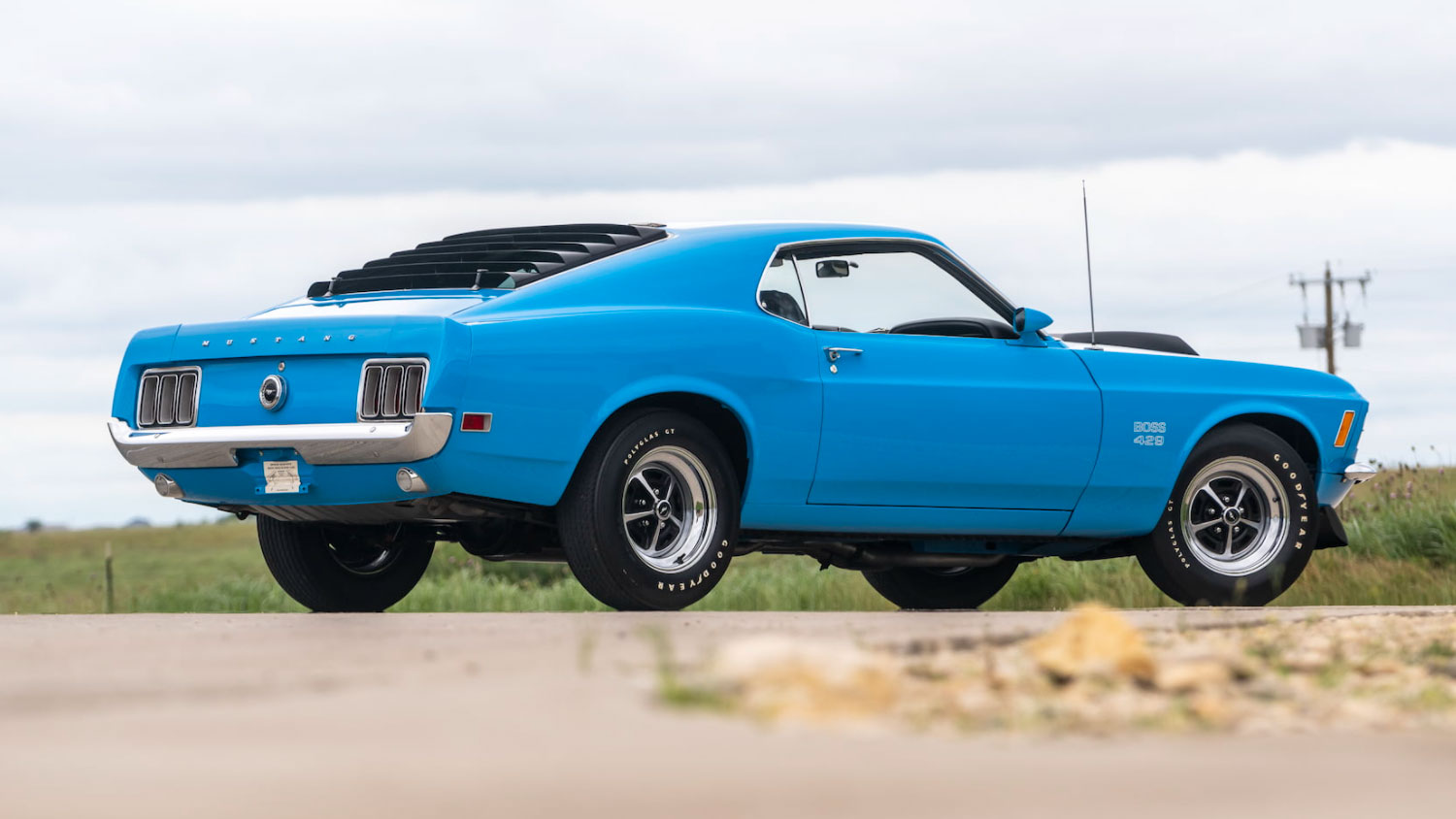 Inside, the Mustang Boss 429, the black “woven” vinyl seats show no appreciable wear. The black loop carpet is colorfast. The woodgrain console surrounds the T-handle topped chrome Hurst shifter. Armrests are in good nick, and the dash is free from any cracks. Aside from a bit of dust in the accordion shift boot, the interior looks showroom fresh. 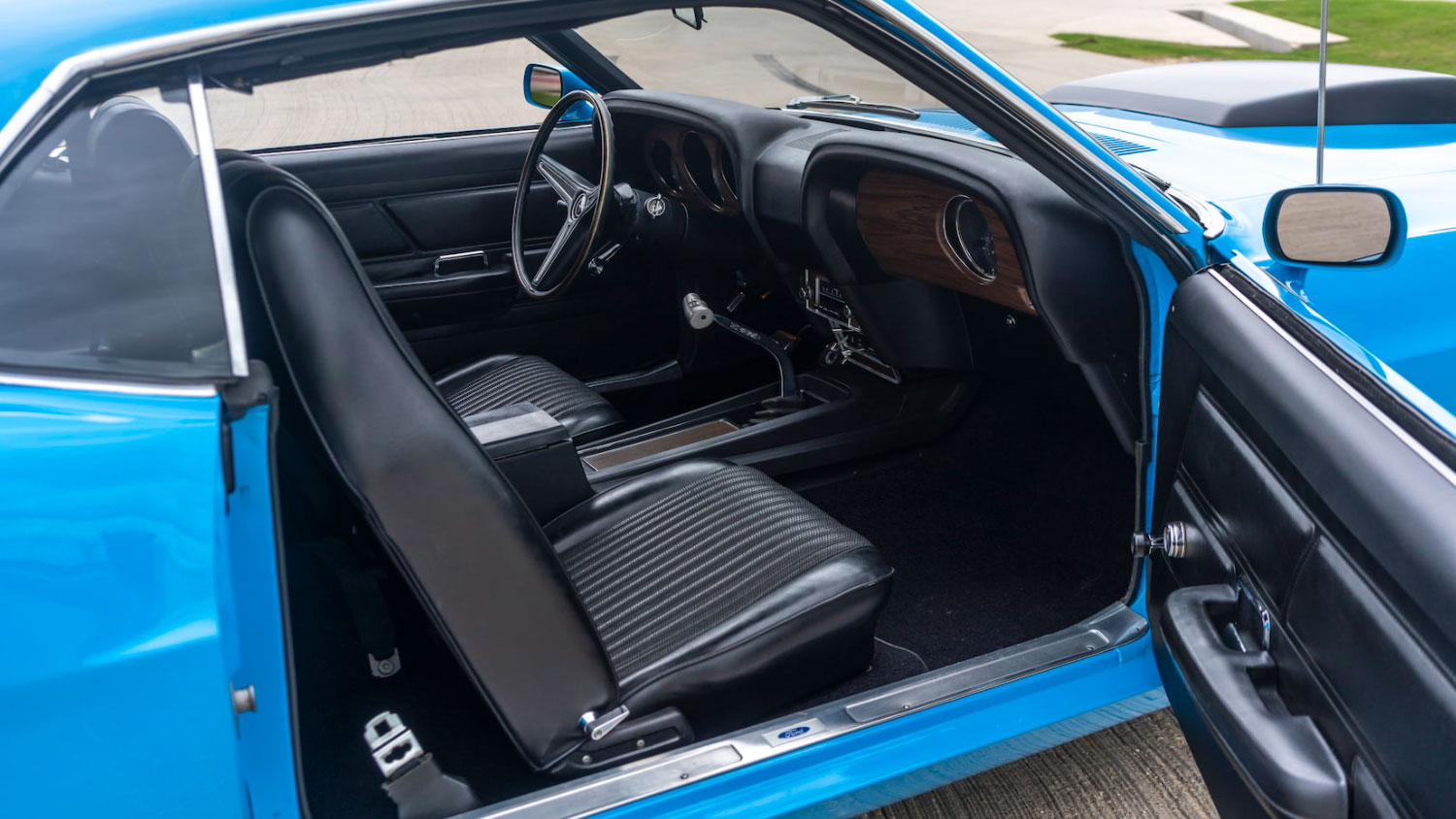 Under the hood of the Mustang Boss 429 is the legendary engine that gives the car its name. Wedged between the shock towers, the 429 appears clean, correct, and well detailed. Massive valve covers with “Boss 429” emblazoned across them remove any doubt this is a run-of-the-mill ‘Stang. Colors, markings, and decals present as if fresh from Kar Kraft. 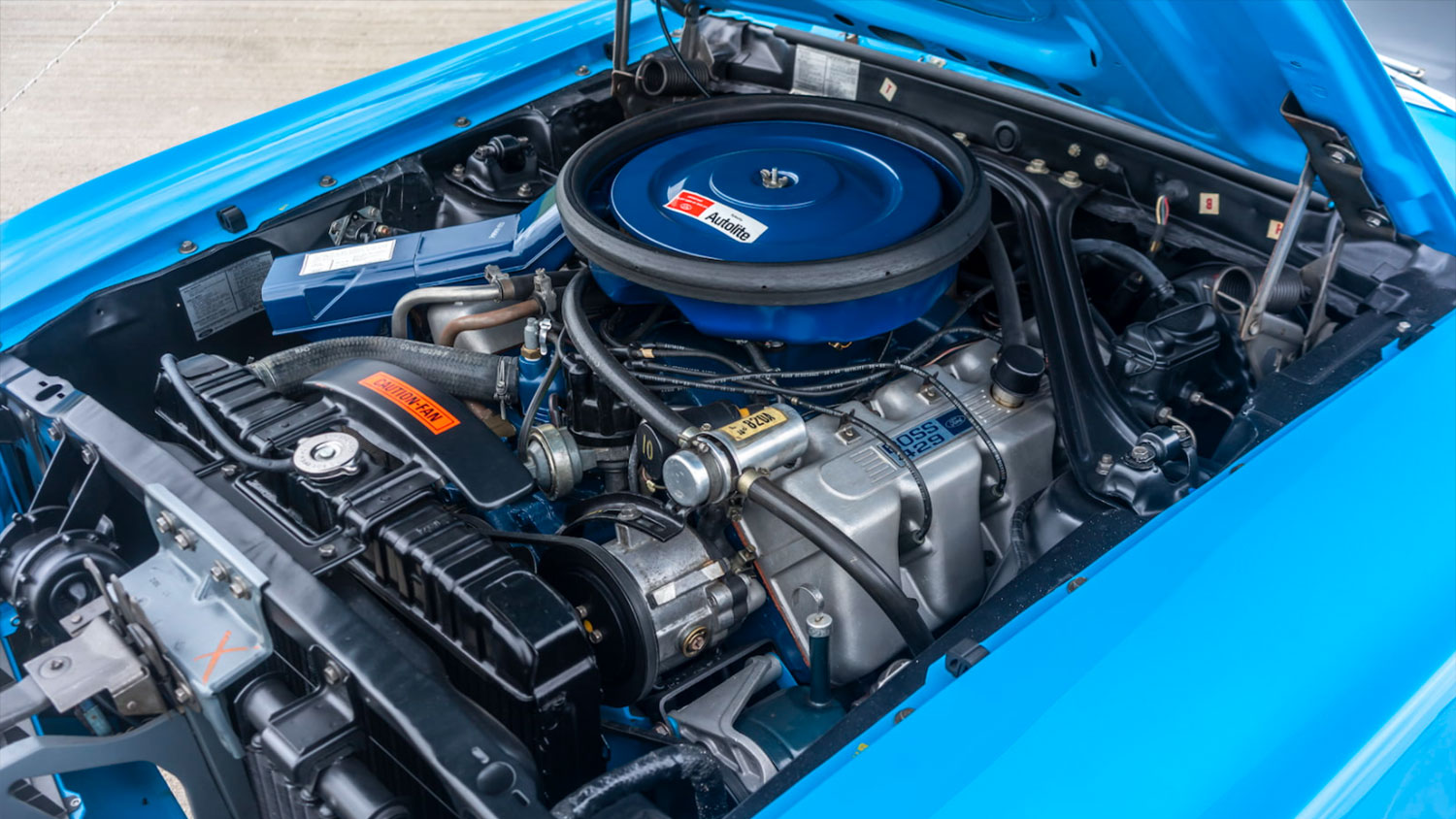 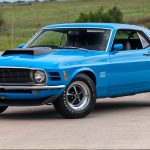 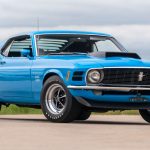 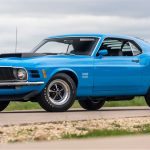 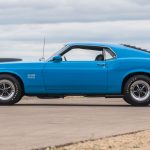 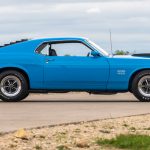 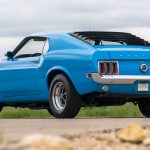 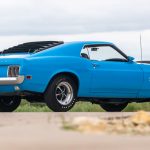 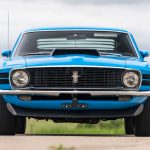 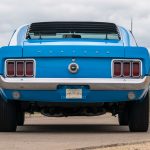 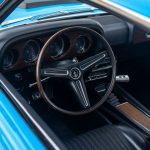 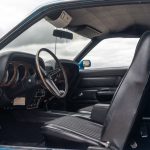 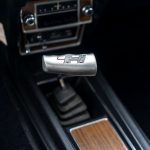 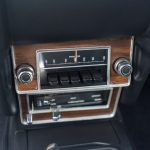 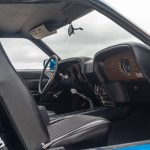 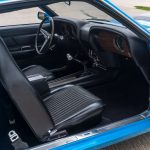 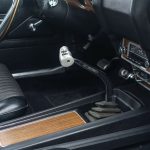 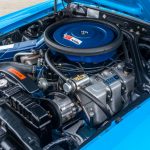 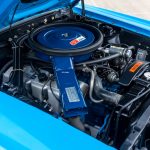 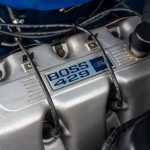