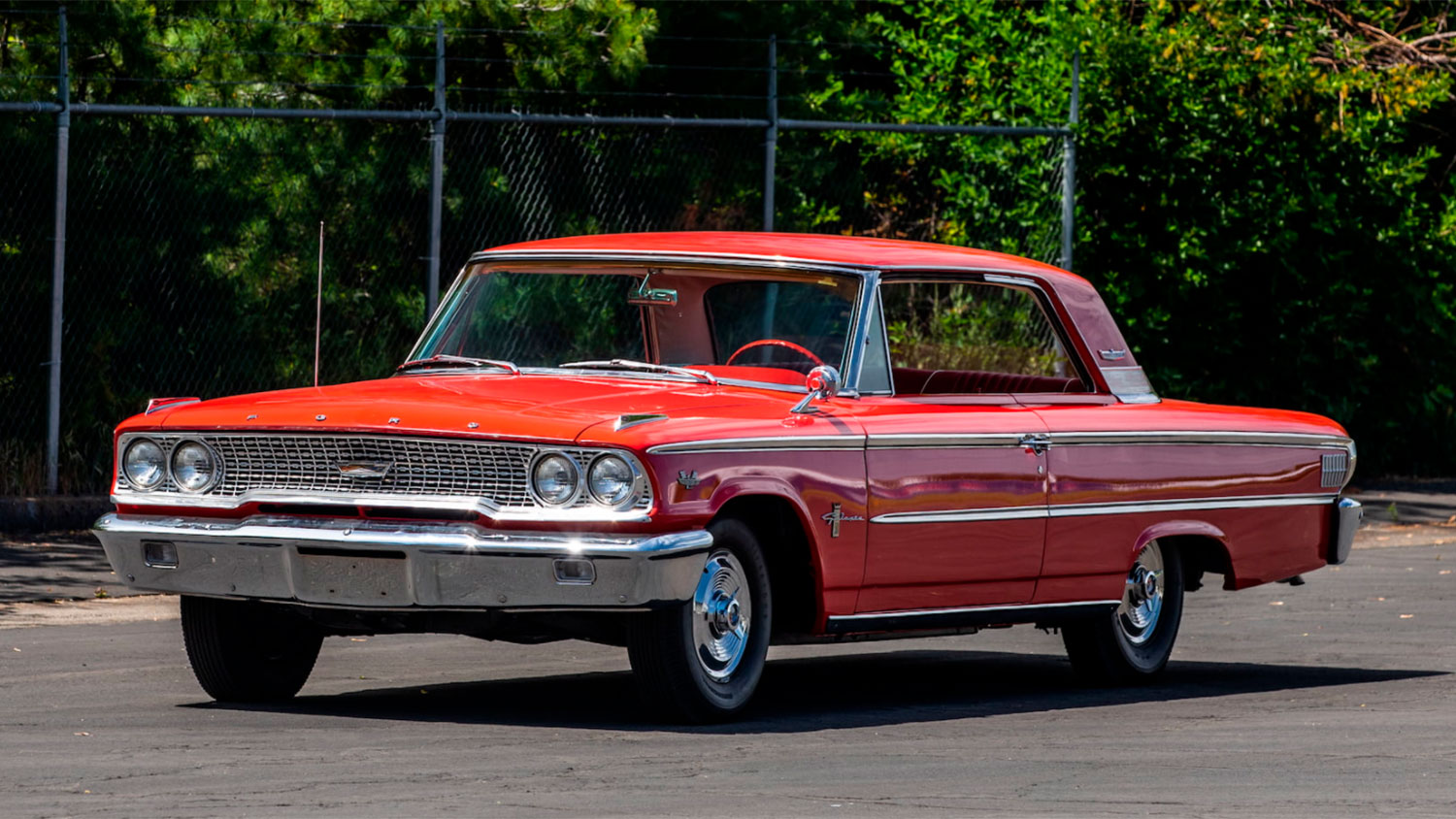 The 1963 Ford Galaxie was little changed from the 1962 model, save for very minor updates to the trim. Mid-year alterations included a lower fastback-style roofline to make the big Galaxie more competitive in NASCAR and NHRA Super Stock competition. The 1963½ Galaxie, meanwhile, was called the “sports hardtop”, and far outsold the boxier 1963 Galaxies. 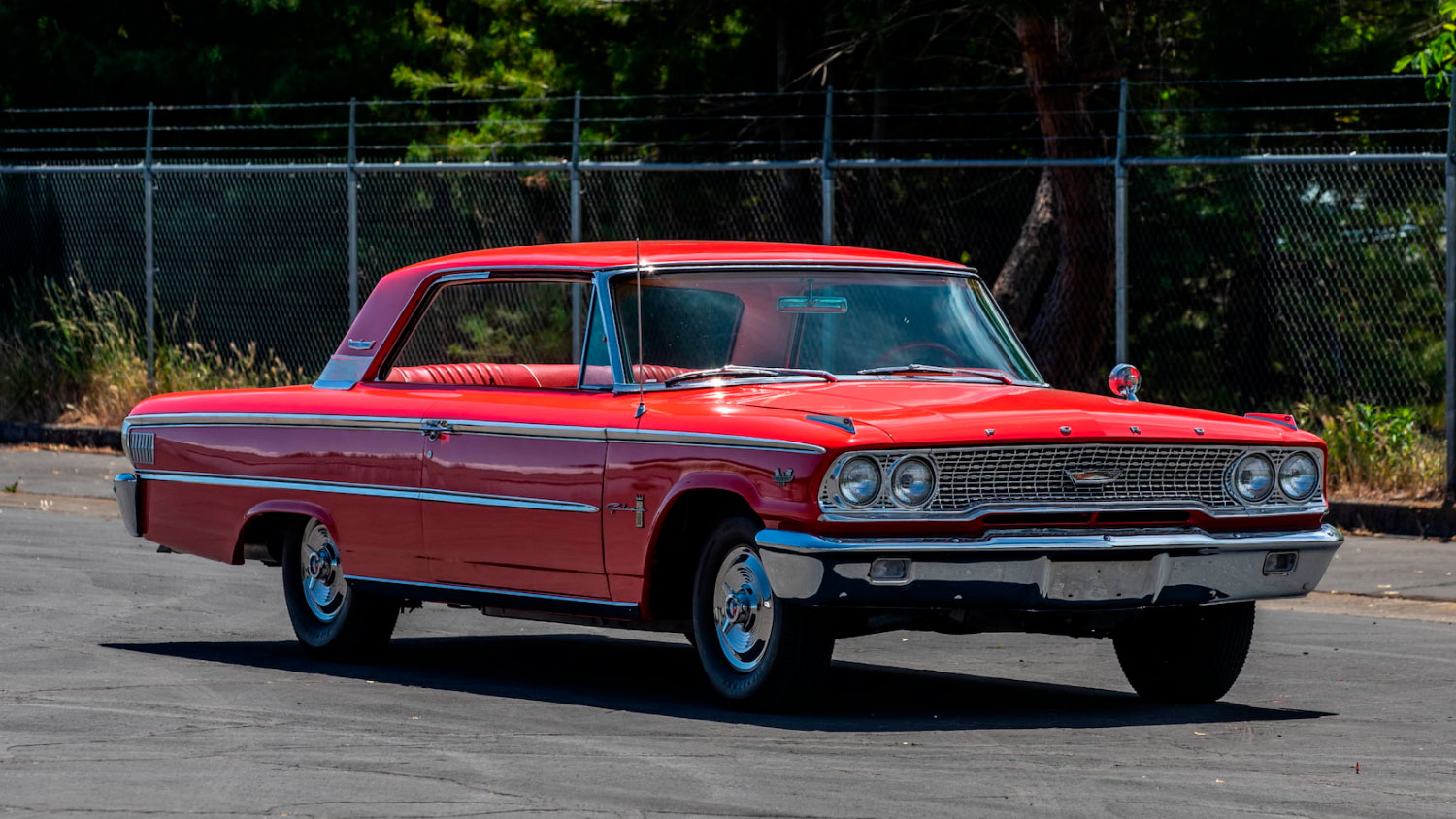 The 1963 Ford Galaxie could be had with a number of V8 engines, including the entry level 260 cube Small Block V8 (the 260 was replaced by the 289 in mid-1963) as well as the 352. A 390 cubic-inch V8 could be had in regular, high performance, or police versions. For racing and competition, there was the 406, which would be replaced by the mighty 427 midway through the production year. The dual Holley four-barrel equipped 427 was rated at 425 horsepower, but in race tune was said to be capable of a whopping 600 ponies. 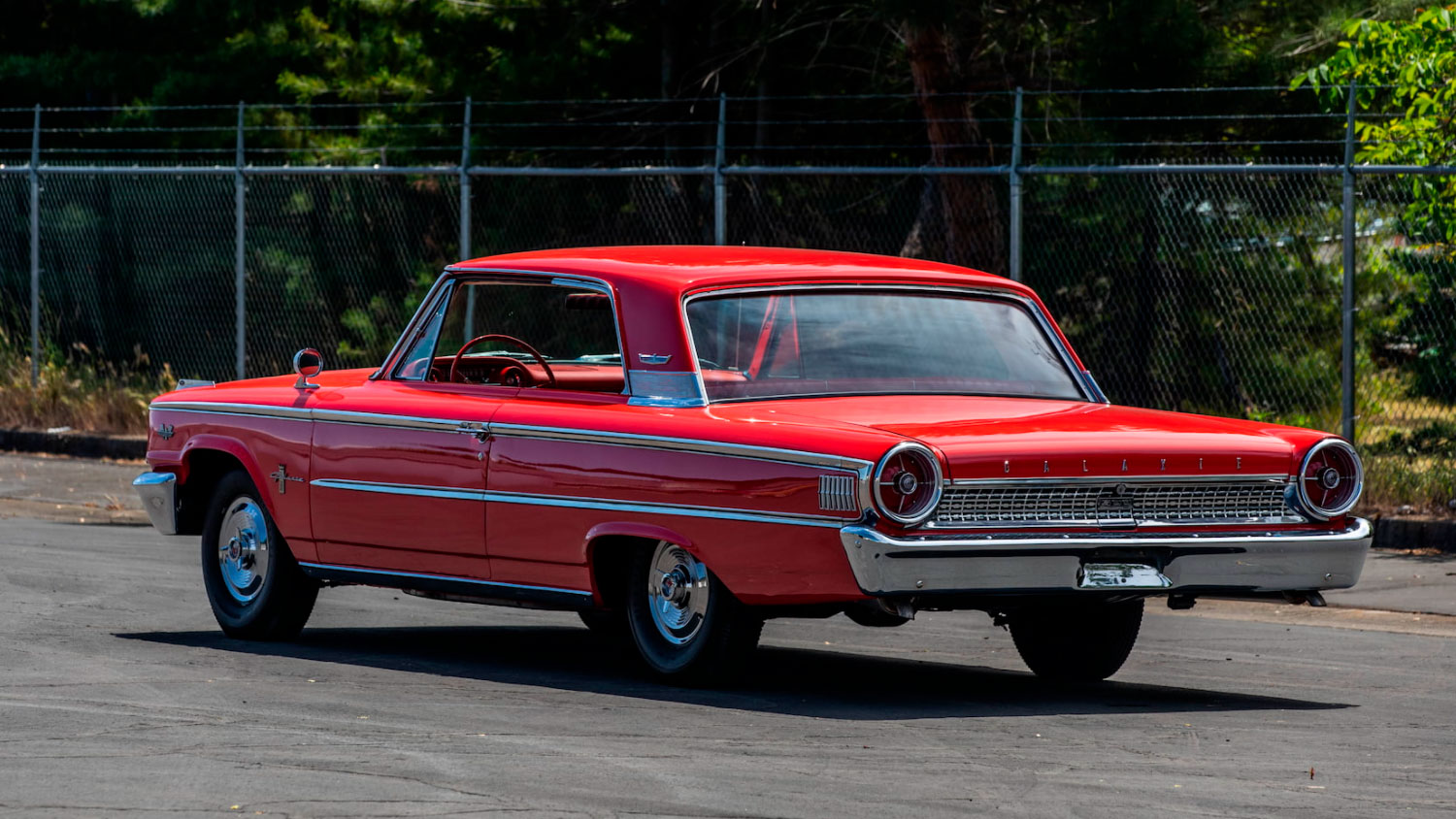 Our feature 1963 Ford Galaxie is a “square-roof” variant, likely produced early in model year production. It has been the subject of a frame-off restoration done to a high standard. It is powered by the B-Code 385 horsepower 406 cubic-inch V8, fed by a Holley four-barrel carb, which sits beneath a rare Holman and Moody air cleaner and atop an aluminum intake. Moving power to the wheels is a four-speed manual transmission. This Ford Galaxie’s glossy Rangoon Red paint presents well, and appears to have had decent prep and application. Panel gaps are reasonably consistent. Chrome bumpers show no pitting or patina, and the stainless trim looks to be well polished. Glass is clear, without nicks or wiper tracks. Steel wheels wear factory hubcaps and bias-ply blackwall tires. 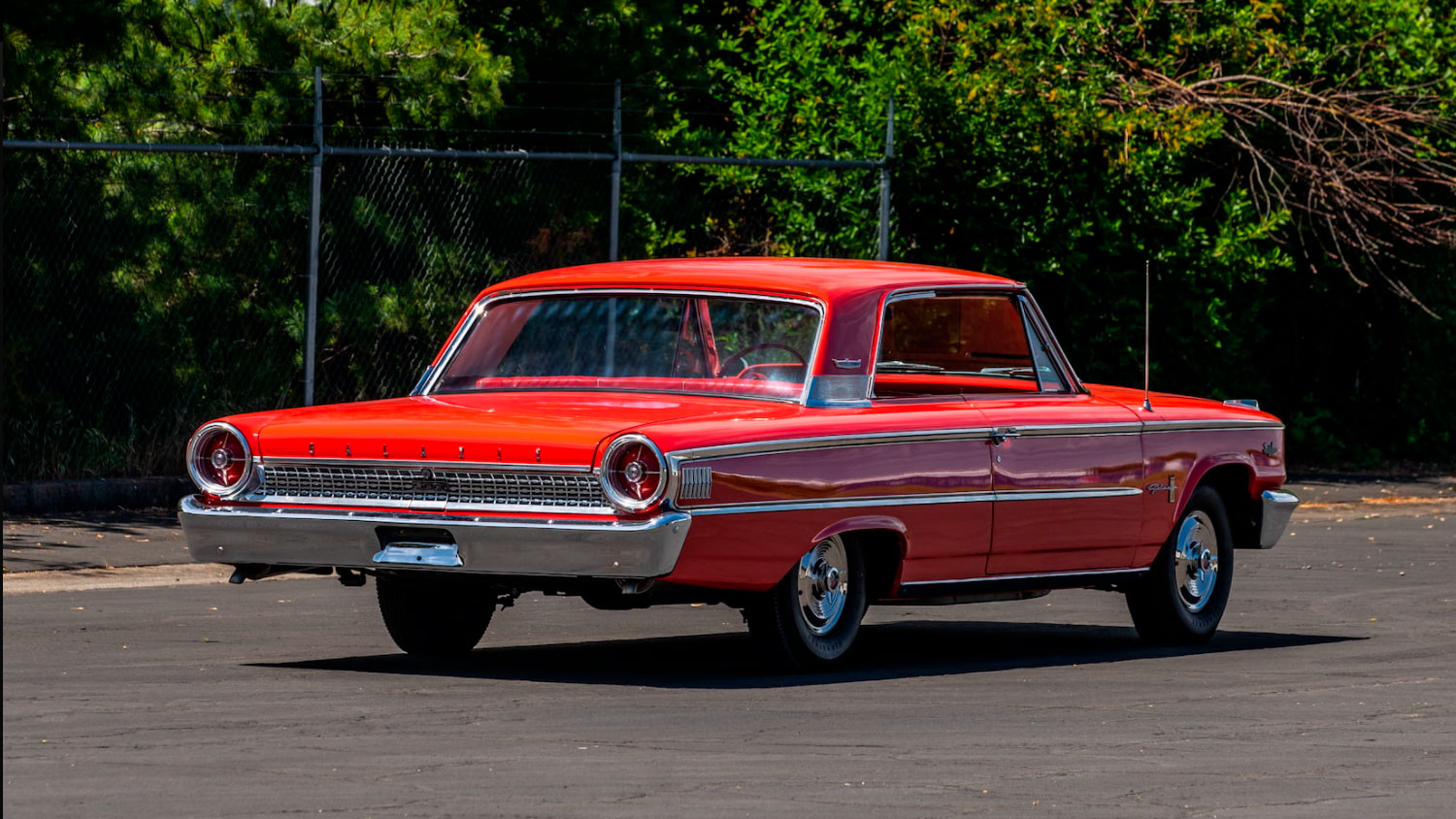 Inside the Ford Galaxie’s bright red interior, the carpets are clean and free from excessive wear. The red vinyl bench looks to have been recently recovered, with no wear noted at the outside seat bolsters. A factory pushbutton AM radio resides in the dash. The lower portion of the dash is adorned with clean stainless trim and shiny Rangoon Red paint. A floor-mounted, four-speed T-handle shifter is located just behind the AM radio. The steering wheel, presumably original to the car, shows a bit of age on the horn button. The cabin also shows that this Galaxie is equipped with a heater and defroster. 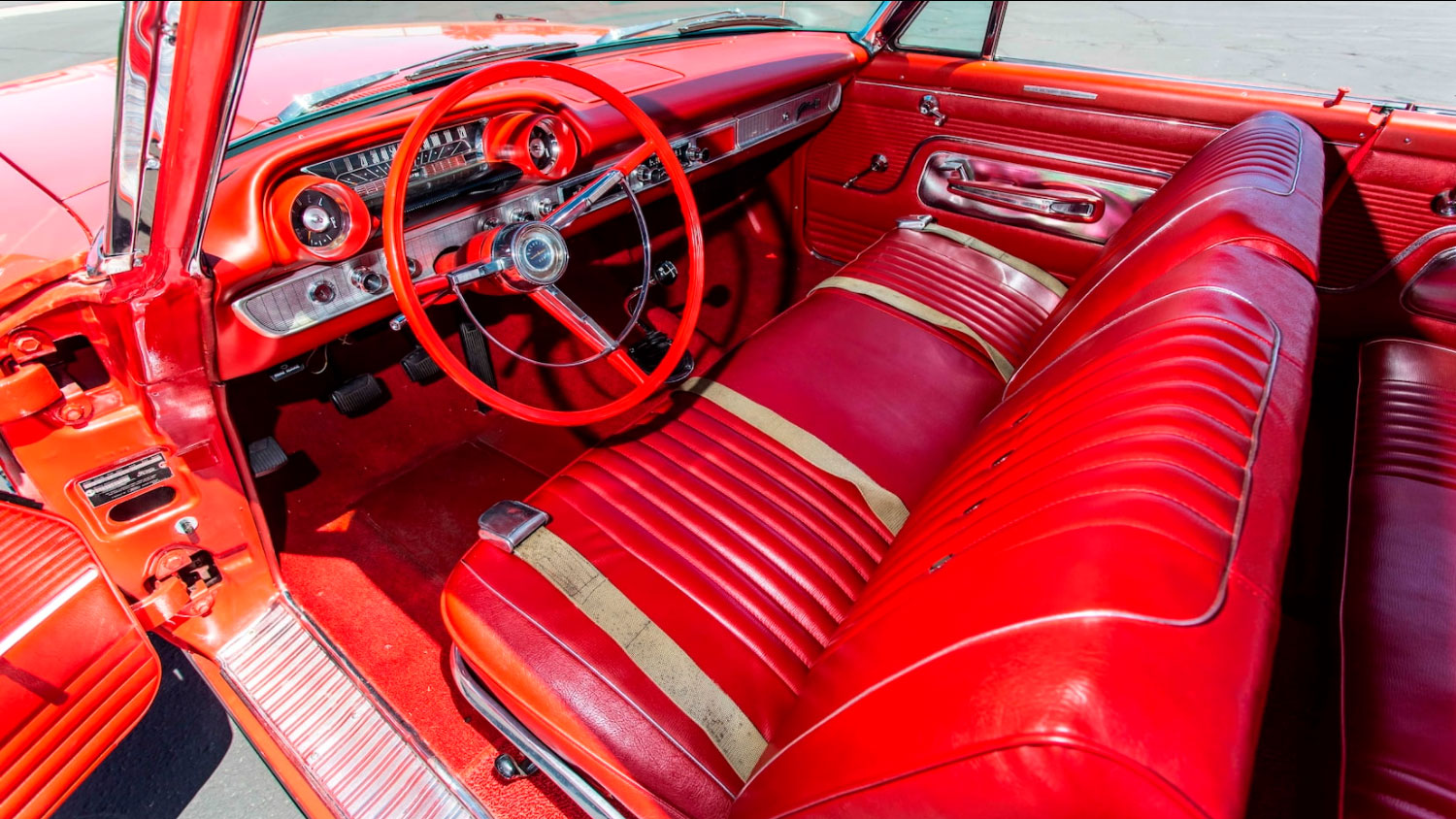 The engine compartment is reasonably clean, and appears to be fairly original (save for the H&M air cleaner, of course). Valve covers are painted in the correct gold metallic finish. As previously mentioned, the 406 cubic-inch V8 is fed by a Holley four-barrel carb, which sits beneath a rare Holman and Moody air cleaner and atop an aluminum intake. The motor is backed by a four-speed manual trans. 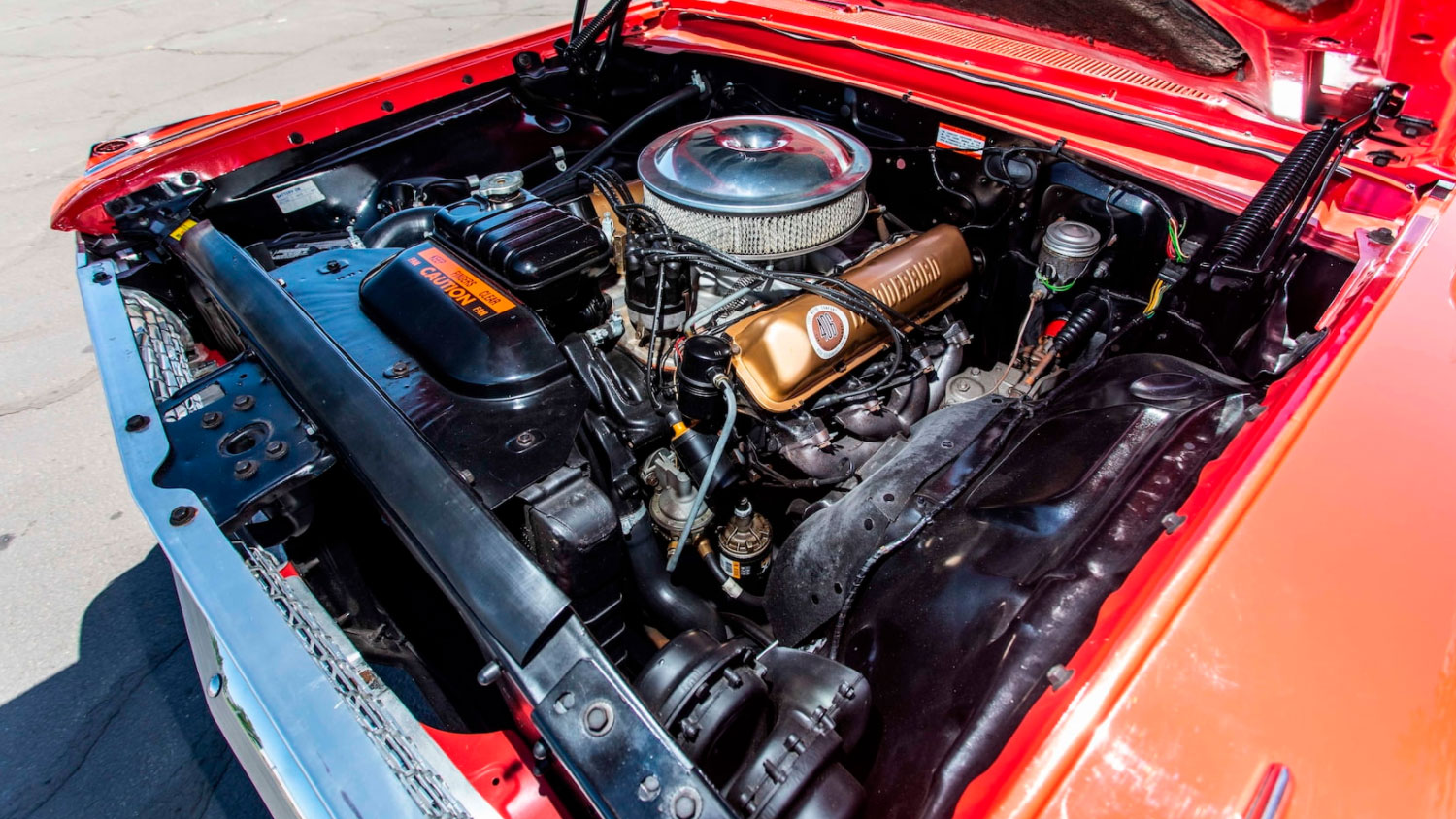 This musclebound Ford Galaxie will be on offer at the Mecum Auctions Las Vegas event taking place October 7th-9th. 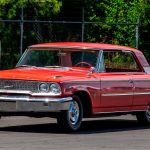 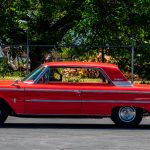 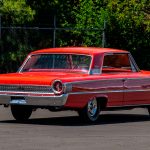 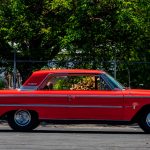 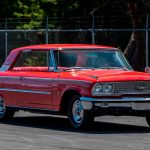 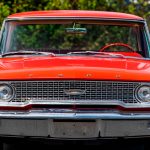 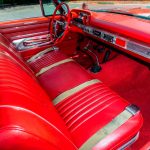 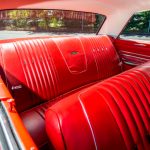 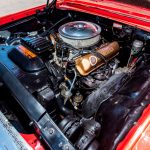 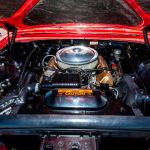 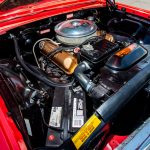