In addition to ranking first in its segment in the 2021 J.D. Power APEAL Study and beating out its competition – as well as the Jeep Wrangler – in a recent comparison test, the 2021 Ford Bronco Sport is also seemingly a very safe vehicle as well. Aside from earning a coveted IIHS Top Safety Pick+ award – the highest possible rating issued by the independent, non-profit group – we also recently saw a Bronco Sport take a terrifying tumble down a cliff and remain mostly intact. Now, the 2021 Ford Bronco Sport has also ranked third in Consumer Reports‘ latest Rear Seat Safety Study.

For some time, vehicle safety tests have focused mostly on front seat occupants, which is obviously a big oversight. Automakers also tend to install safety features like seat-belt tensioners and load-limiters in front seats, but not back seats, while only a small percentage of new vehicles offer side airbags specifically designed for rear-seat passengers.

“The rear seat has to take into account all kinds of passengers who sit there, from infants and teens to adults and ride-sharing passengers of all ages,” said Emily Thomas, an automotive safety engineer at Consumer Reports. “But our analysis shows that many automakers don’t put the same safety features in the rear that they do in the front.” 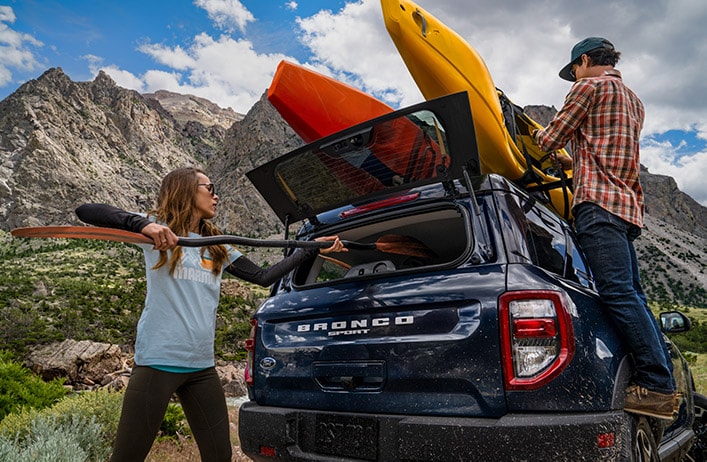 This impressive finish is particularly notable as many of the vehicles CR tested were sorely lacking in terms of rear-seat safety features. Many don’t offer any sort of advanced rear restraints or rear belt reminders, which is partially due to the fact that the Insurance Institute for Highway Safety (IIHS) only just began frontal crash tests with a dummy located in the back seat.

We’ll have more insights like this to share soon, so be sure and subscribe to Ford Authority for more Bronco Sport news and continuous Ford news coverage.