As Ford Authority reported last week, Ford announced that it will cease manufacturing in India at the Ford Sanand Assembly Plant – which builds the Ford Figo – by Q4 of 2021, while production at the Ford Chennai Assembly Plant – which builds the Ford EcoSport, Ford Endeavor, and Ford Freestyle – will end by the conclusion of Q2 in 2022. The closure of the Chennai plant and Sanand plant affect roughly 4,000 Ford India workers, who are now seeking help from the government to safeguard those jobs, according to Reuters.

“Thousands of workers are at the risk of losing their jobs as a result of Ford’s decision to shut its Chennai factory,” the Chennai Ford Employees Union said in a letter addressed to Tamil Nadu state minister T M Anbarasan. “The government needs to step in and stop this now.” The union is asking Anbarasan to create new jobs for Ford India workers affected by the Chennai plant closure, while another union – the Centre of Indian Trade Union (CITU) – recently hosted a protest against both Ford and the Indian government over the decision.

Ford’s decision to cease manufacturing in India comes as the automaker has racked up operating losses of more than $2 billion over the last 10 years, as well as a $0.8 billion non-operating write-down of assets in 2019. In addition to shuttering its manufacturing operations in India, Ford will also stop selling all of the models it produces there, replacing them with some of its more iconic models, including the Ford Mustang coupe, as well as the all-electric Ford Mustang Mach-E. 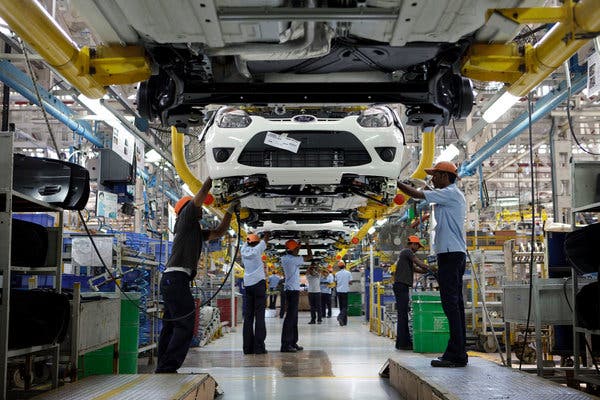 Ford has said that it “will work closely with employees, unions, suppliers, dealers, government, and other stakeholders in Chennai and Sanand to develop a fair and balanced plan to mitigate the effects of the decision.” This includes retaining 600 existing plant, parts distribution, and customer service employees, as well as expanding the existing 11,000-employee Business Solutions team in India in the coming years.

We’ll have more on Ford’s decision to cease manufacturing in India soon, so be sure and subscribe to Ford Authority for 24/7 Ford news coverage.