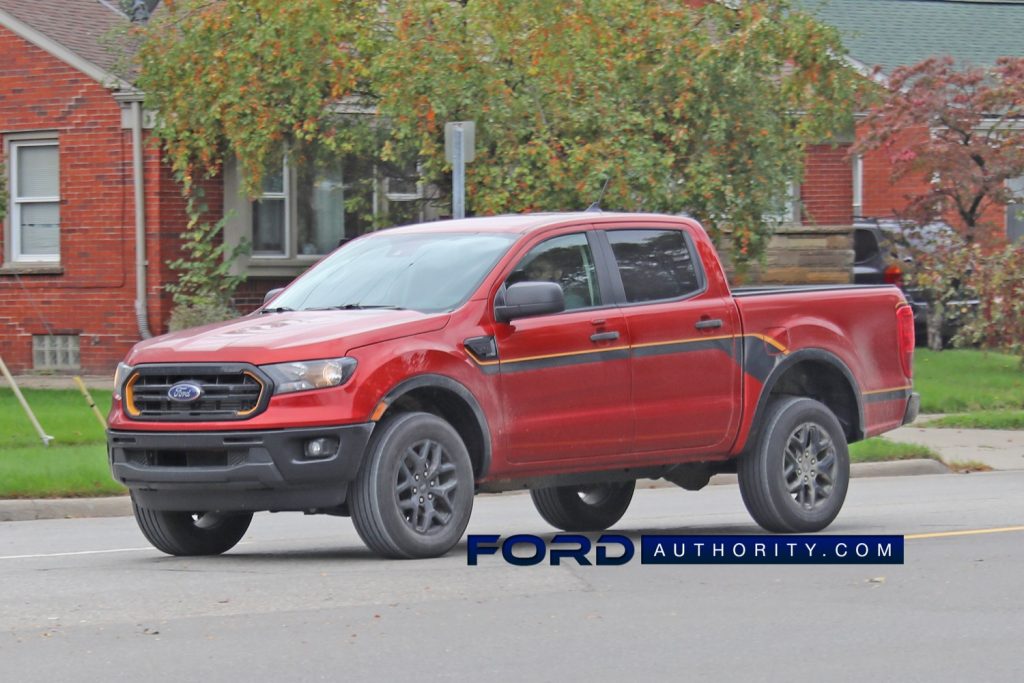 Earlier this month, Ford Authority spies spotted a Velocity Blue 2022 Ford Ranger with the Splash Package out driving around, complete with orange accents and the requisite side graphic, which can be deleted, as Ford Authority recently reported. Now, our spies have captured a 2022 Ford Ranger XLT equipped with the Splash Package and wearing Hot Pepper Red Metallic Paint. 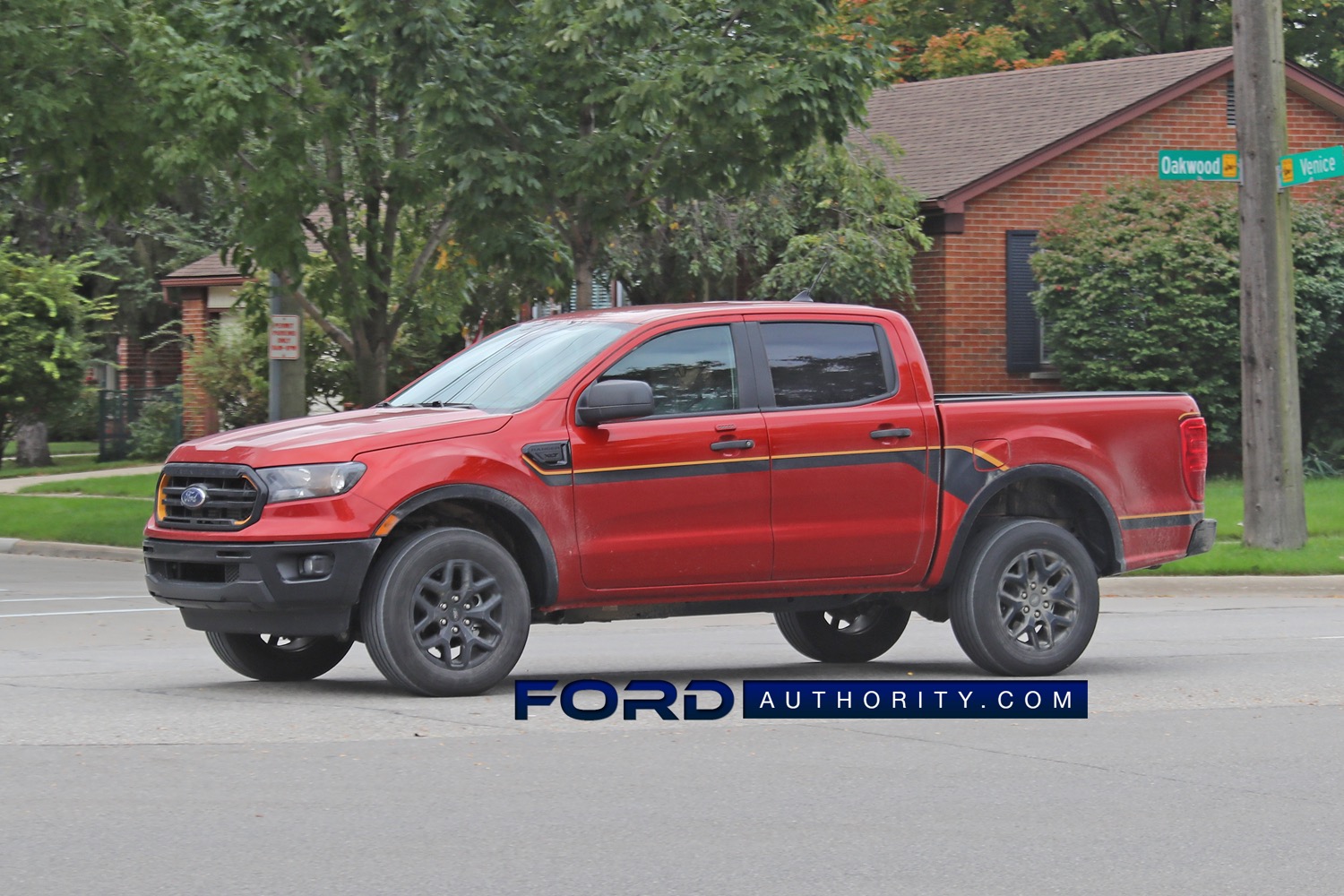 Like the Velocity Blue example from a few weeks ago, this 2022 Ford Range XLT is also wearing the side stripe that comes with the Splash Package, as well as all of the resulting add-ons. These include orange accents on the grille nostrils, as well as gloss black accents on the rearview mirror caps, bumpers, fender vents, and wheel lip moldings, and unique 18-inch, 12-spoke matte black wheels. Unlike the previously-spotted Velocity Blue Ranger, this pickup is not equipped with the optional FX4 Off-Road Package. 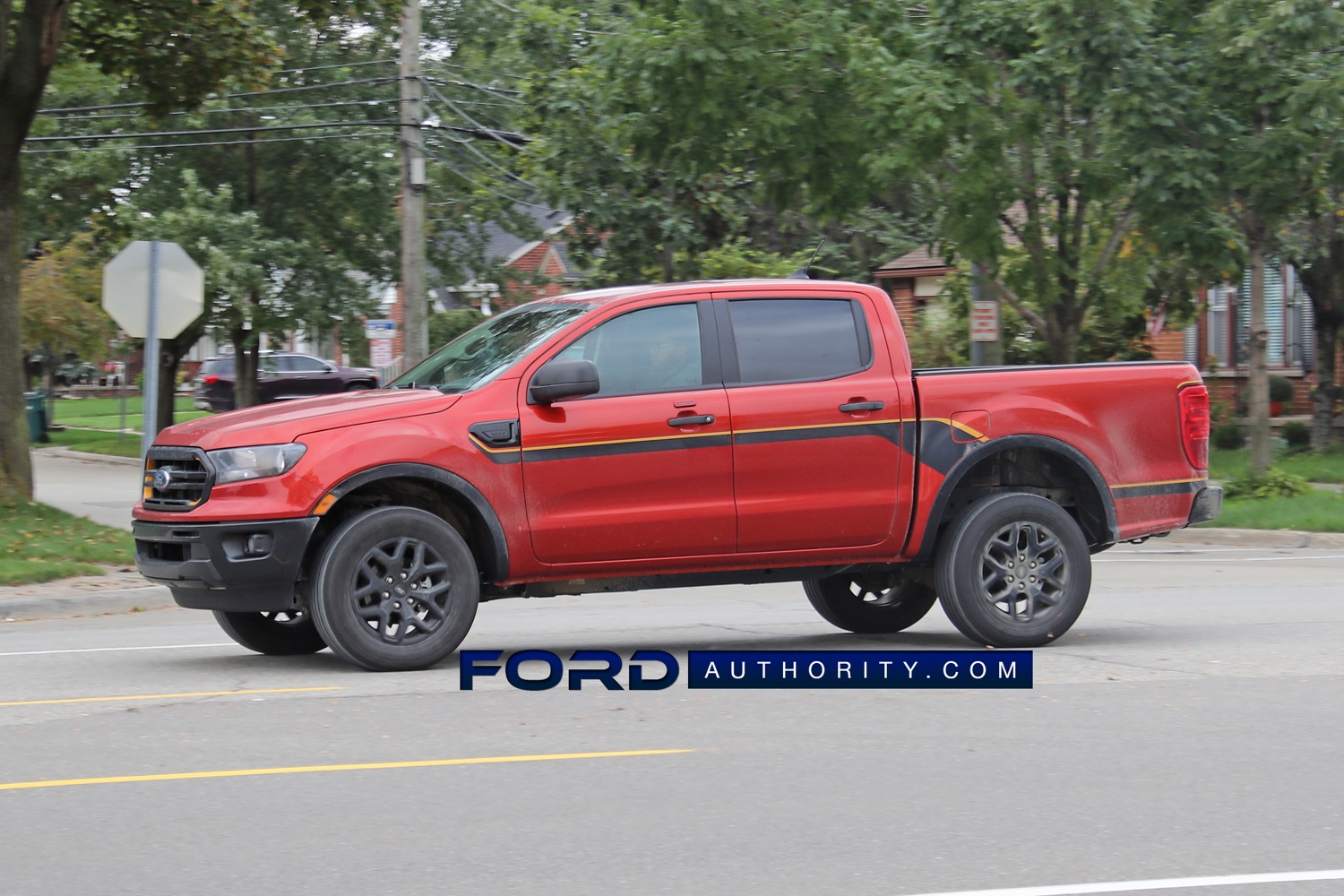 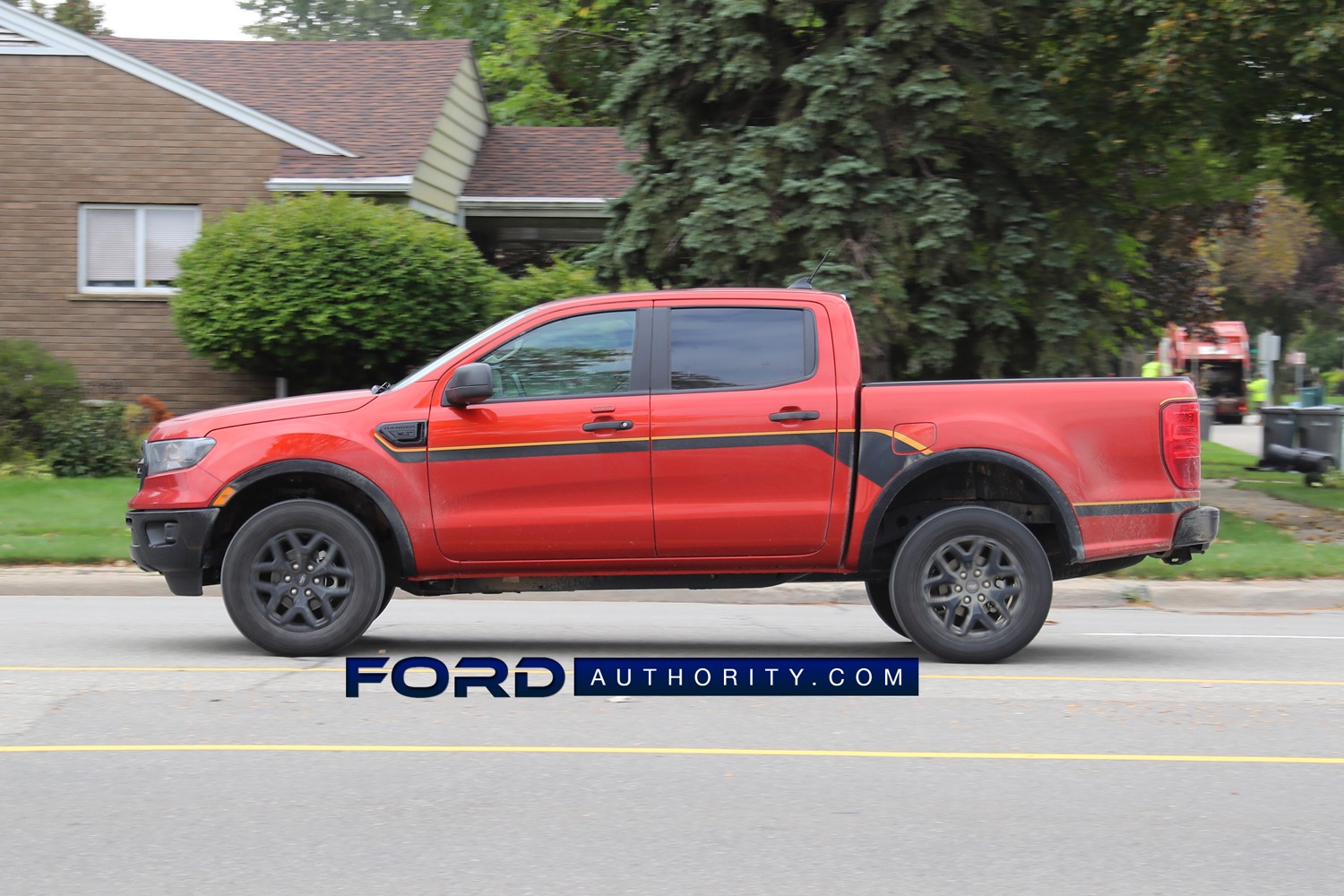 On the inside, the Splash Package adds unique seats with carbon grain, tuxedo stripes, and orange contrast stitching, which will be finished in leather on Lariat-trimmed Rangers. Lariat models also get orange contrast stitching on the dash and armrests, while all Splash Package-equipped pickups gain the same bright-colored stitching on the steering wheel, parking brake boot, and shifter. The MSRP for all of these additions is $1,495. 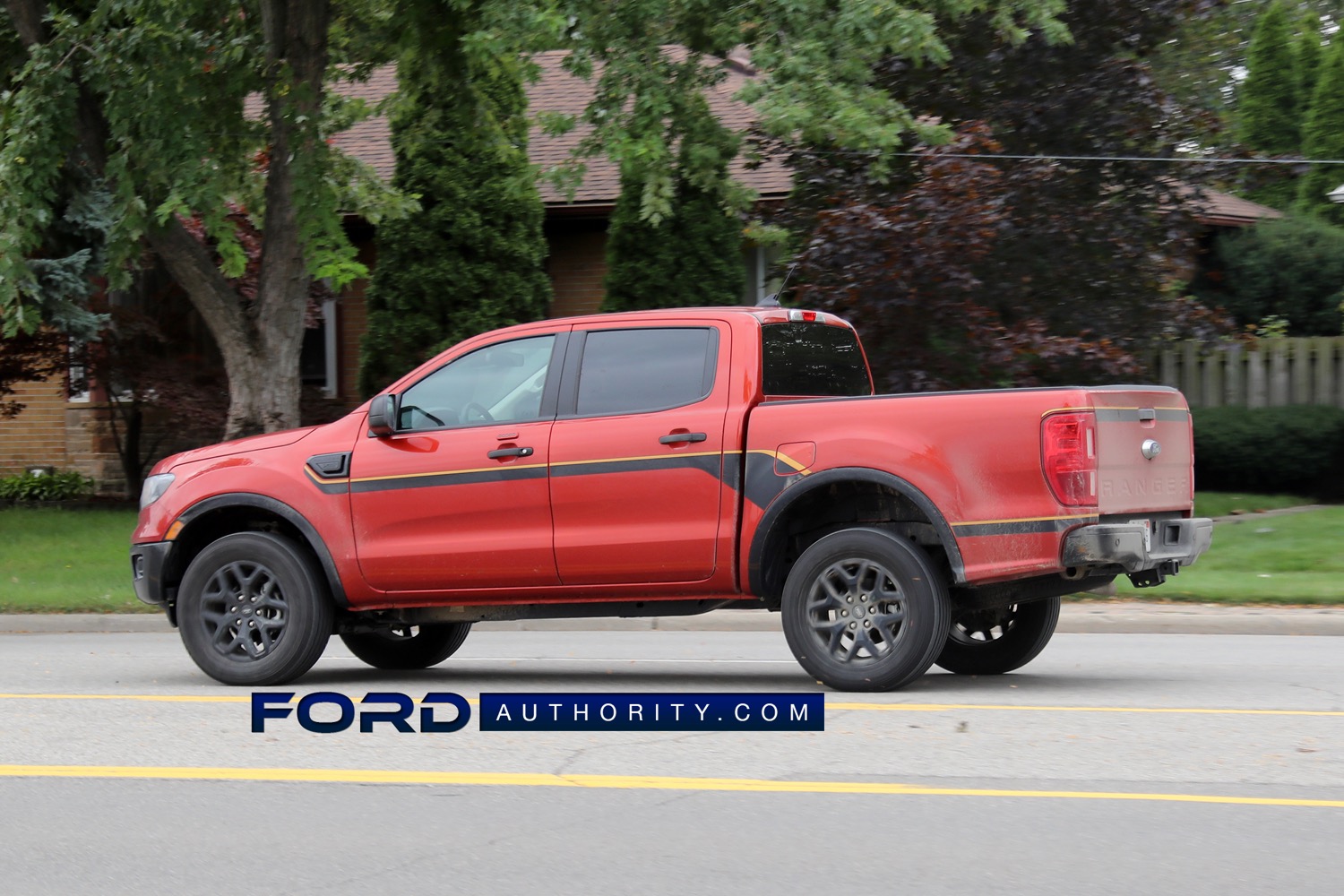 In addition to the Splash Package, customers can also opt for the Ford Ranger Splash Limited Edition, which is more of a small batch offering that will feature a number of unique colors, each produced in very small quantities. Ford hasn’t revealed what sort of shades it has planned for this special model, though it did say that the Snow Edition – presumably a white hue of some sort – will be the first in the series. Every few months throughout the year, Ford will reveal a new Splash Limited Edition pickup, each sporting its own one-of-a-kind color. Only a few hundred of each will be produced in total. 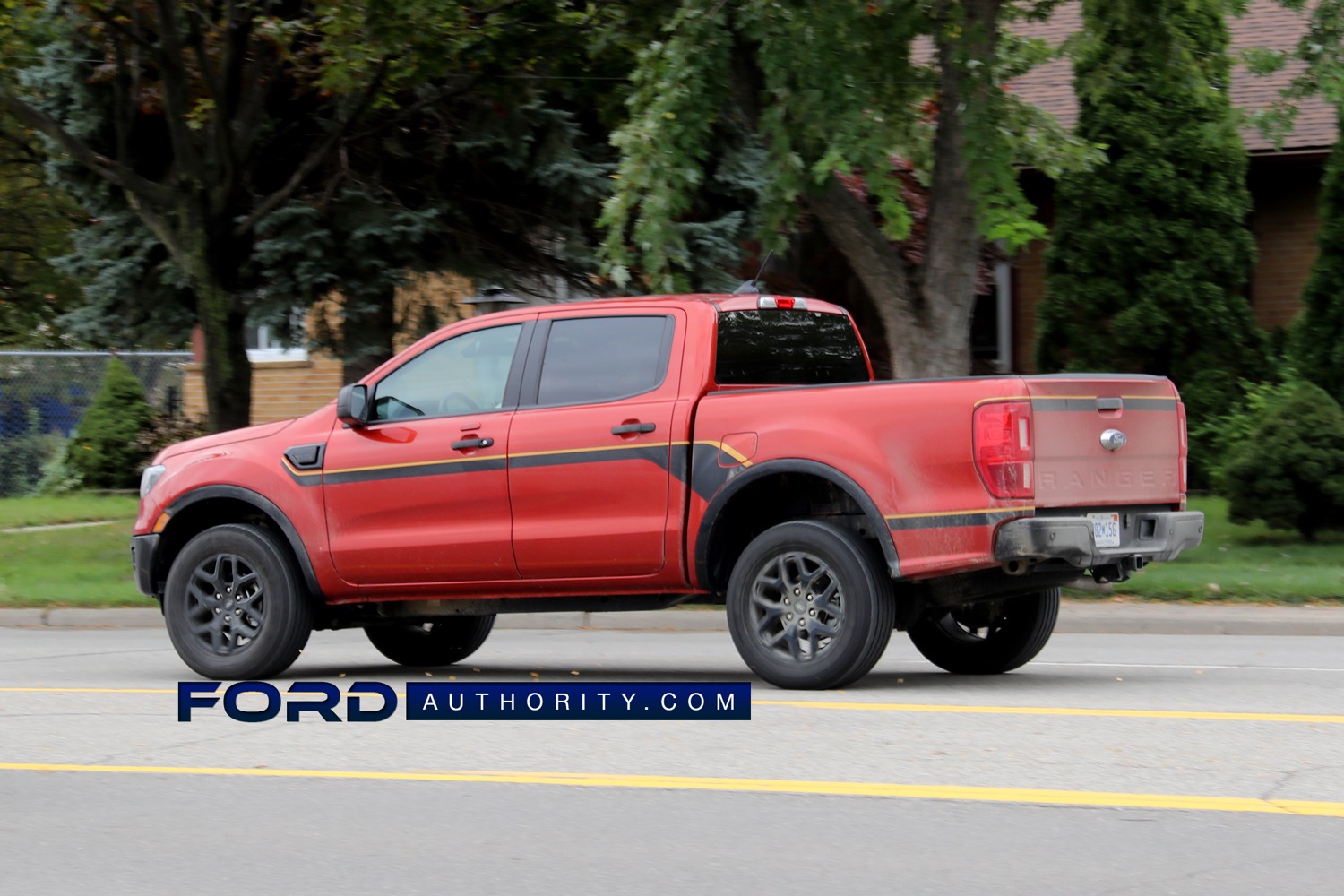 As Ford Authority reported last month, 2022 Ford Ranger order banks opened up on September 27th, 2021, while Job 1 production is currently scheduled to begin on December 13th, 2021, at the Ford Michigan Assembly Plant. Meanwhile, production of the next-generation 2023 Ranger is currently scheduled to begin at the Michigan Assembly Plant in May of 2023.

We’ll have more on the new Ranger Splash soon, so be sure and subscribe to Ford Authority for the latest Ford Ranger news and continuous Ford news coverage.

Ford And Dr Pepper Team For The Expedition 15-Pack