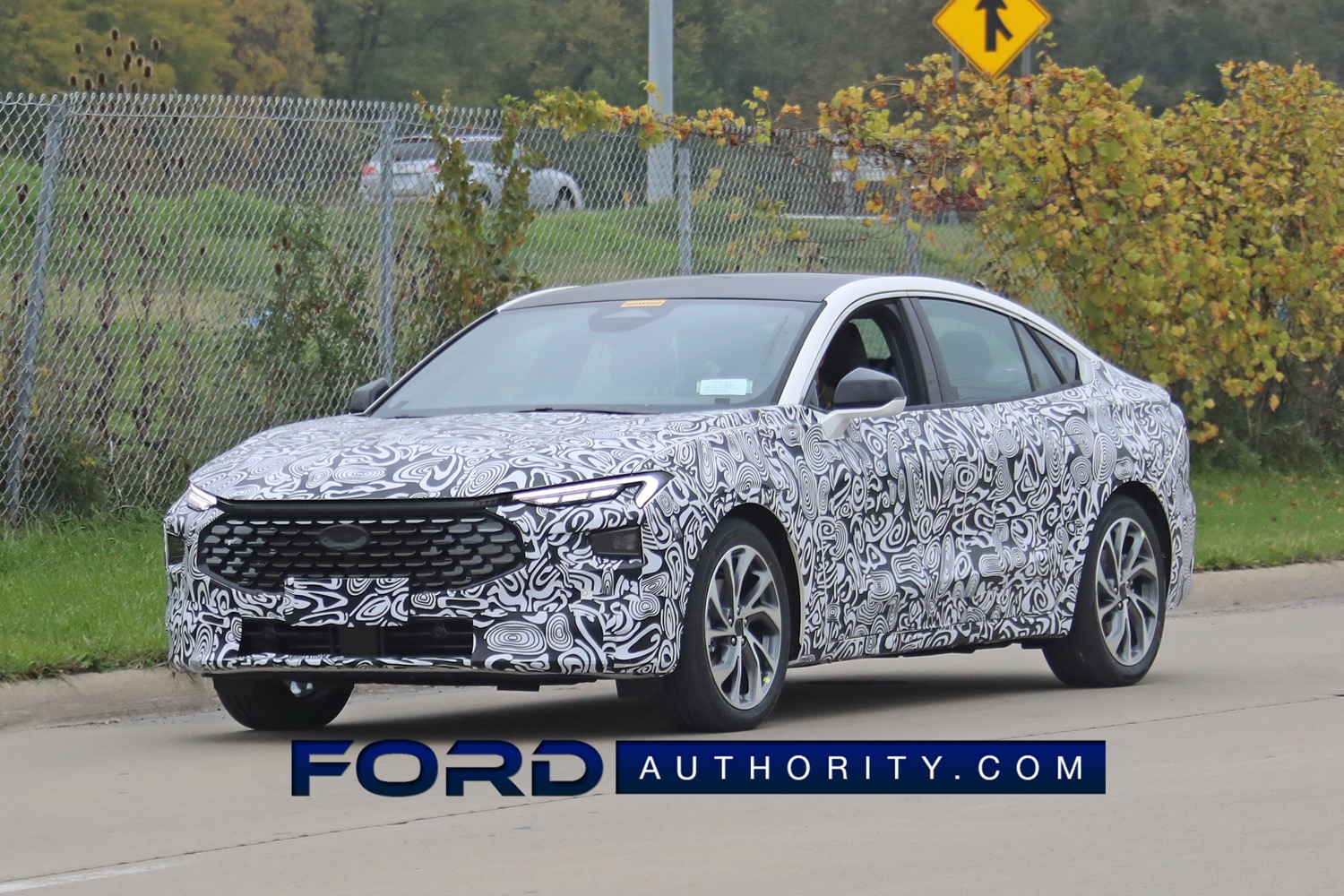 The Ford Fusion was officially discontinued in North America at the end of July 2020, while the Mondeo will follow suit in Europe at the conclusion of March 2022. However, the 2023 Ford Fusion or Mondeo will be returning as both a sedan and crossover-like wagon/hatchback. Ford Authority spies captured the next-gen Ford Fusion back in May wearing heavy camo, and earlier this month, we got our first look at the sedan’s exposed rear-end, which wears a set of Ford Mustang/Ford Mustang Mach-E-inspired taillights. Now, a 2023 Ford Fusion prototype has been spied in Metro Detroit wearing even less camo. 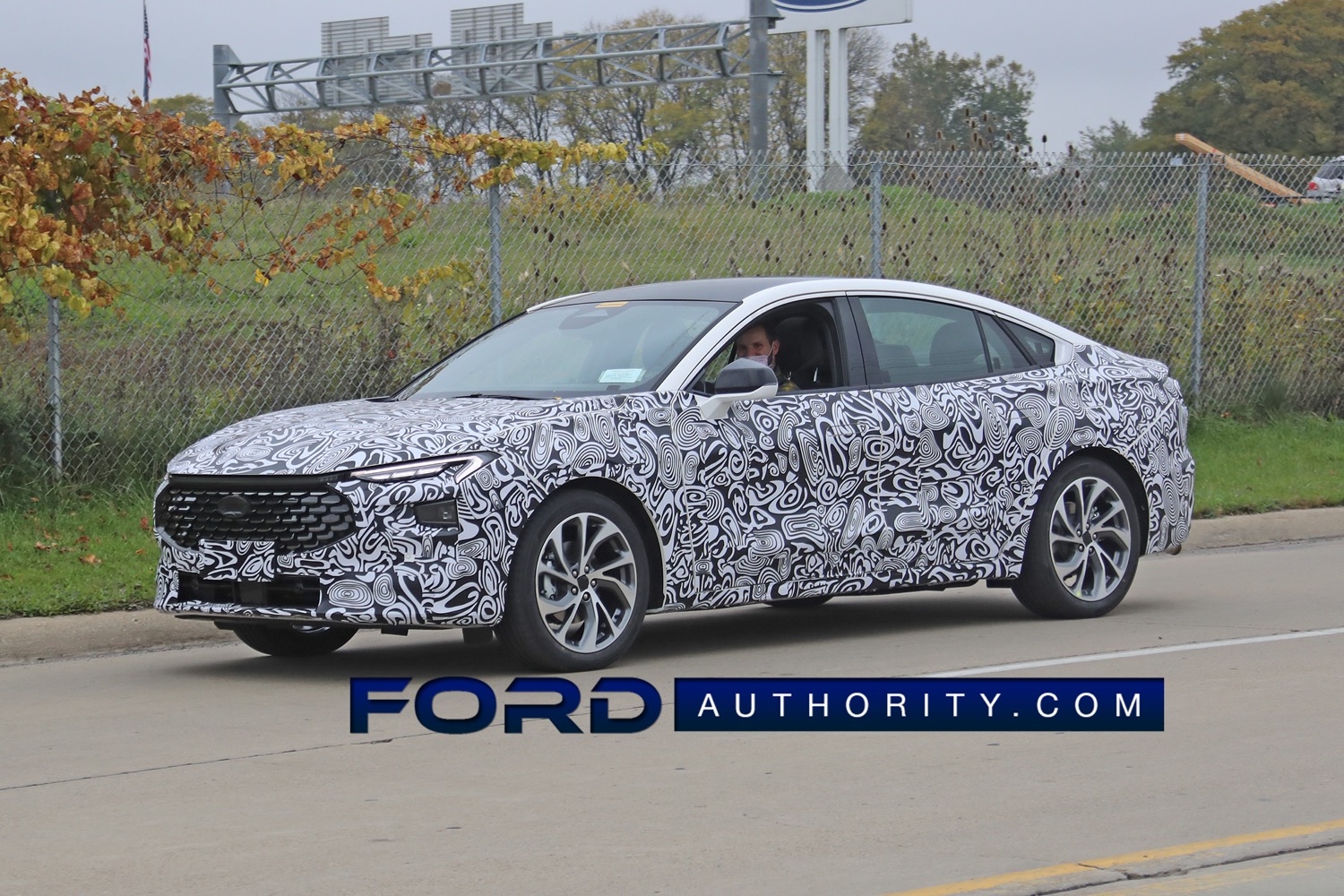 Even though this sedan was caught driving around in the Detroit area, the model isn’t destined for North America, which isn’t terribly unusual given the fact that Ford Authority spies spotted a Lincoln Zephyr prototype – a model that will be sold in China – near Dearborn early last month. 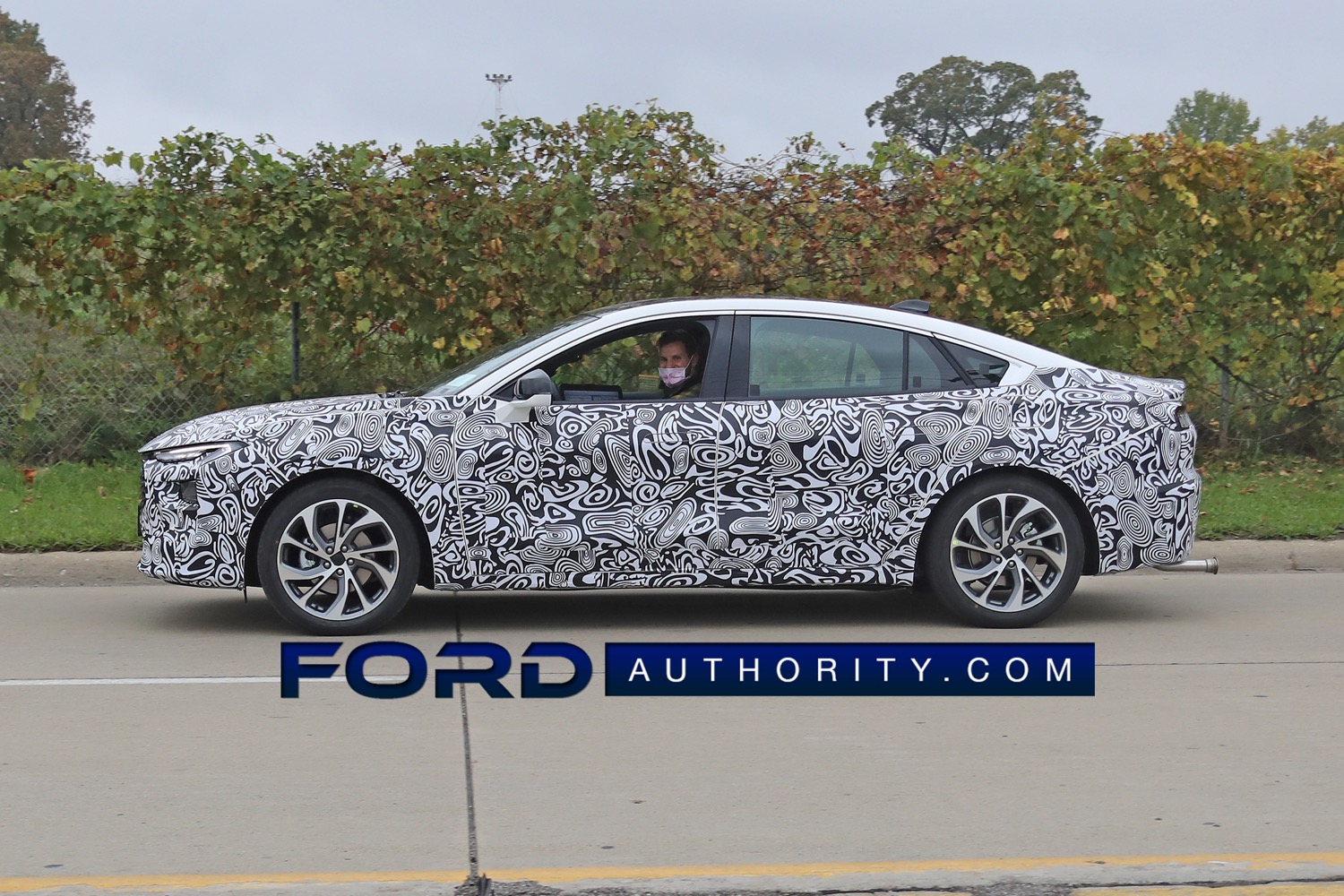 Unlike previously-spotted 2023 Ford Fusion prototypes, this one is not wearing heavy camo on the front end, giving us a good look at the sedan’s headlights and front grille, which are completely uncovered. The headlights are slim units with LED lighting that consists of a long horizontal strip along the top that curves around the outside, as well as three smaller “lines” beneath it. Overall, the headlight design is similar to what we’ve already seen from the sedan’s taillights. 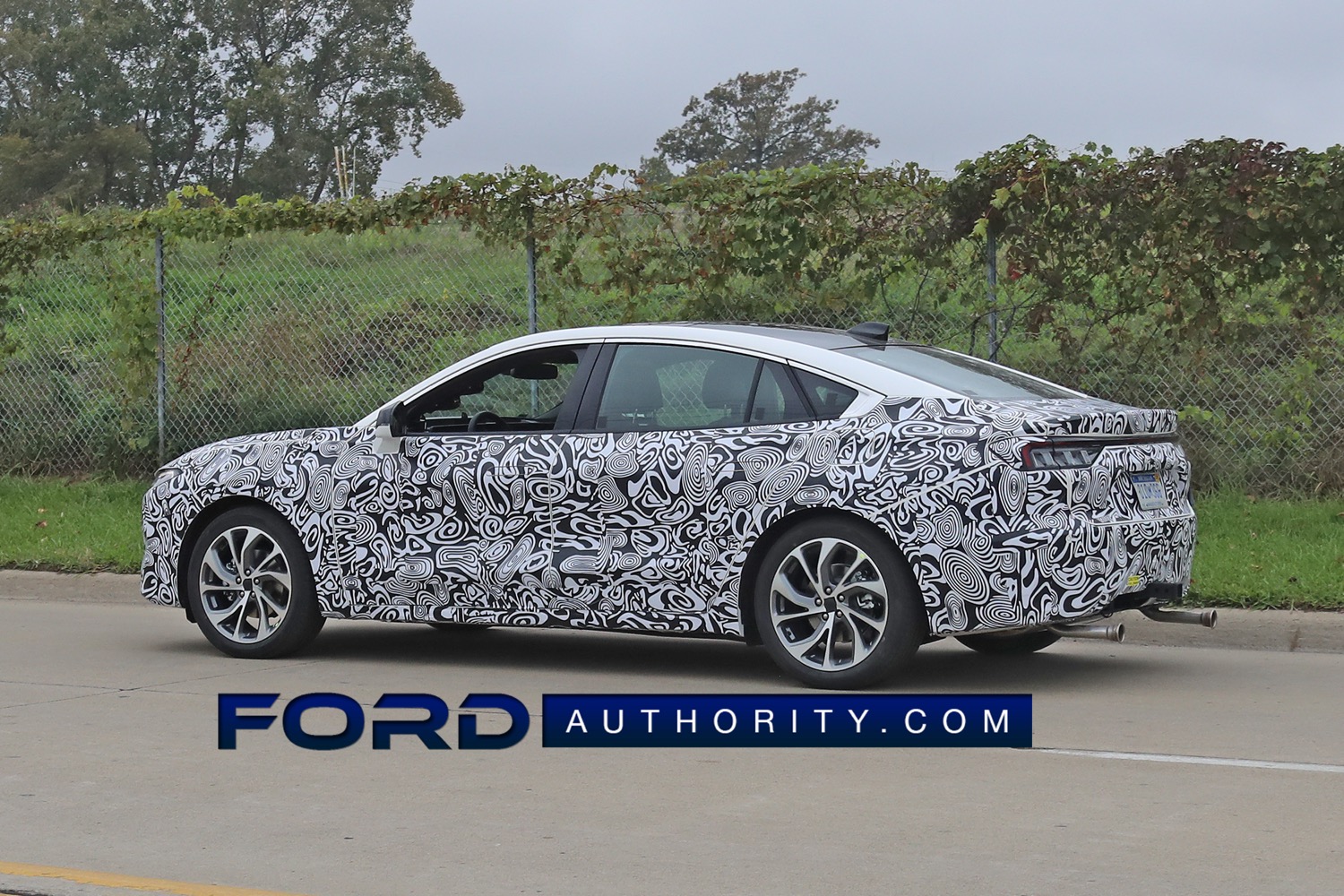 Meanwhile, the front grille is oval-shaped, like many modern Blue Oval vehicles, and contains a 3D design with smaller ovals that overlap each other. Like the rear of the car, there’s also a bar that runs the entire width of the front grille, curving upward to meet the headlights. 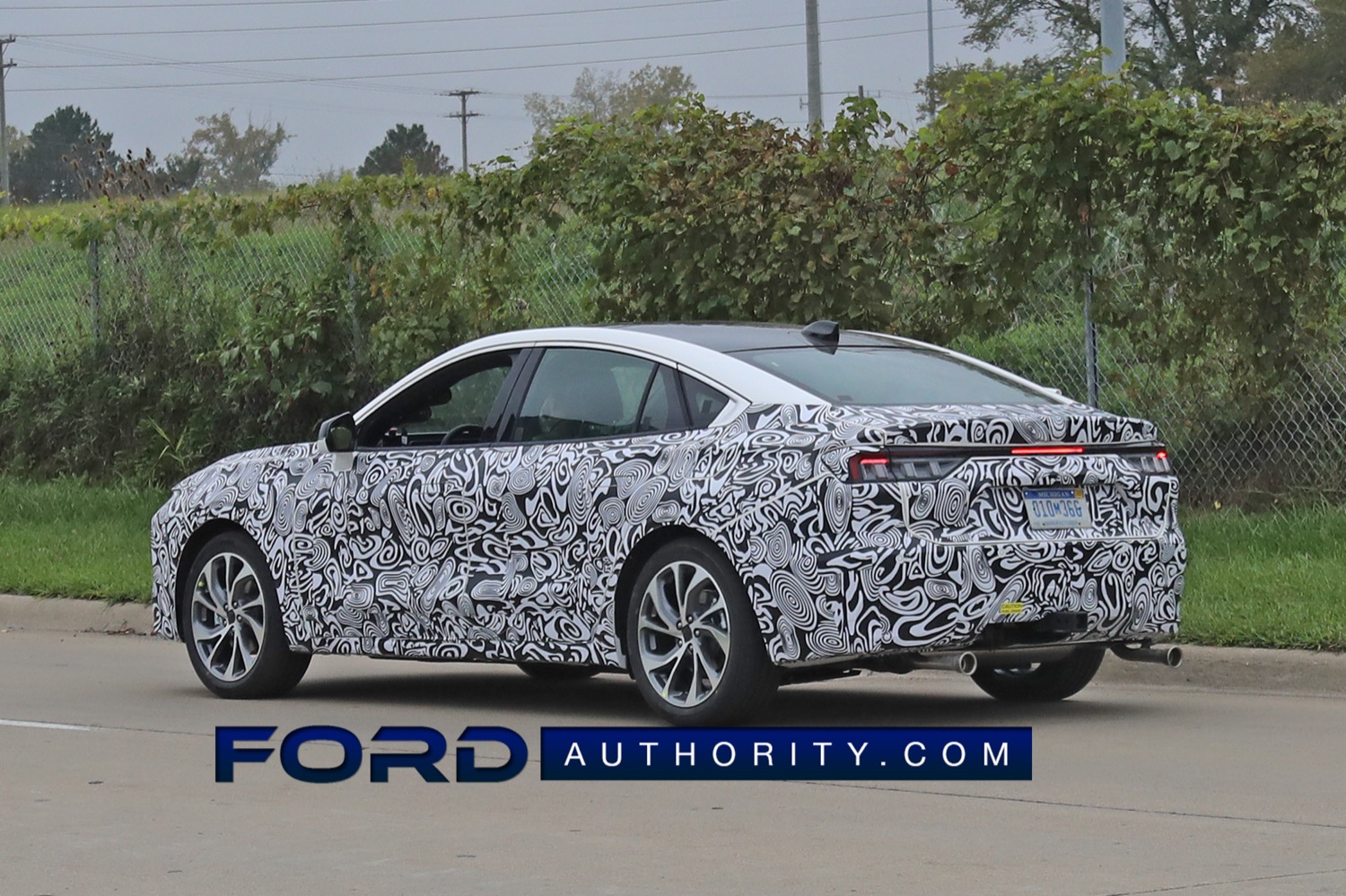 Meanwhile, in the rear, the taillights also feature long horizontal strips located above three vertical notches that curve down around the outside of the taillights. As Ford Authority previously reported, the next-gen Fusion’s taillights are clear when they’re not in use and will light up red when the lights are turned on or the brakes are applied. These pictures show how the taillights work when the brakes are applied for the very first time, and we can clearly see the third brake light, which is located in the center of the bar that spans the width of the tailgate. The next-gen Fusion/Mondeo shares much of its exterior styling with the China-only Ford EVOS crossover, though it features a lower stance. Currently, the sedan is being earmarked for China – just like the production version of the Lincoln Zephyr Reflection concept – and it’s currently unclear if it will be available in other markets, though Europe and North America will likely get the more rugged Active variant.

We’ll have more on the next-gen Fusion/Mondeo soon, so be sure and subscribe to Ford Authority for more Fusion/Mondeo news and 24/7 Ford news coverage.