Ford Motor Company has announced that the 2022 Ford Mustang Shelby GT500 will offer Code Orange as a new color. Blue Oval enthusiasts might already be familiar with the new hue, since it was introduced for the 2021 F-150 Raptor and will make its way to the upcoming 2022 Ford Bronco Raptor. 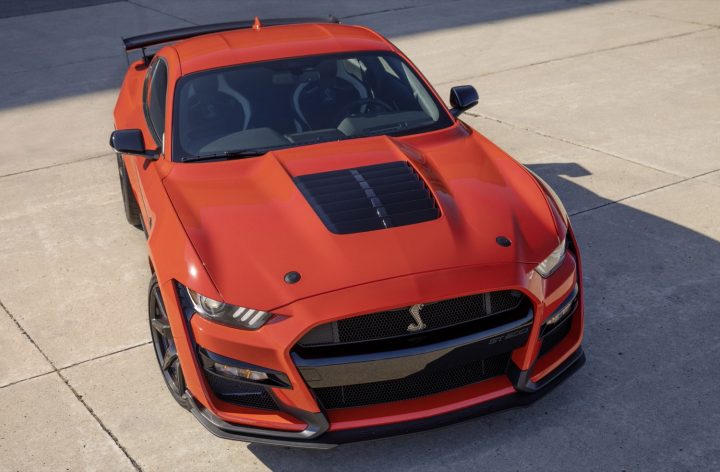 The 2022 Ford Mustang Shelby GT500 is the highest-performance pony from the factory. Power comes from the supercharged 5.2L Predator V8 rated at 760 horsepower and 625 pound-feet of torque. Tremec’s seven-speed dual-clutch transmission – the sole gearbox available on the S550-generation Mustang Shelby GT500 – sends power to the rear wheels. Adjustable MagneRide dampers mate to a set of Michelin Pilot Sport 4S tires complete the base configuration.

The Ford Mustang Shelby GT500 turns things up on the track with two optional handling packages: the $1,500 Handling Package and the $18,500 Carbon Fiber Track Pack (CFTP). The latter features 20-inch exposed carbon fiber wheels, exposed carbon fiber GT4 rear wing, rear-seat delete, and a set of Michelin Pilot Cup Sport 2 tires. Though great for the track, the Carbon Fiber Track Pack is not so great for runs down the quarter-mile because the Pilot Cup Sport 2 rubber do not hold heat as well as the Pilot Sport 4S tires’ thicker tread blocks. As drag racers probably know, heat translates to better traction upon launch.

Other changes to the 2022 Ford Mustang Shelby GT500 include the deletion of the $10,000 Carbon Fiber Handling Package, as Ford Authority was first to report yesterday. Meanwhile, the new-for-2022 GT500 Heritage Edition joins the lineup as a tribute to the 1967 Shelby GT500.

The Mustang Shelby GT500 Heritage Edition is finished in the new Brittany Blue color shared with only one other 2022 Mustang model – the Mustang Coastal Limited Edition offered on the EcoBoost Premium in either Coupe and Convertible body styles. The Heritage Edition also offers two stripe options: Wimbledon White vinyl, or hand-painted stripes in either Wimbledon White or Absolute Black.

We’ll have more on all things Mustang soon, so be sure to subscribe to Ford Authority for Ford Mustang news and non-stop Ford news coverage.