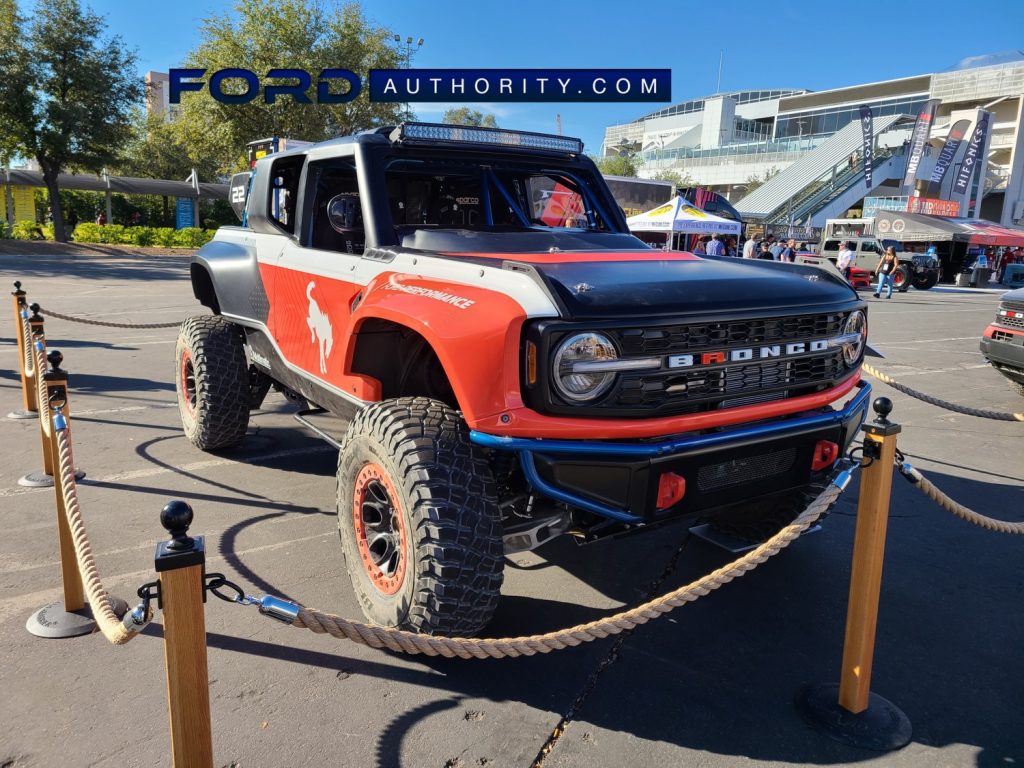 Bronco Chief Engineer Eric Loeffler told Ford Authority last September that FoMoCo had no plans to install its 5.0L Coyote V8 in the Ford Bronco, and that the automaker hadn’t even tried to fit the larger engine in its rugged SUV. Fast forward a year plus, and the 2023 Ford Bronco DR, which was revealed earlier this week, arrives on the scene packing a 5.0L Coyote V8, albeit in a $250,000 racer that isn’t street legal. Now, we’re getting our first real-world look at the 2023 Ford Bronco DR on display at the 2021 SEMA Show. 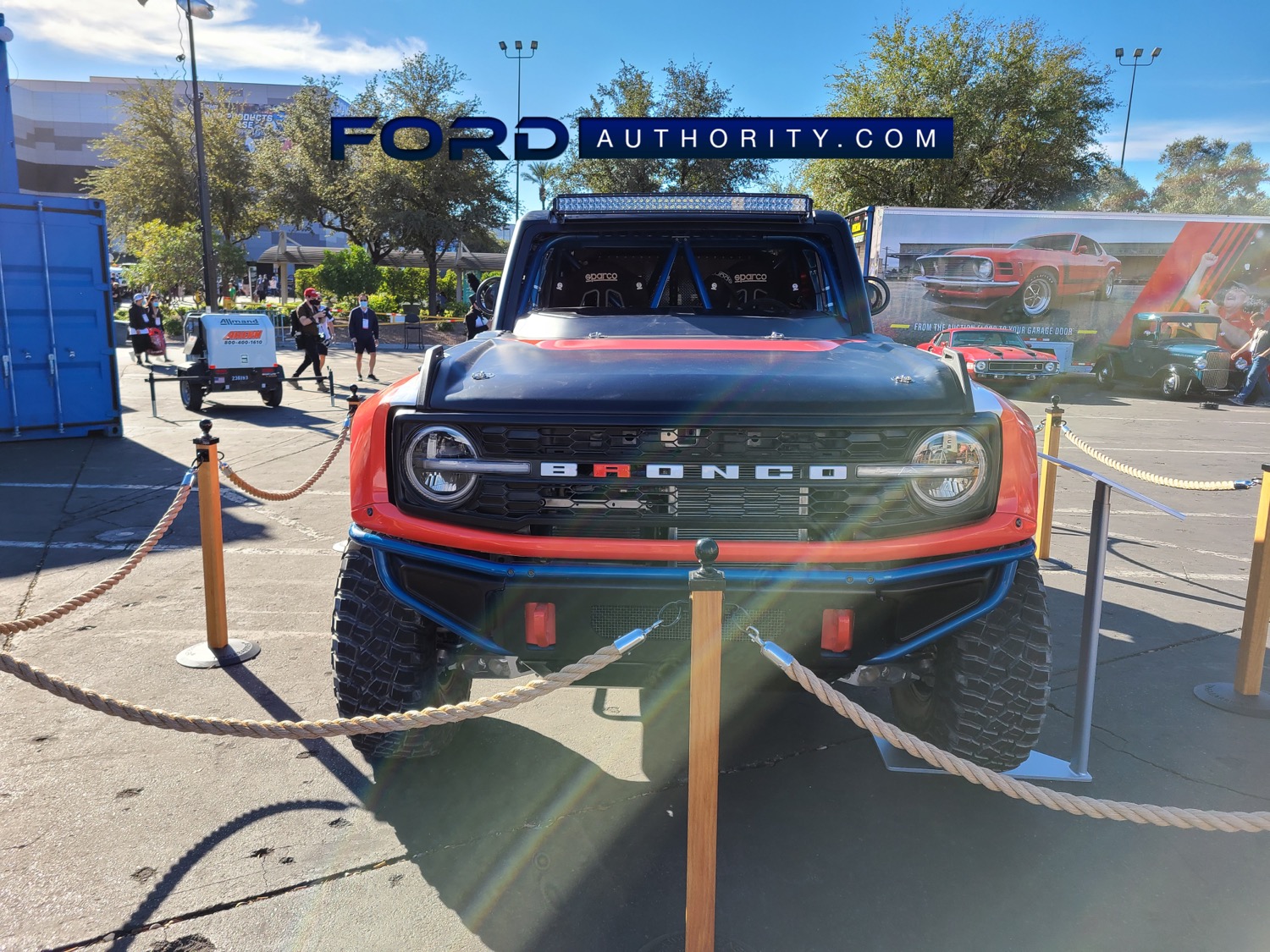 The Bronco DR looks far different than its road (and off-road) going brethren, starting up front with a large tubular metal bumper and roof-mounted LED light bar, a single-piece grille, and the same round headlamps, taillamps, and trail sights as the production Bronco. Other notable features include beefy red tow hooks, as well as a red “R” in the front grille’s “Bronco” script, which is present on the Bronco R and Ultra4 racers. 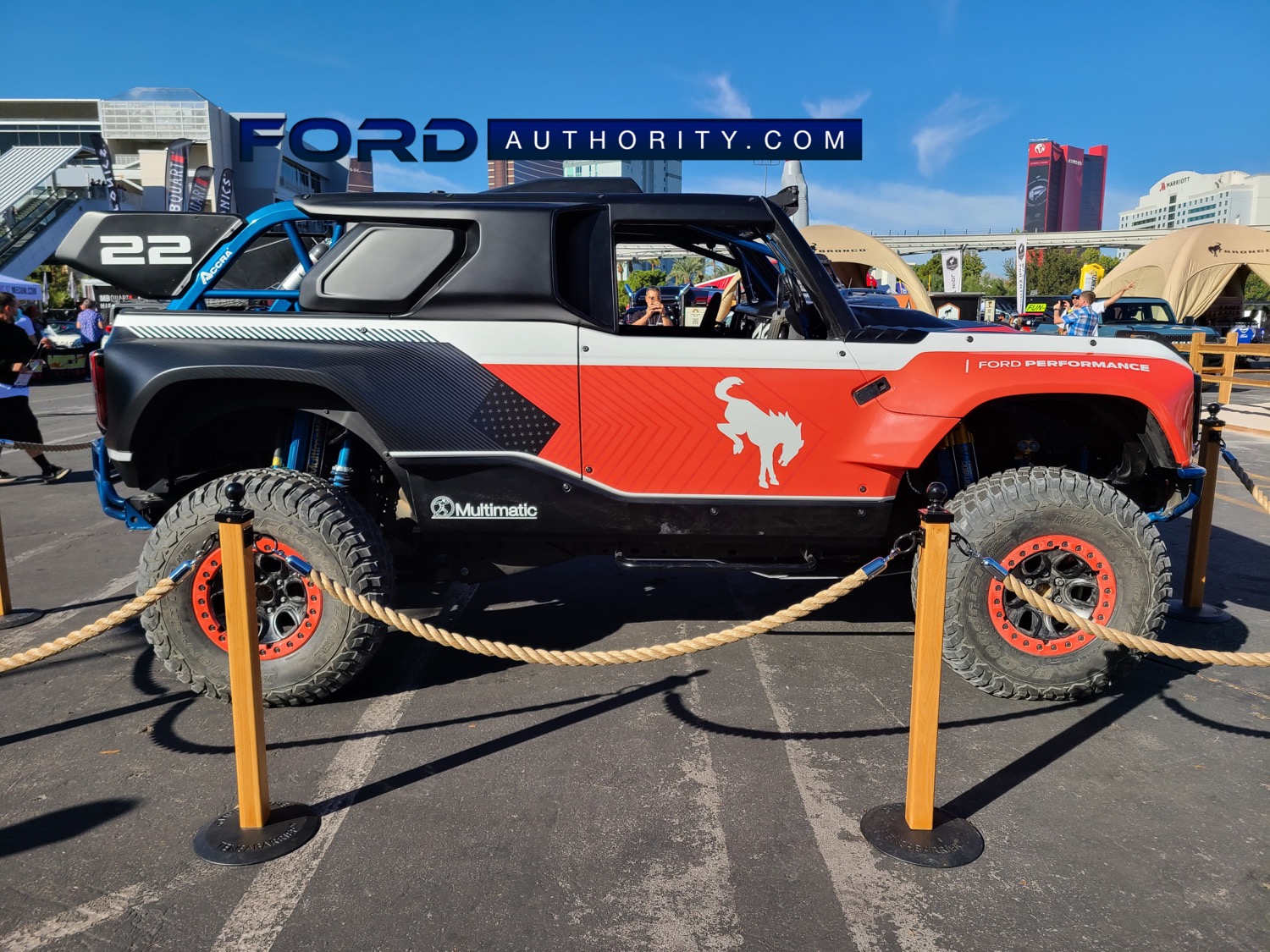 The Bronco DR retains the production four-door model’s frame and body structure but features side panels influenced by the Bronco R which take the place of standard doors. The stock body panels have also been replaced with resin transfer molded (RTM) fiberglass panels to help shed weight. The DR rolls on a set of beadlock wheels wrapped with 37×12.5R17 BFGoodrich Mud-Terrain T/A KM3 all-season tires, which feature a Krawl-TEK compound for improved grip on rock and slick surfaces and a Linear Flex Zone that provides better grip when the tires are aired-down. 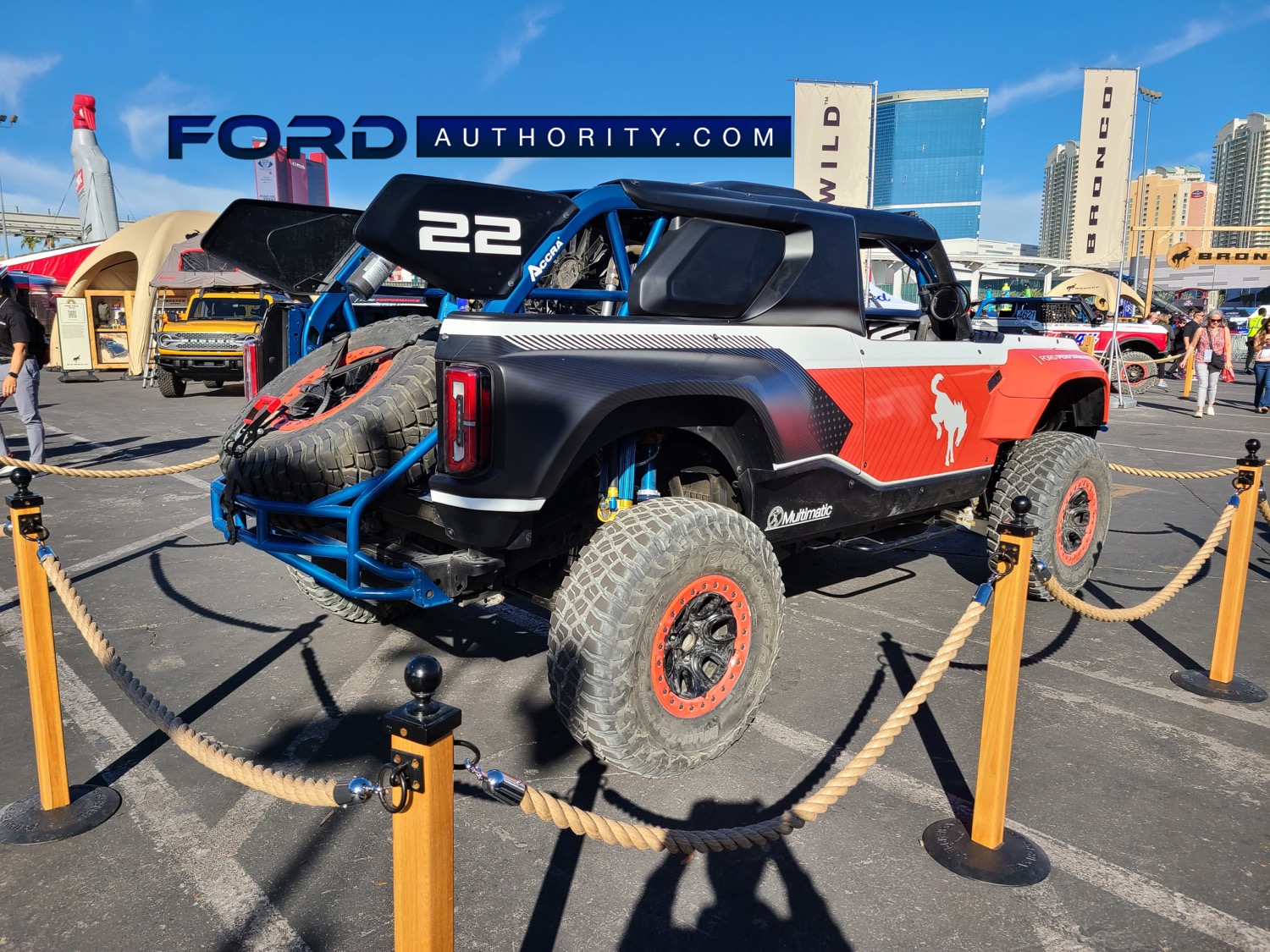 Moving around back, the 2023 Ford Bronco DR features an open rear section that reveals the SUV’s blue Multimatic FEA-optimized full safety cage with integrated OE ACCRA tubes, which also holds a spare tire. Winglets are attached to the upper portion of the cage to help direct airflow, while a rear-mounted radiator with a pair of large fans aid cooling efforts. The entire body is covered in a Ford Performance red, white, black, and blue livery. 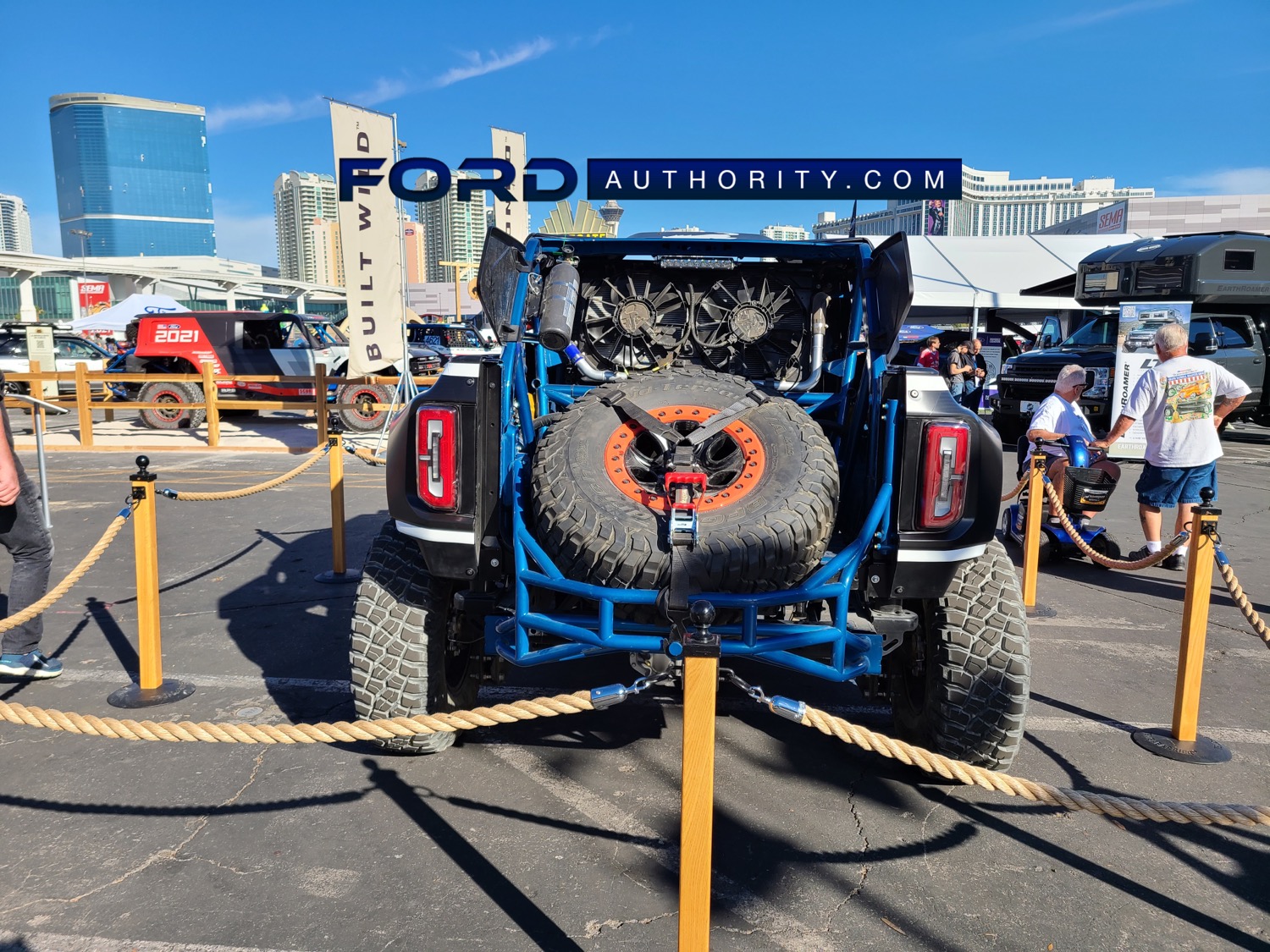 Aside from its 400+ horsepower V8, the Bronco DR is fitted with a host of suspension modifications, including an enhanced version of the Bronco’s High-Performance Off-Road Stability Suspension (H.O.S.S.) system, Multimatic Positional Selective DSSV Dampers, and Multimatic-designed billet aluminum lower control arms. 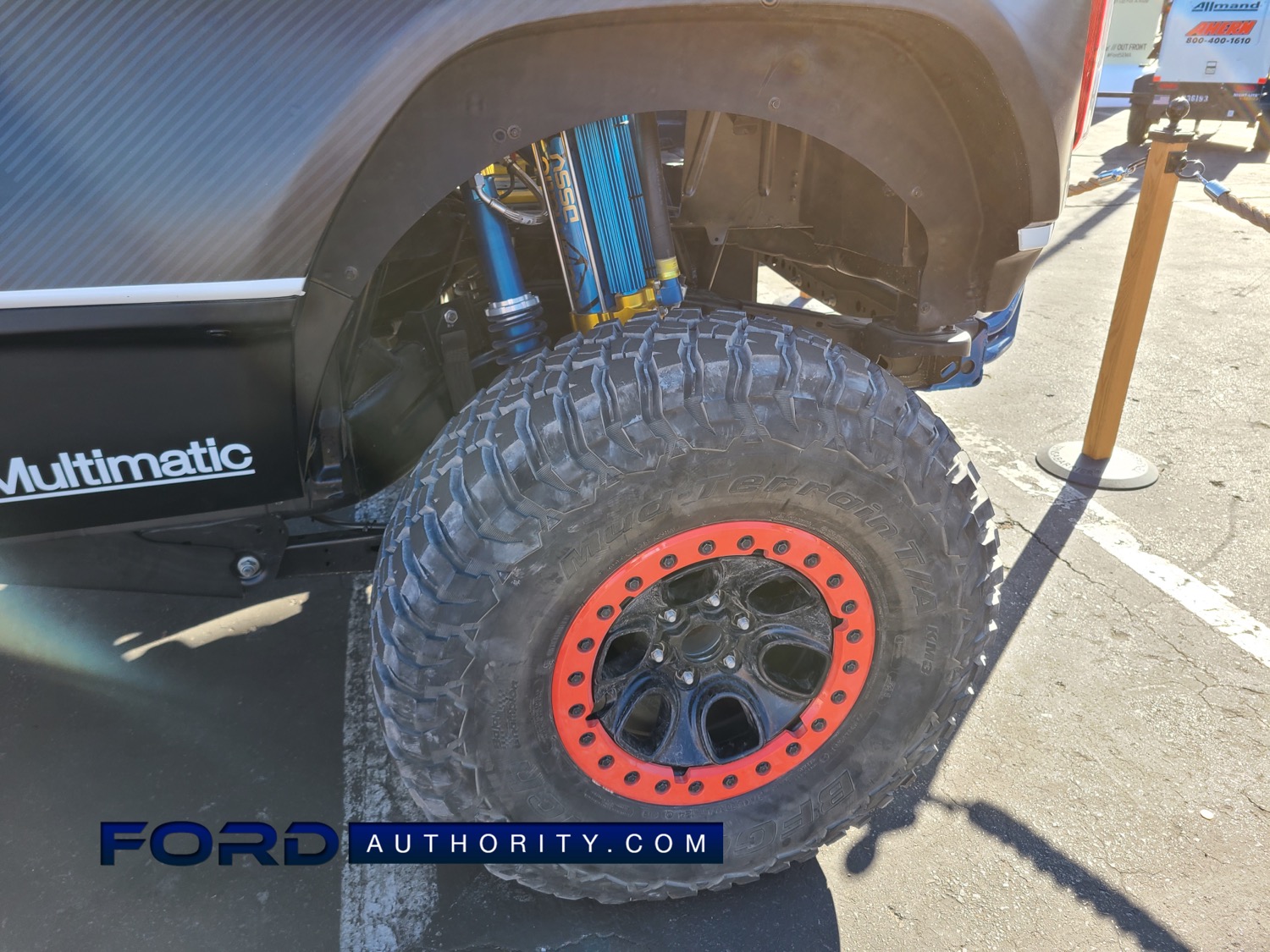 We’ll have more on the Bronco DR soon, so be sure and subscribe to Ford Authority for more Ford Bronco news and around-the-clock Ford news coverage.