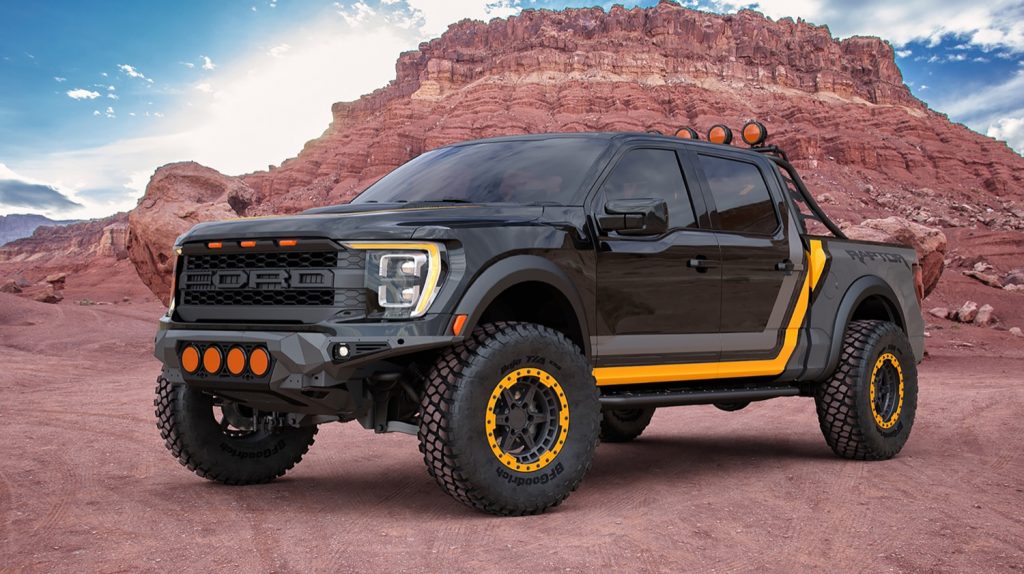 The 2021 SEMA Show kicks off this week in Las Vegas, and Ford has quite a few custom vehicles and cool new parts and accessories to show off. That includes more than one Ford F-150 build, as well as a few custom Ford Maverick, Ford Ranger, and Ford Super Duty pickups, a couple of Ford Mustang Mach-E builds from different aftermarket companies, and even a Ford Mustang EcoBoost High Performance Package. Now, we can also add the Addictive Desert Designs F-150 Raptor to that list as well.

The Addictive Desert Designs F-150 Raptor takes full advantage of the company’s years of producing popular aftermarket bumpers by adding those same components to the 2022 model year pickup. However, ADD also provided its own bed-mounted tire rack, rock slider steps, and chase rack to the mix, giving the off-road menace a place to store an extra tire and other gear, as well as protection from the more jagged parts of nature.

ADD hasn’t yet announced what sort of wheels and tires this F-150 Raptor rolls on, but they look rather aggressive. The black beadlock wheels feature yellow rings for contrast, which also match the truck’s custom graphics. A yellow upswept stripe on the body is also accented by a gray portion behind it, lending a head-turning look to the aggressive build.

Rigid Industries provided a host of LED lighting for the build as well, which resides in both the front bumper and the chase rack, and likely out back to boot. No word on whether this F-150 Raptor has any suspension or performance-oriented upgrades, but we’d wager that there are some present here. Ford’s Pro Power Onboard generator is another nice touch, providing plenty of portable power for when this truck is taken off the grid to get dirty.

We’ll have much more from the 2021 SEMA Show to share this week, so be sure and subscribe to Ford Authority for more Ford F-Series news, Ford F-150 news, Ford F-150 Raptor news, and ongoing Ford news coverage.