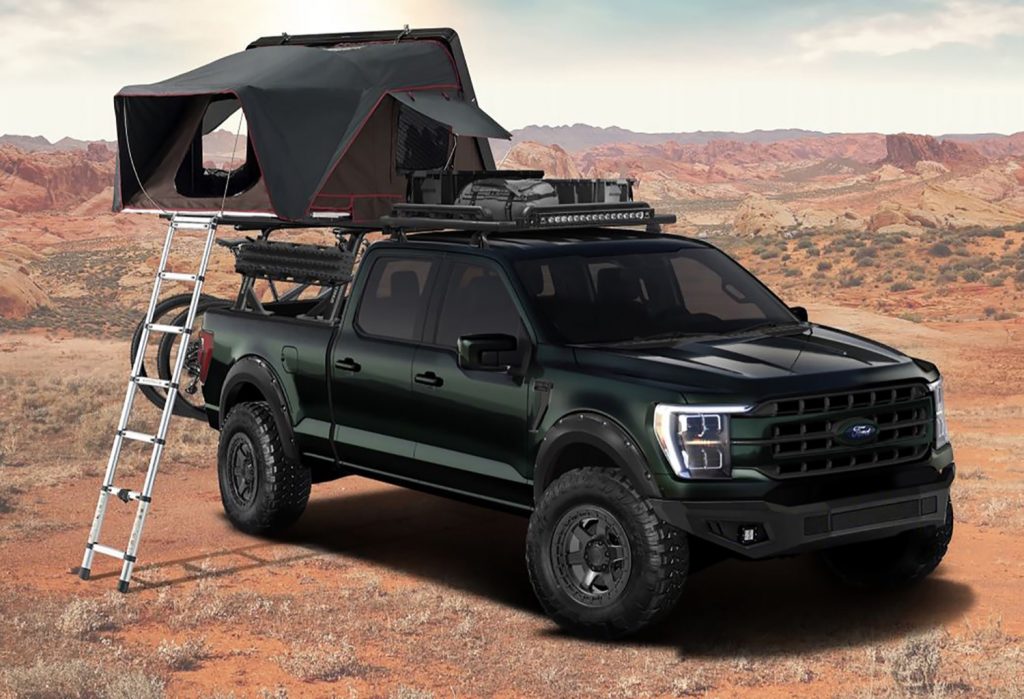 The 2021 SEMA Show kicks off this week, and Ford has a host of custom vehicles and cool new parts and accessories on-site in Las Vegas to show off. That includes, of course, a number of Ford F-150 builds, including the Hellwig F-150 PowerBoost Hybrid, as well as more than one custom Ford Maverick, Ford Ranger, and Ford Super Duty build from various aftermarket companies. Now, we have yet another SEMA pickup to share – the BTR Edition Ford F-150 Tremor, which was designed and built to be the ultimate camping vehicle.

The BTR Edition Ford F-150 Tremor contains a host of upgrades, starting up top with a Ford Licensed Accessories Yakima roof rack. That rack is put to good use with a rooftop tent that gives its adventurous owner and their guests a place to sleep, while a built-in shower is nice for those overnight stays in the middle of nowhere as well.

When everyone gets hungry, a pull-out kitchen with running water is capable of cooking up some gourmet meals, which means no roughing it with a fire or being forced to eat pre-packaged goods. There’s also a bike rack mounted out back, so the owner can bring some two-wheelers along for side adventures or covering trails.

The BTR Edition F-150 Tremor is also equipped with FoMoCo’s Pro Power Onboard generator, which it takes full advantage of with a Ford Performance Parts refrigerator and freezer for keeping food and drinks extra cold, as well as a projector located in the rear of the pickup for late-night entertainment. Overall, the BTR Edition F-150 Tremor has pretty much everything one might need for the most epic camping trip imaginable, or just a good time hanging out in the backyard without the need for extension cords or other extras.

We’ll have much more SEMA coverage to share this week, so be sure and subscribe to Ford Authority for the latest Ford F-Series news, Ford F-150 news, and non-stop Ford news coverage.