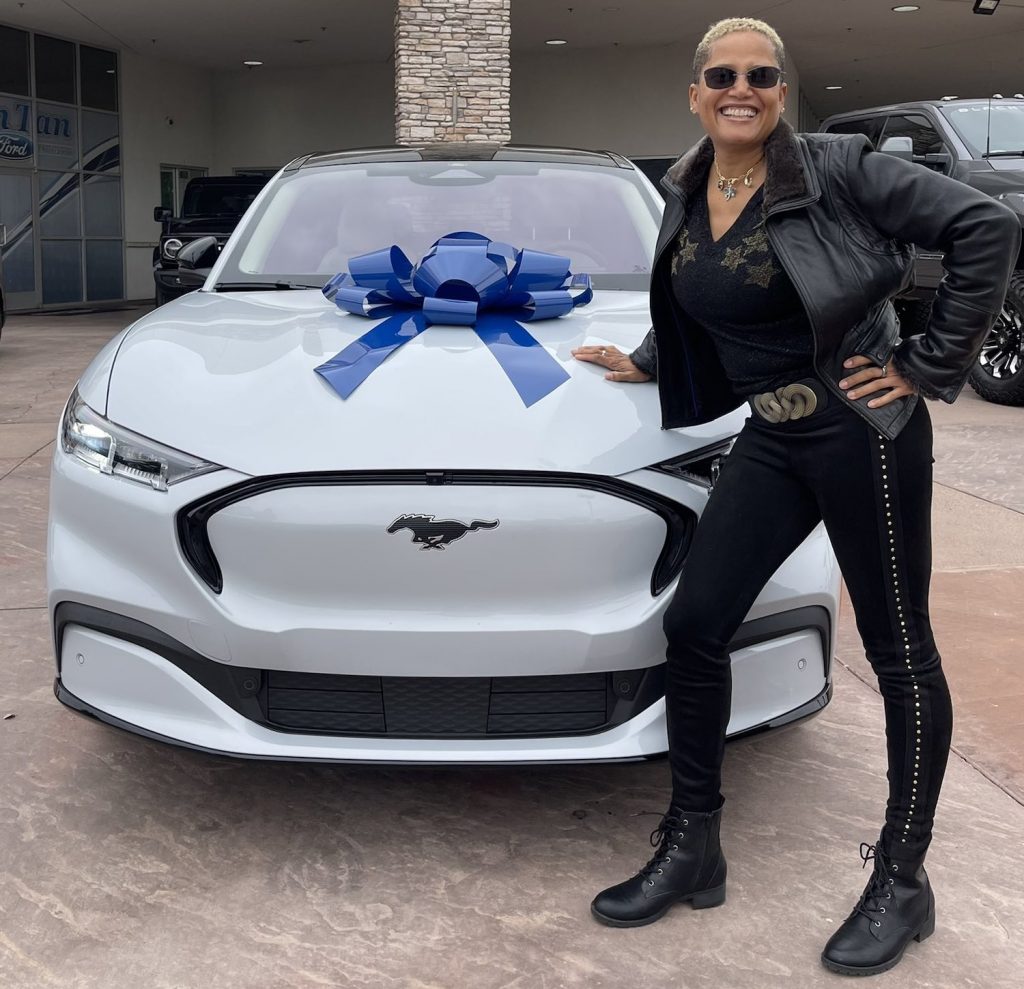 The Ford Mustang Mach-E has won over its fair share of critics and shoppers alike in recent months, landing on Consumer Reports‘ list of recommended cars and Kelley Blue Book’s top ten most considered electrified models list, while over 90 percent of owners recently said they would recommend the EV to other customers. The Mustang Mach-E is proving to have broad appeal as well, rather than just attracting young, tech-savvy folks. Thus, it’s no surprise that SpaceX astronaut Dr. Sian “Leo” Proctor has chosen the EV crossover as her personal earth-bound ride.

Proctor – who was part of the Inspiration4 crew that embarked on the very first private mission to space – recently posted a photo of herself standing next to a Space White (appropriately enough) Ford Mustang Mach-E wearing a big blue bow on Twitter, but didn’t reveal if it was a self-gift or if it was gifted by someone else. However, this isn’t Proctor’s first Ford – she also owned a Bronco II when she was attending grad school.

“I had some fantastic adventures in it,” Proctor said. “I love that the Bronco is back but I needed an EV for all the city driving I’m doing. I’m going back to work at my community college district and will be visiting schools doing education outreach all over the Phoenix valley.”

Tesla is a great company & I LOVE SpaceX. But there were many factors to my decision. A year ago I was divorced, broke, & living w/my brother. What a difference a year can make! I’m full of #gratitude for my 1st EV & I believe we are stronger working together toward a better 🌎❤️ pic.twitter.com/w3AXPtbEIe

What’s particularly interesting about Proctor’s choice, of course, is that it isn’t a Tesla, since Elon Musk is the founder and CEO of both that EV automaker and SpaceX, but she had an explanation for that as well. “Tesla is a great company and I LOVE SpaceX,” Proctor said in another tweet. “But there were many factors to my decision. A year ago I was divorced, broke, and living with my brother. What a difference a year can make! I’m full of gratitude for my first EV and I believe we are stronger working together toward a better world.”