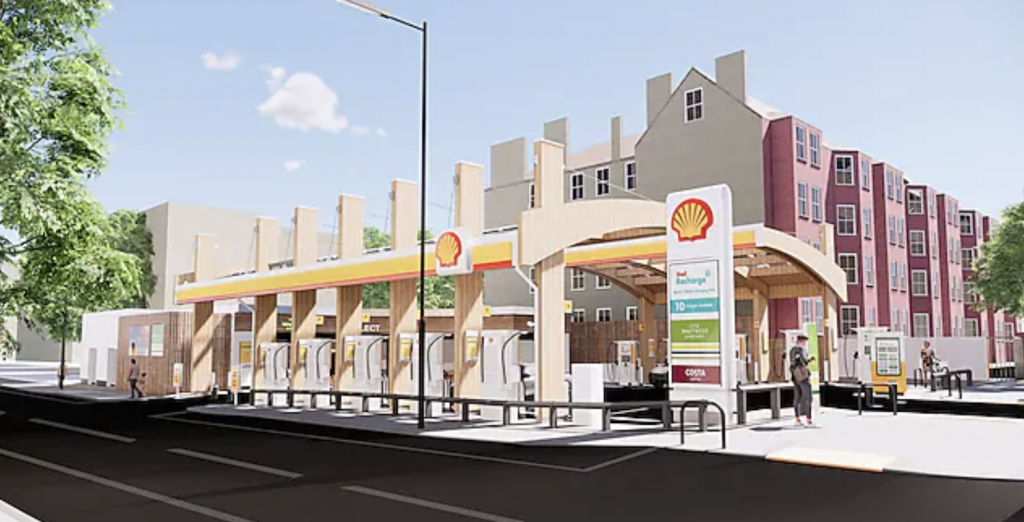 Europe, in general, is on the fast track to EV adoption, and that includes the UK, where a recent study found that many citizens are planning to buy an electric vehicle soon. As that country aims to ban even heavy-duty diesel trucks in the coming years in favor of zero-emissions vehicles, some early adopters have taken to hypermiling and setting new records in the Ford Mustang Mach-E. However, this widespread EV adoption means that far more charging infrastructure will be needed, which is why Ford and BP are both vastly expanding existing charging networks. Now, one of BP’s biggest rivals is entering that fray as well, as the very first Shell Recharge Station has opened in the UK.

The new Shell Recharge Station is located in Fulham, London, which the company has converted from a gasoline and diesel station into a modernized facility with ultra-rapid charge points. This is the very first existing gas station that Shell has converted into a charging station, serving as a global pilot designed to serve nothing but electrified vehicles with nine high-powered, ultra-rapid 175 kW charge points capable of charging most vehicles up to 80 percent in around 30 minutes, according to Shell. The station also supports a number of existing electrified FoMoCo vehicles, including Ford Kuga PHEV, Ford Explorer PHEV, and Ford Mustang Mach-E.

A full 30 minutes is still a decent amount of time to “refuel,” however, which is also why Shell has outfitted its Fulham station with a waiting area, a Costa Coffee store, and a Little Waitrose & Partners shop to help kill some time. The facility is also fitted with solar panels in the roof that provide around 25 percent of the electricity utilized at the site, while all the chargers run on 100 percent certified renewable electricity.

Additionally, the new Shell Recharge Station is constructed from sustainable and energy-saving materials, including a wooden canopy that used much less energy to produce and transport than steel, as well as double-pane windows and extra-heavy insulation in the walls.

We’ll have more on this EV station expansion soon, so be sure and subscribe to Ford Authority for 24/7 Ford news coverage.