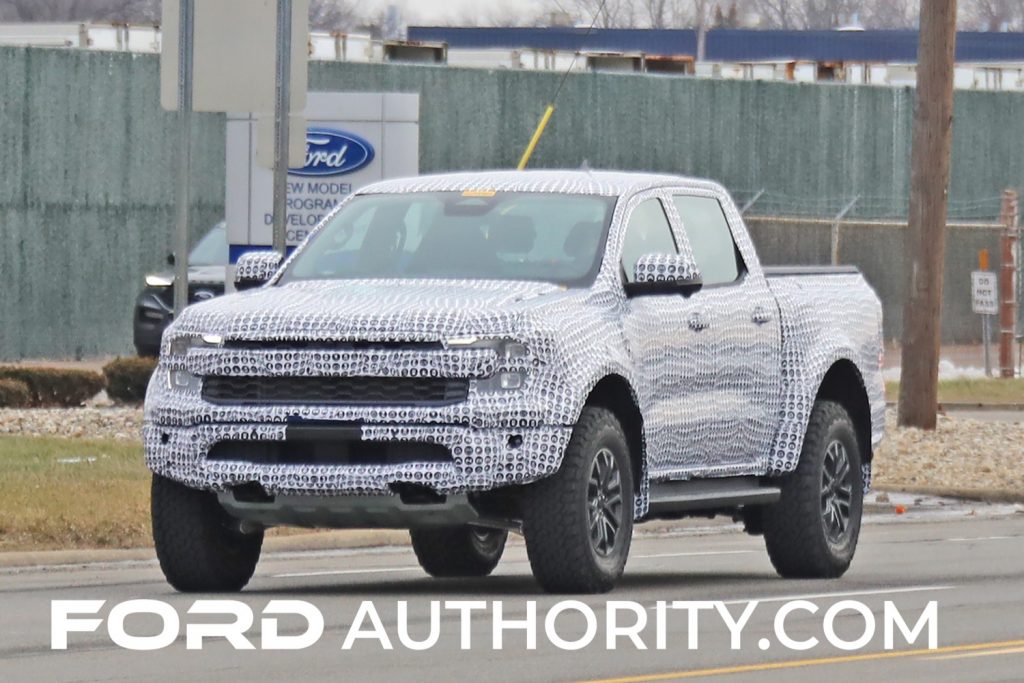 Just yesterday, Ford Authority exclusively reported on some new details regarding the forthcoming 2023 Ford Ranger Raptor, which will mark the high-performance off-roader’s debut in the U.S. when it launches there next year. Many of those details pertained to the 2023 Ranger Raptor’s interior, which have now been confirmed by these photos of a prototype obtained by Ford Authority spies. 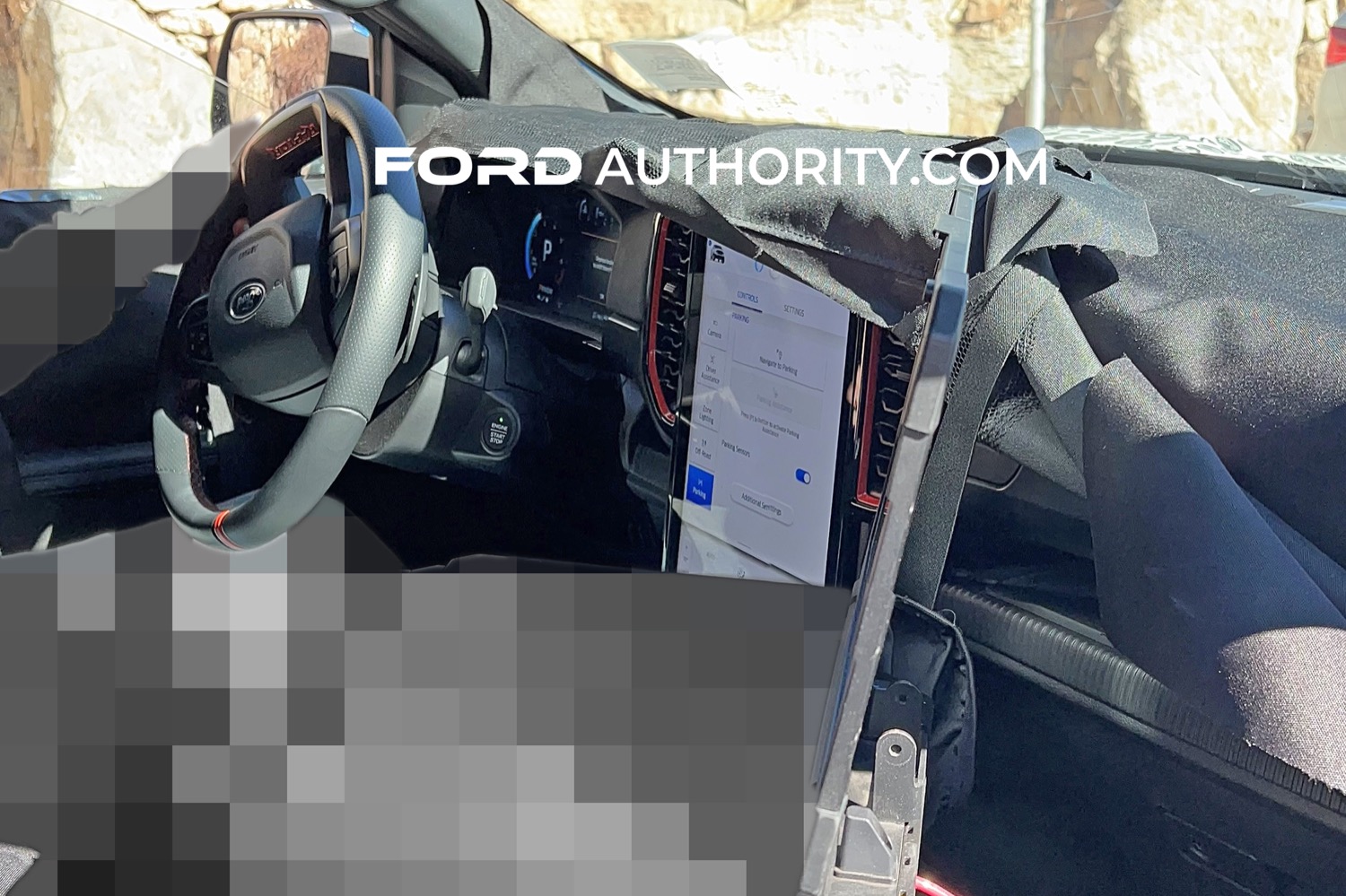 As Ford Authority previously reported, the 2023 Ford Ranger Raptor comes equipped with a large, vertical infotainment screen, which is the bigger of the two available in the already-revealed international market 2023 Ranger. The screen is bookended by a pair of HVAC vents, which feature Code Red accents that also adorn the stitching on the inside of the wheel, 12-inch marker, and “Raptor” logo present on the bottom of the wheel. 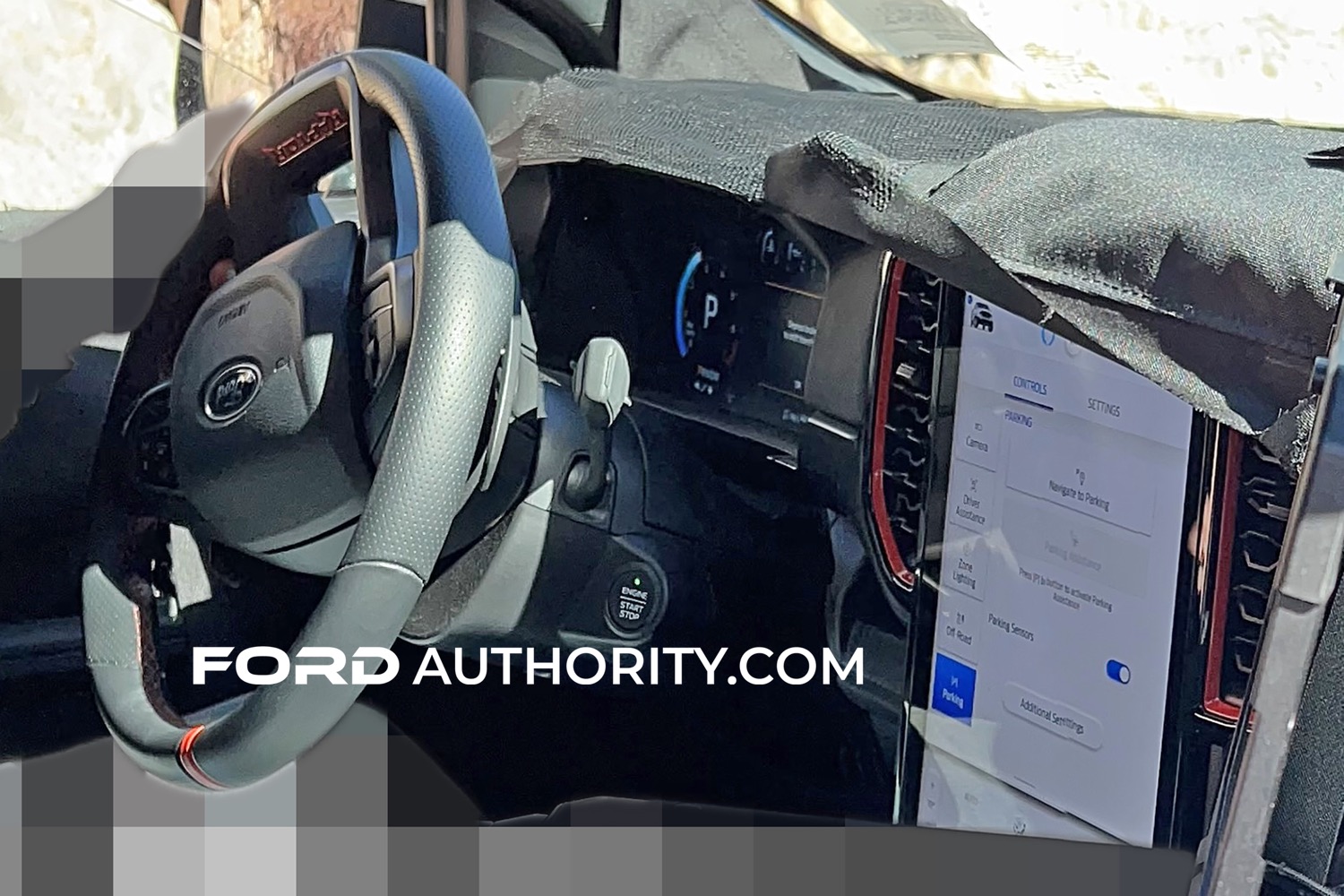 This configuration is similar to that present in the recently revealed 2022 Ford Bronco Raptor, while additional Code Orange accents will also adorn the cabin. A set of auxiliary switchbanks will reside within the overhead center console as well, though those are not visible in this photo.

The large infotainment screen is joined by a digital gauge cluster, which is standard equipment in all international market 2023 Ranger models, as Ford Authority recently reported. In front of it are a pair of paddle shifters, much like what’s found in the Bronco Raptor, which gives the driver a bit more control over FoMoCo’s 10-speed automatic transmission. As Ford Authority was the first to report, that gearbox will be mated to Ford’s 3.0L EcoBoost V6, just like its Ford T6 platform-mate, the Bronco Raptor. 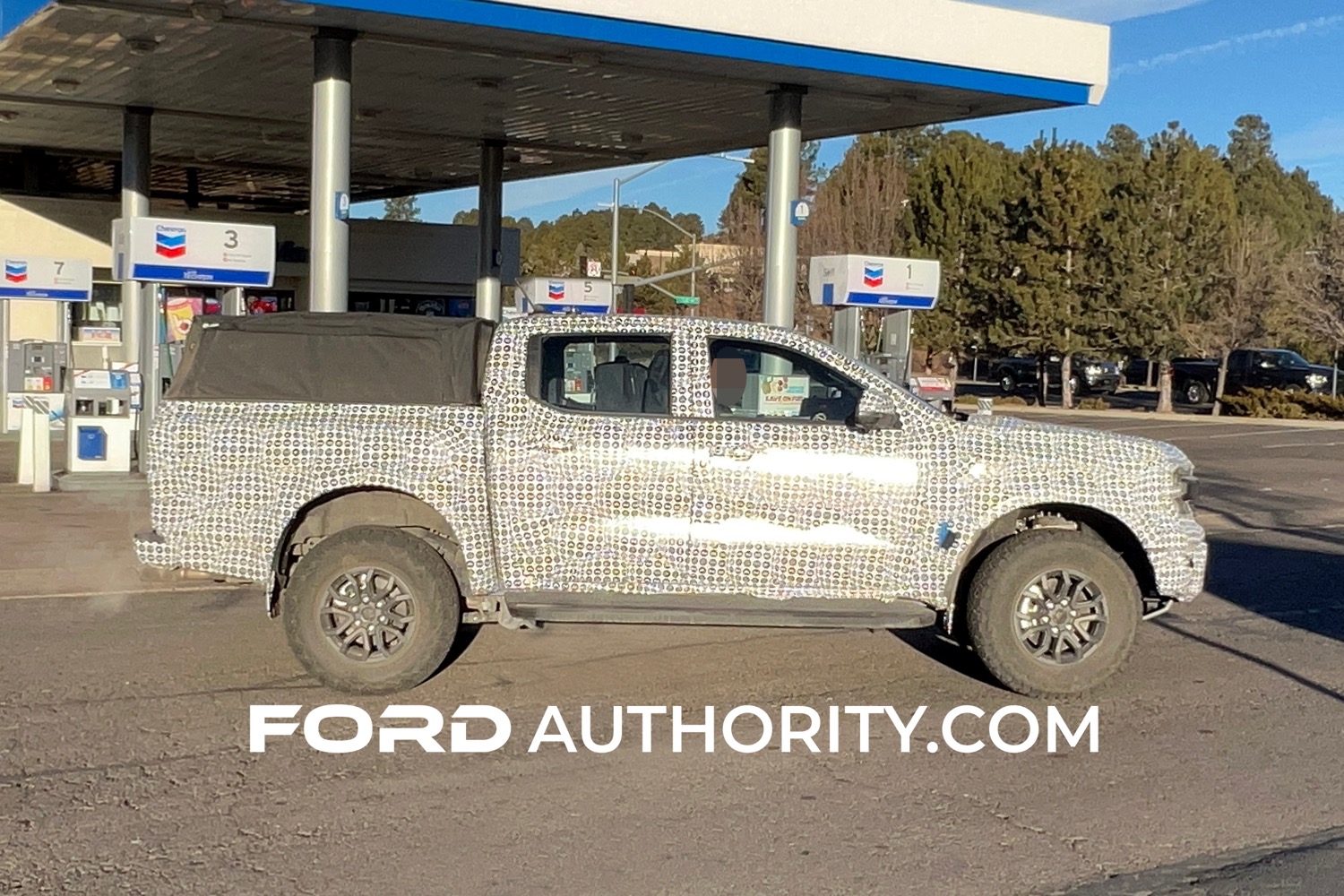 On the outside, the 2023 Ranger Raptor will sport a number of unique styling cues, including a “Ford” script grille neatly integrated within the Ranger’s new C-clamp headlight design. Other noteworthy elements will include a set of unique wheels with a black finish wrapped in beefy BFGoodrich tires, a high-clearance rear bumper with dual exhaust integrated into the corners, and beefy skid plates to protect the oily bits. The truck’s Center High Mounted Stop Lamp (CHMSL) will be integrated into the top part of the tailgate, just above the tailgate release handle. 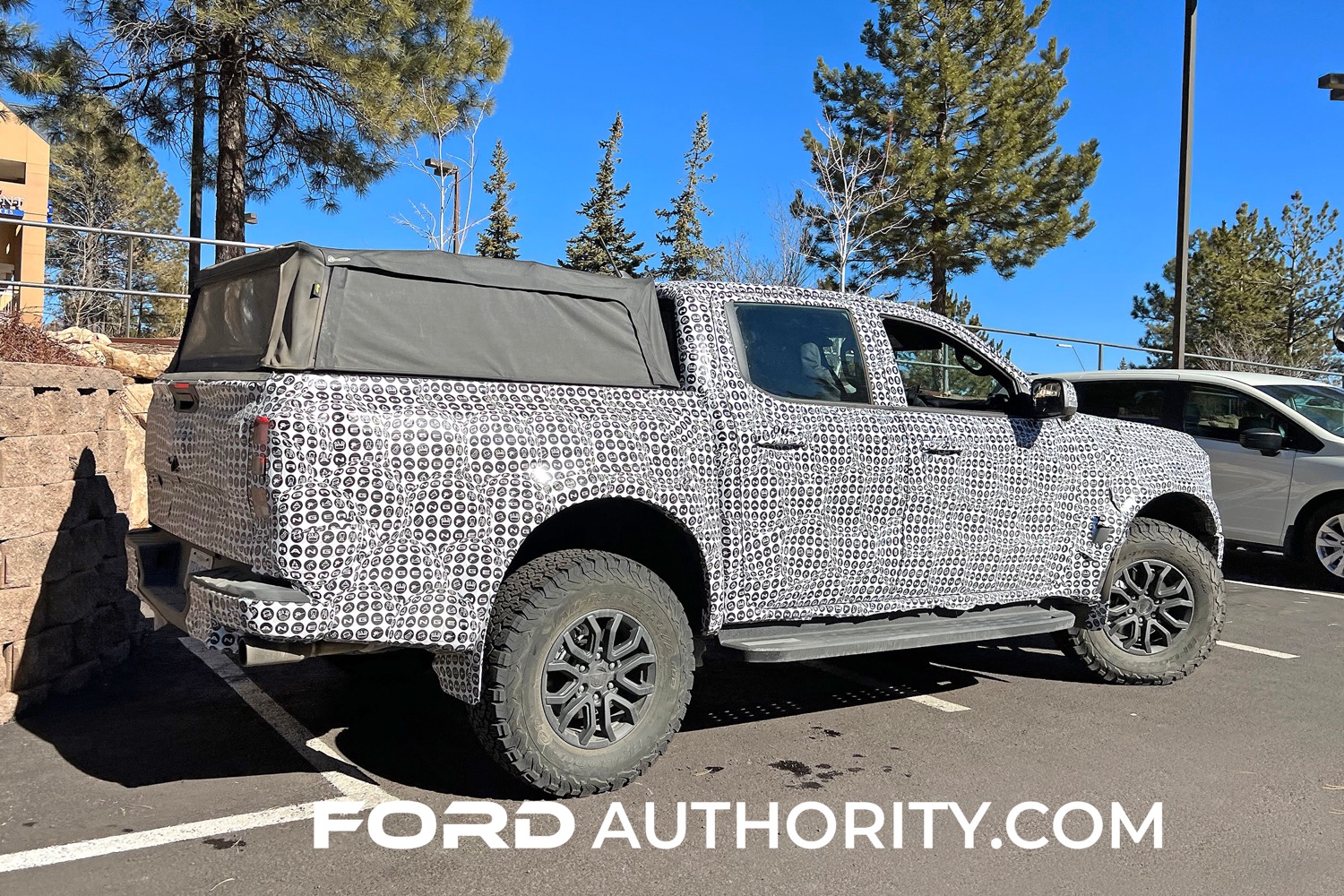 As Ford Authority exclusively reported last week, pricing for the next-gen Ranger Raptor will start out at $52,500 in the United States, which is significantly cheaper than the Ford F-150 Raptor and its $65k MSRP, as well as the Ford Bronco Raptor, which starts out at $69,995. 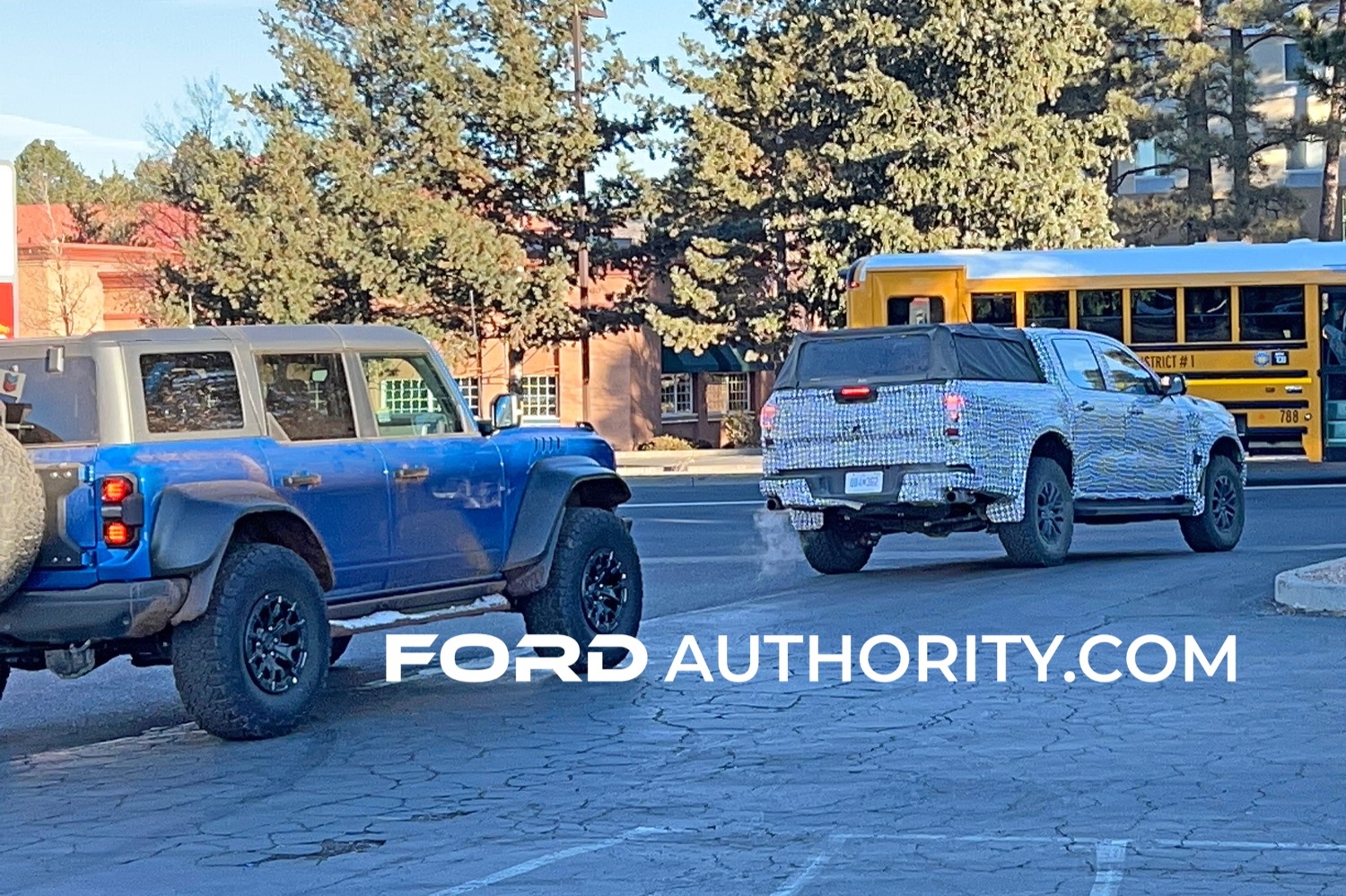 And, as Ford Authority exclusively reported last year, the next-generation Ford Ranger will represent the first of an eight-year production run. The new Ranger will enter production in Thailand and South Africa in 2022, and at the Ford Michigan Assembly Plant in the spring of 2023. 2023 Ranger order books are scheduled to open for European customers in late 2022, with the first deliveries expected in early 2023.

We’ll have more on the new Ranger Raptor very soon, so be sure and subscribe to Ford Authority for more Ford Ranger news and 24/7 Ford news coverage.