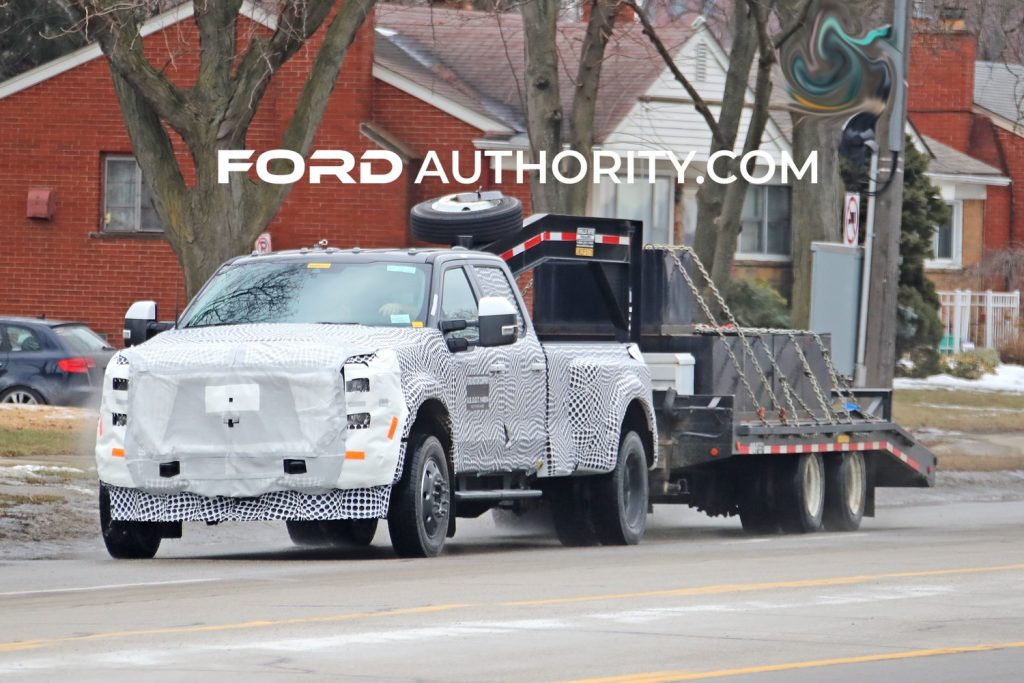 The Ford Super Duty received a refresh for the 2020 model year, followed by a number of changes for the 2022 model year ahead of a more comprehensive redesign set for 2023. Over the past several months, Ford Authority spies have spotted a number of 2023 Ford Super Duty prototypes out testing, including an F-350 Chassis Cab, a SuperCab with a standard-sized bed, a Platinum-trimmed pickup, a Crew Cab dually, an XL model that gave us our first look at the truck’s new interior design, and a 2023 Ford F-450 regular cab prototype that was recently spied for a second time. Now, Ford Authority spies have spotted a 2023 Ford F-450 dually prototype towing a gooseneck trailer that is slightly different from those previously-spied pickups. 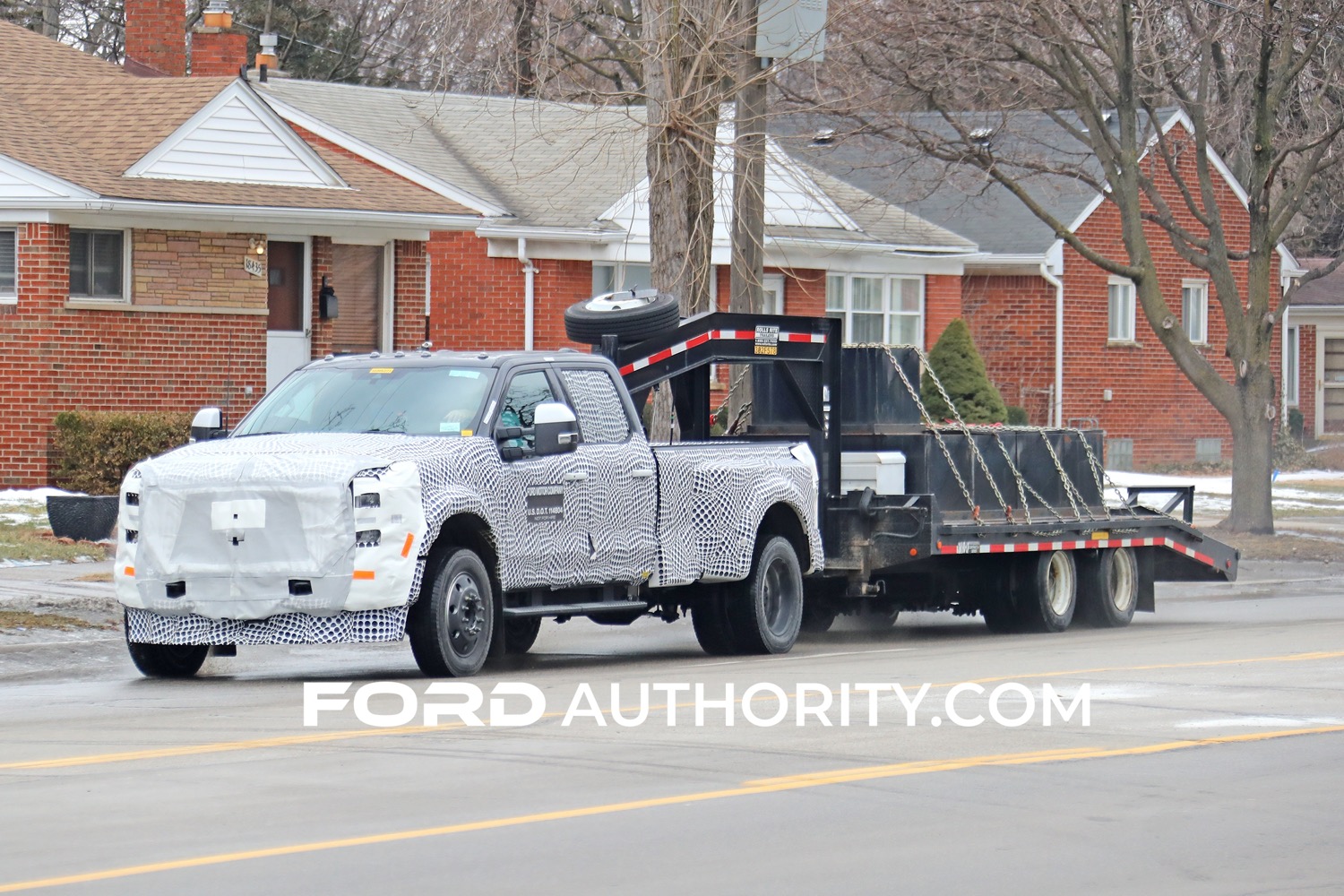 This particular 2023 Ford F-450 is wearing wheels fitted with 10 lug nuts, as opposed to the similar, previously-spotted prototype, which had eight lug nuts. Otherwise, it shares a lot in common with the other 2023 Super Duty prototypes we’ve seen thus far, meaning that it’s wearing heavy camo that conceals any potential styling updates present on the exterior. 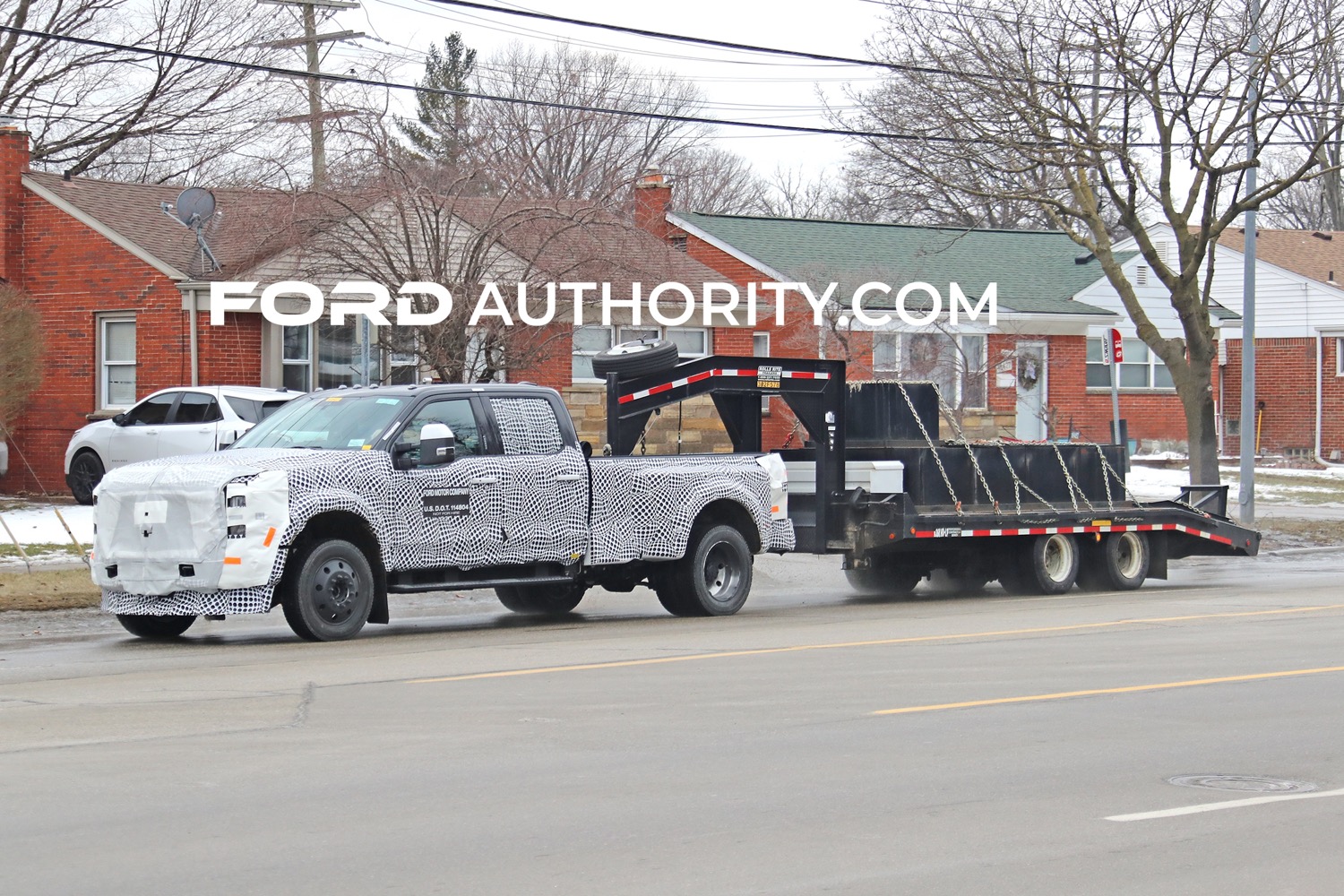 This prototype retains the familiar overall shape of the current-gen Super Duty, however, which makes it instantly recognizable, even under layers of thick camo. The front end is completely covered up, with the grille and headlights barely visible, meaning that the front fascia is very likely in line for some updates. 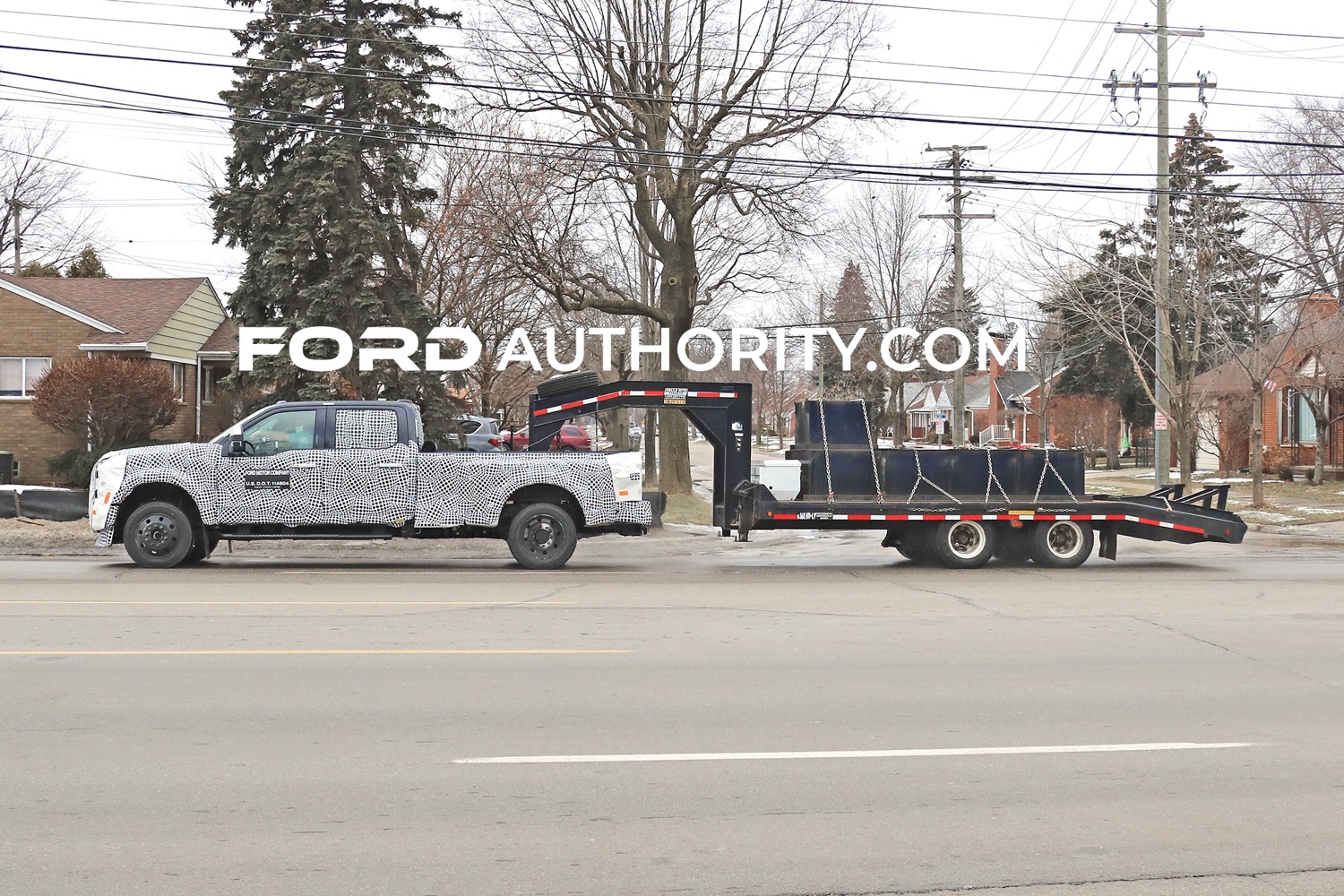 Moving down the sides, this prototype has the F-450’s familiar wide fender flares both in the front and in the rear, while the Ford F-Series styling line located at the top of the door is also present and accounted for. Out back, we see more of the same heavy camo covering the tailgate and taillights that is present up front, concealing any potential changes there as well. 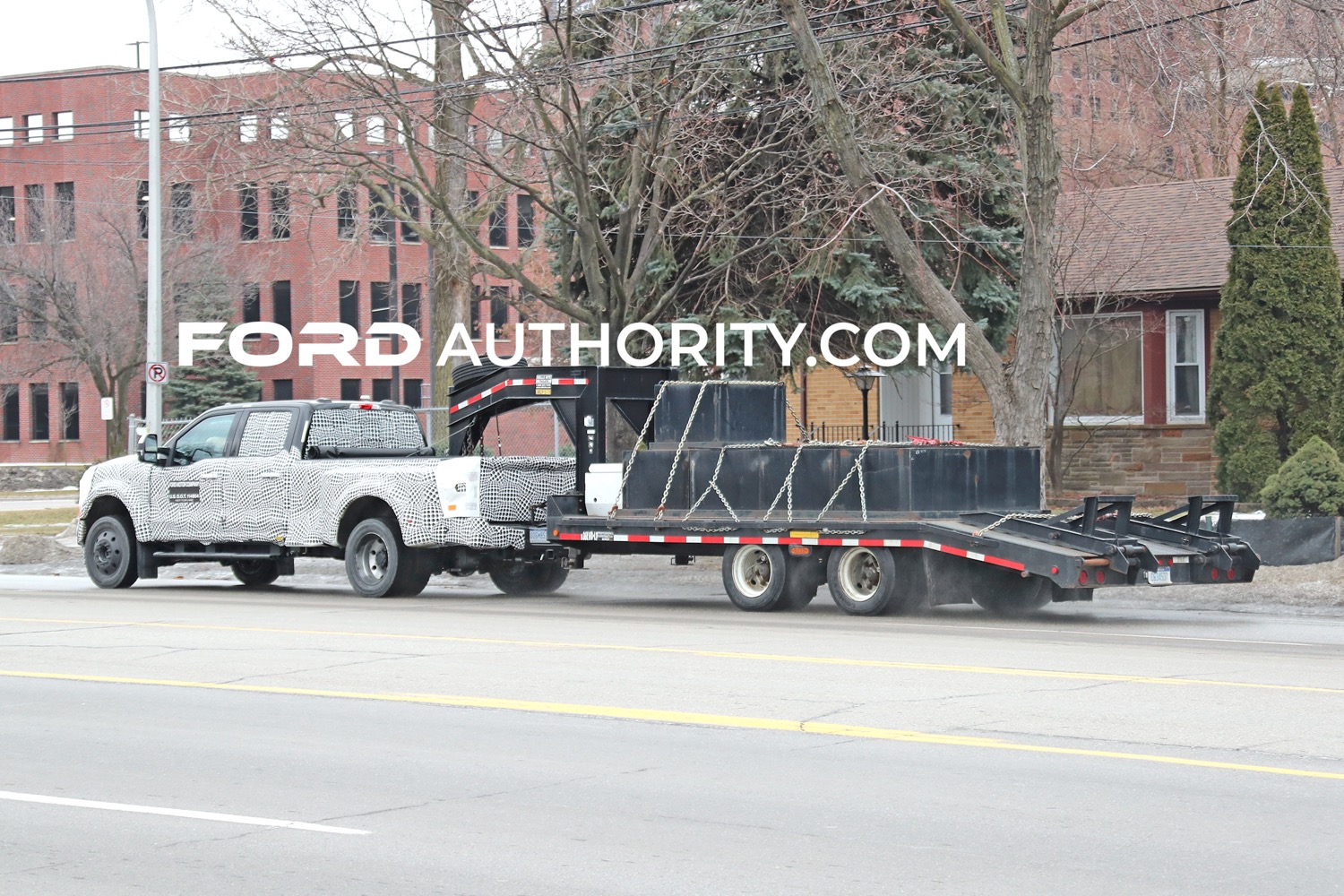 On the inside, the 2023 Super Duty will feature a design that’s similar to the redesigned 2021 Ford F-150. That means a new steering wheel, gauge cluster, and likely larger infotainment screens, as well as the addition of SYNC 4. It’s also possible the 2023 Super Duty will introduce Ford’s BlueCruise highway self-driving feature to the model, as Ford Authority spies spotted a pair of Super Duty trucks driving around wearing AV (autonomous vehicle) hardware, used for hands-free driving technology, back in June. 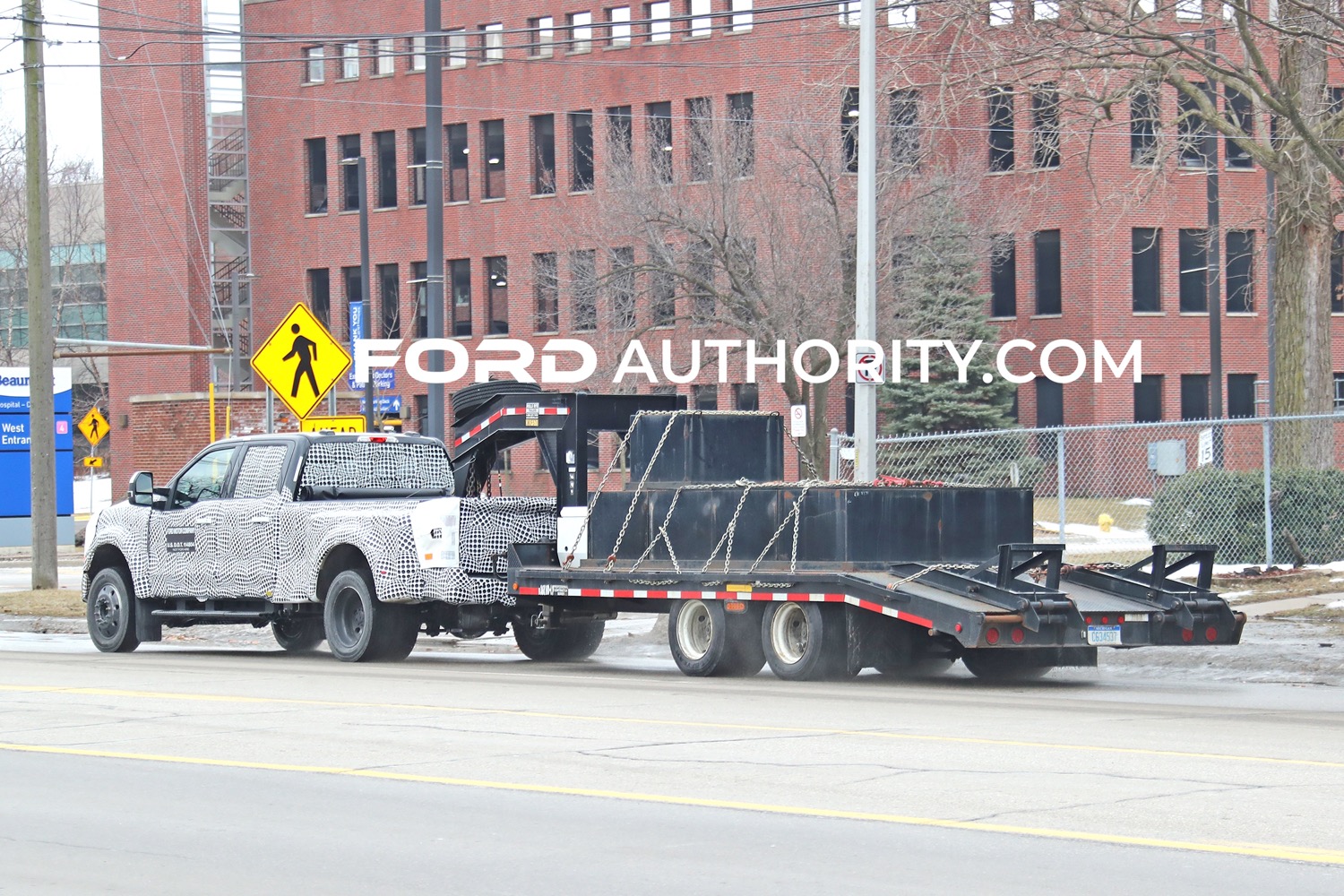 In the meantime, the 2022 Super Duty has introduced a handful of changes for the new model year, including the addition of a spray-in bedliner removal option, while both King Ranch and Platinum trims now come standard with four-wheel drive, and Ford deleted the underhood service light from all models. The 2022 Super Duty XLT is now no longer available with the Tremor Off-Road Package, while the truck’s tailgate release operation was recently changed following a recall.

We’ll have much more on the 2023 Super Duty soon, so be sure and subscribe to Ford Authority for the latest Ford F-Series news, Ford Super Duty news, and non-stop Ford news coverage.

This article was updated to reflect the fact that the prototype is towing a gooseneck trailer, not a fifth wheel.