Ford dealers have produced mixed results in a number of recent studies, including churning out an above-average finish in J.D. Power’s 2021 U.S. Sales Satisfaction Index Study and a below-average finish in the same organization’s 2022 U.S. Customer Service Index (CSI) Study. Now, Ford dealers have ranked rather poorly on the newly released 2022 Pied Piper PSI Internet Lead Effectiveness (ILE) Study as well, beating out one single brand – Fiat – while ranking behind the rest of the pack. 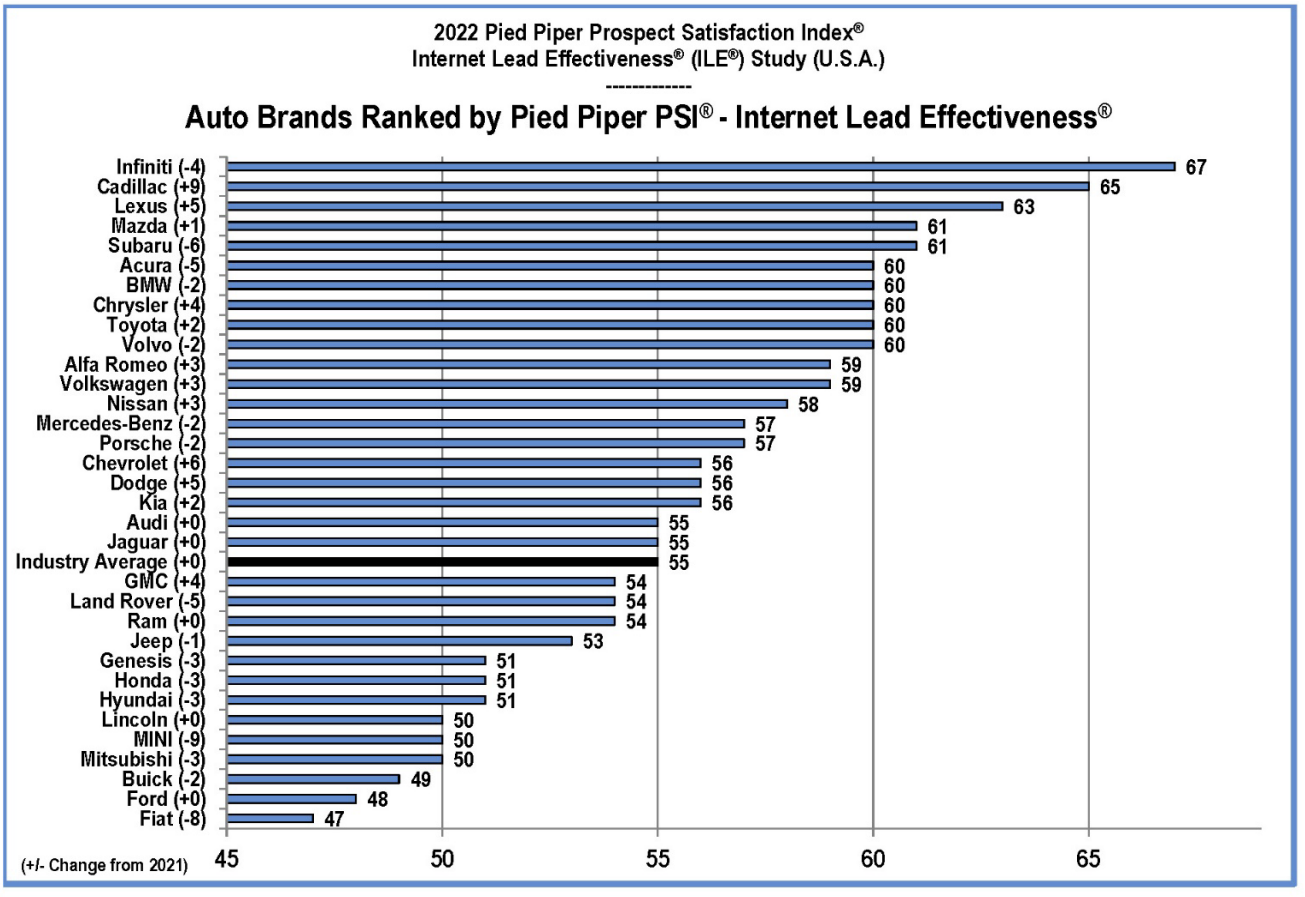 Pied Piper’s ILE Study – which has been conducted every year since 2011 – is a bit different than the aforementioned studies in that it measures a dealer’s responsiveness to Internet leads coming through dealership websites, which it considers a key requirement for retail success in today’s world. To determine the results of its latest study, the research company submitted mystery-shopper customer inquiries through 3,628 dealer websites asking specific questions about vehicles in inventory. Pied Piper then evaluated how the dealerships responded by email, telephone, and text message over the following 24 hours.

In total, 20 different metrics are used to calculate a dealer’s Internet Lead Effectiveness Score, with a perfect score coming in at 100. In that regard, Ford dealers suffered one of the largest year-over-year declines of any brand, landing near the bottom of the pack with an ILE score of 48. Infiniti led the way with a score of 67, while all of FoMoCo’s chief competitors fared much better than The Blue Oval in this regard.

“Most dealers had less inventory in 2021, but dealer treatment of sales prospects was still critical, as it determines not only sales today but also the dealership’s success tomorrow,” said Fran O’Hagan, CEO of Pied Piper. “Dealers who respond quickly, personally, and completely to website customer inquiries on average sell 50 percent more vehicles to the same quantity of website customers as opposed to dealers who fail to respond.”

Meanwhile, Ford dealers will be undergoing some major changes in the coming months and years, as the automaker has asked each to specialize in ICE-powered vehicles, EVs, or Ford Pro commercial offerings, though EVs will likely have to be sold at fixed prices via special showrooms, while dealers that turn inventory quickly will be financially rewarded.