While the American and European versions of the S550 Ford Mustang are virtually identical in most every way, there is one big difference that makes it easy to tell the two apart (at least until the 2022 model year) – the European Mustang features clear taillamps, while the American version’s are red. However, many enthusiasts dig the clear look, and the aftermarket has obliged by offering that particular upgrade from a variety of companies. Now, however, this new Ford Mustang clear taillamp kit is available directly from The Blue Oval itself, most likely for the very first time. 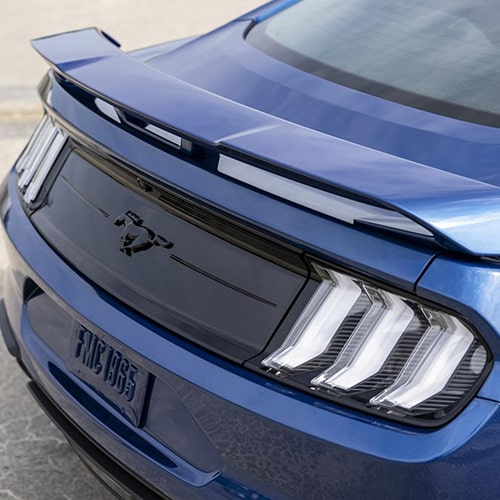 The new Ford Mustang clear taillamp kit fits all 2018-2022 models and is available to purchase from the Ford Performance catalog under part number M-13504-MC with a retail price of $795. While these clear taillamps come equipped on the new-for-2022 Mustang Ice White Appearance and Stealth Packages, this kit allows anyone who owns any other version of the iconic pony car to achieve the same look as their European counterparts. The kit includes both taillamps and is reportedly easy to install using the factory electrical connections, too.

In addition to this new clear taillamp kit, Ford has also added a number of other new S550 Mustang parts and accessories to its growing catalog in recent months. Those include an extended wheel stud and nut kit for 2015-2022 Mustang, Mustang GT, and GT350 models, as well as the 2017-2020 GT350R, along with the S550 Ford Mustang PP1 rear spoiler and 2018-2021 Ford Mustang Shelby GT350R steering wheel.

We’ll have more new parts and accessories to share soon, so be sure and subscribe to Ford Authority for more Ford Mustang news and non-stop Ford news coverage.