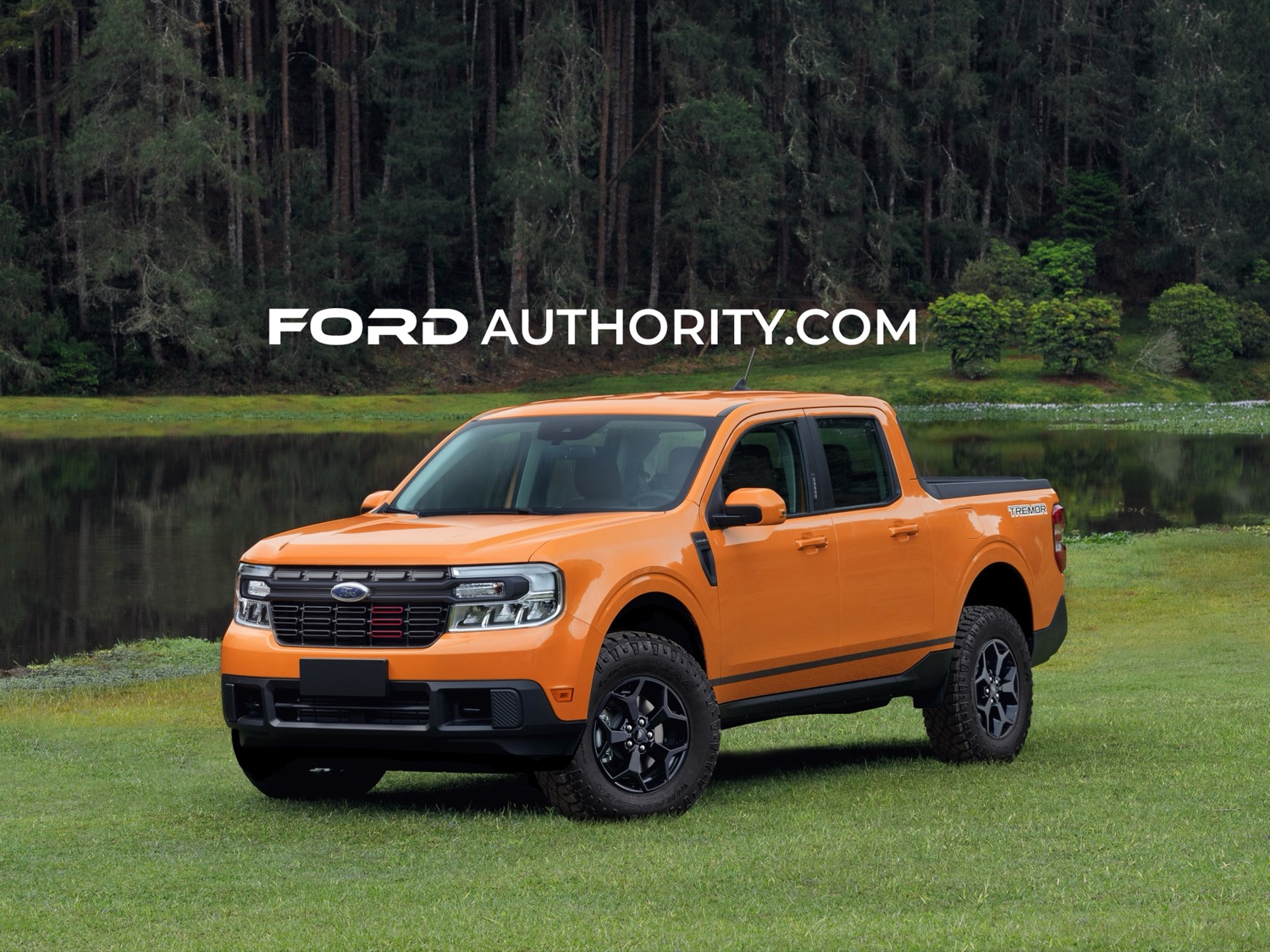 Back in February 2021, Ford Authority exclusively reported that the Ford Maverick pickup will offer an off-road-oriented trim. At that time, it was unclear what, exactly, this trim would be called, though we speculated that it could bear the Timberline name like the Ford Explorer and Ford Expedition Timberline. In August 2021, Ford Authority reported that FoMoCo isn’t ruling out a street performance-oriented or off-road-focused variant of the new Maverick pickup. Then, in December 2021, Ford Authority reported that Ford filed to trademark Maverick Tremor in Chile, indicating that this off-road-focused Maverick variant could follow the lead of the Ford Ranger Tremor, Ford F-150 Tremor, and Ford Super Duty Tremor. Thus, we decided to create some renderings depicting what a Ford Maverick Tremor might look like. 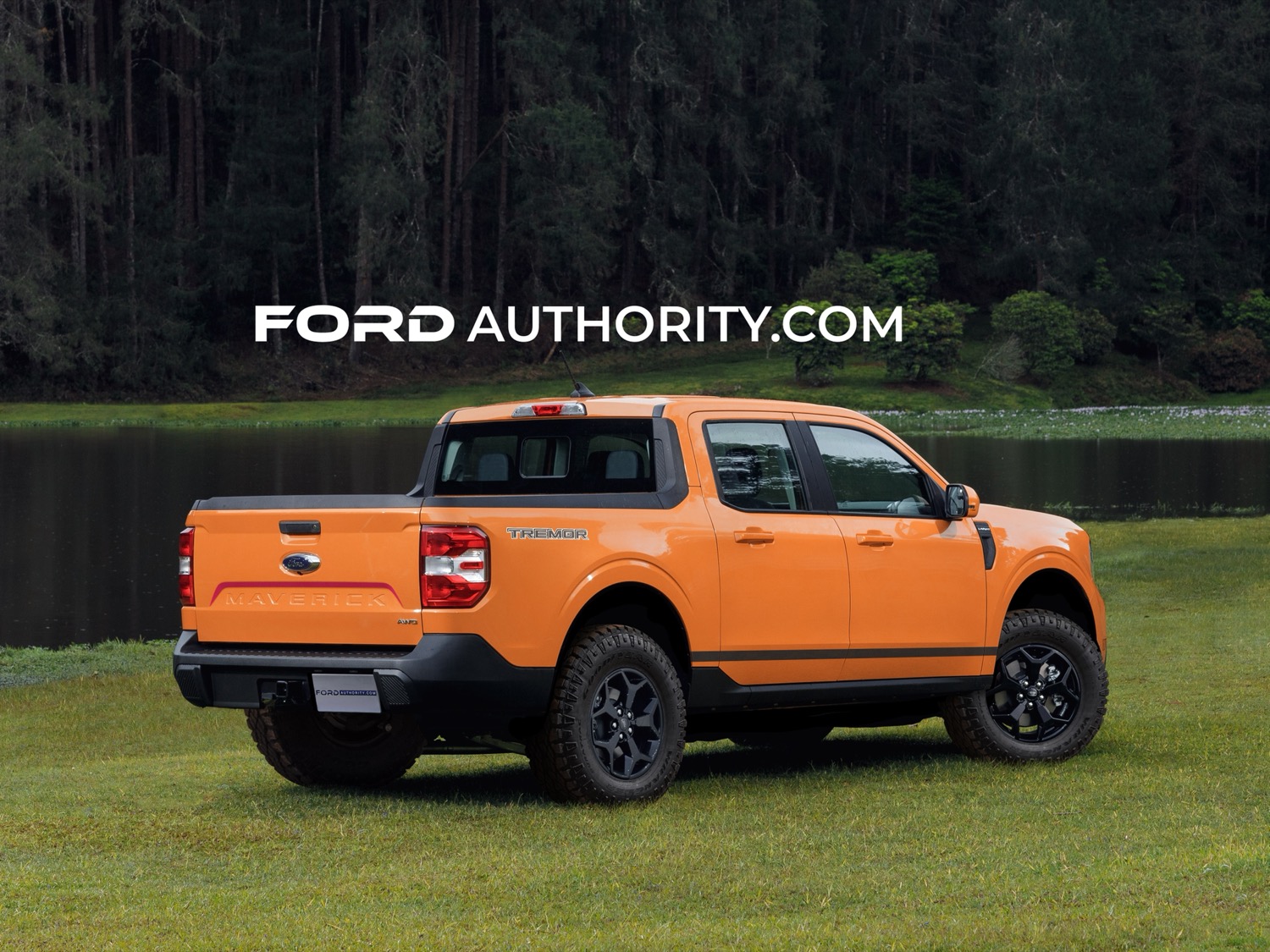 As is the case with Ford’s other Tremor pickups, our theoretical Ford Maverick Tremor features a lifted suspension, unique wheels, and larger, more aggressive tires than what’s currently available on any Maverick, including pickups equipped with the optional FX4 Off-Road Package. The pickup also features a high-approach front fascia that improves approach angle, which makes it more capable off the pavement.

Other exterior enhancements include orange accents in the front grille – a feature found on other Tremor models – as well as “Tremor” badging on the top rear portions of the bedsides. Finished in a bright orange hue, our theoretical Ford Maverick Tremor bears a more aggressive appearance overall, befitting of its added capability. 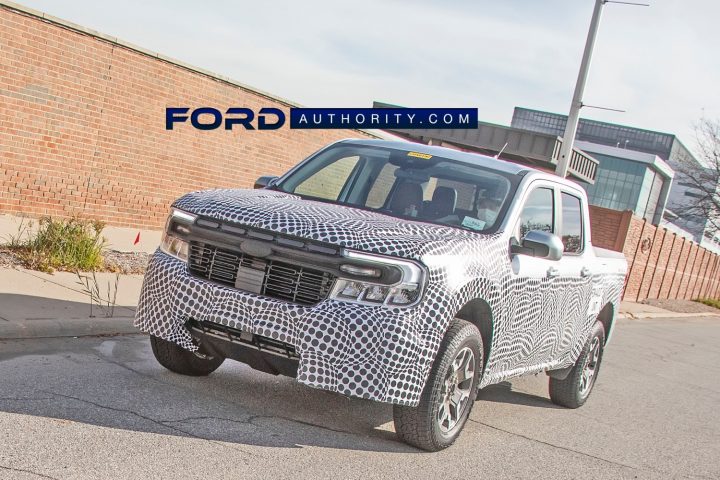 In November 2021, Ford Authority spies spotted a unique Maverick prototype out driving around wearing a more aggressive front fascia with black grille center bars and a blacked-out Blue Oval. The center portion of the front bumper was completely different as well and was open at the bottom with a gloss black plastic piece present that could possibly serve as a stand-in for a production bash or skid plate. That particular prototype was also equipped with the FX4 Package and its beefier tires.

It would certainly make a lot of sense for Ford to add a more off-road-focused Maverick Tremor to the lineup, considering the popularity similar vehicles enjoy these days. It would also add some continuity to The Blue Oval’s truck lineup, as the Maverick is currently the only Ford pickup that isn’t available in Tremor form. Whether or not that actually happens is currently unclear, but it certainly wouldn’t come as a surprise.

We’ll have more on the Ford Maverick Tremor soon, so be sure and subscribe to Ford Authority for more Ford Maverick news and around-the-clock Ford news coverage.