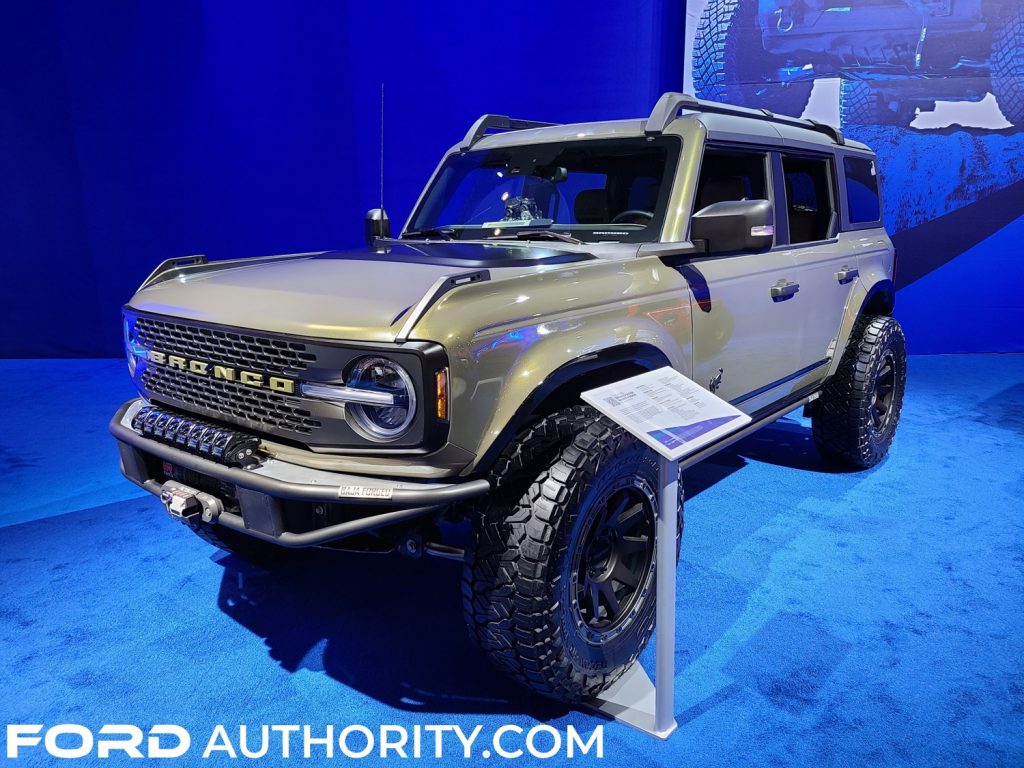 As one of the hottest, most commonly modified vehicles on the planet, it’s no surprise that there were a slew of custom 2021 Ford Bronco builds present at last year’s SEMA Show in Las Vegas, where it was crowned the 2021 4×4/SUV of the Year. That eclectic mix included a build from Tucci Hot Rods that features tracks instead of wheels and tires, a two-door Badlands from RTR, and a pickup version of the Ford Bronco built by the folks at BDS Suspension. However, Baja Forged also brought its very cool 2021 Ford Bronco Outer Banks to Sin City, where we here at Ford Authority were able to get an up close look at the flashy build. 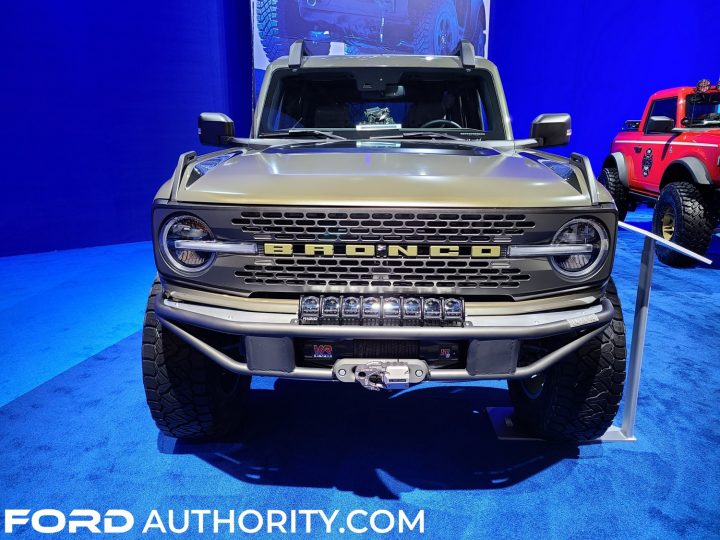 Baja Forged’s 2021 Ford Bronco Outer Banks was built by LGE-CTS Motorsports, and is officially known as the Baja Sur Edition Ford Bronco – a tribute to its intended use as a highly-capable desert blaster. On the outside, that process began by adding a ton of off-road lighting including Rigid’s Ford Performance underbody light kit, Adapt 20-inch light bar, and a Chase rear-facing light bar. 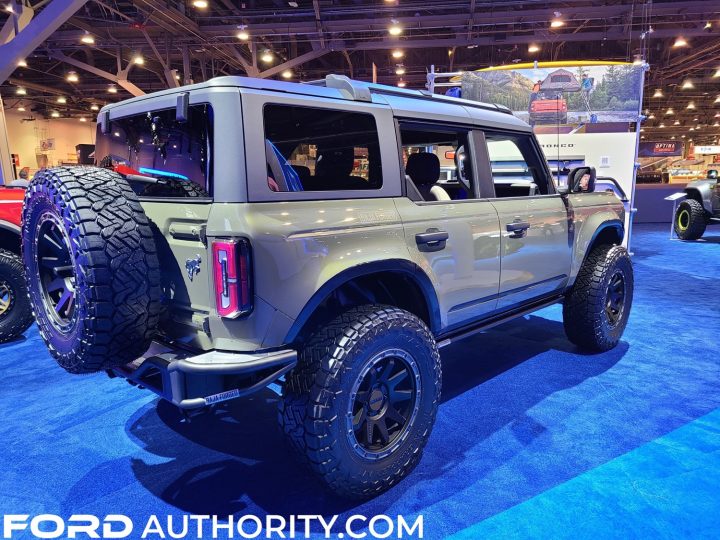 From there, LGE-CTS blessed this Bronco with a Warn VR Evo 10-S winch up front, along with a Factor 55 Ultra hook with a Hawse fairlead, Baja Forged tubular front and rear bumpers, a fender and quarter panel kit from Advanced Fiberglass Concepts, and custom paint provided by PPG Industries. The ultra-wide fenders help make room for a set of 20×9-inch Method Race MR317 bronze wheels with black accents, which are wrapped with 37-inch Nitto Recon Grappler tires. 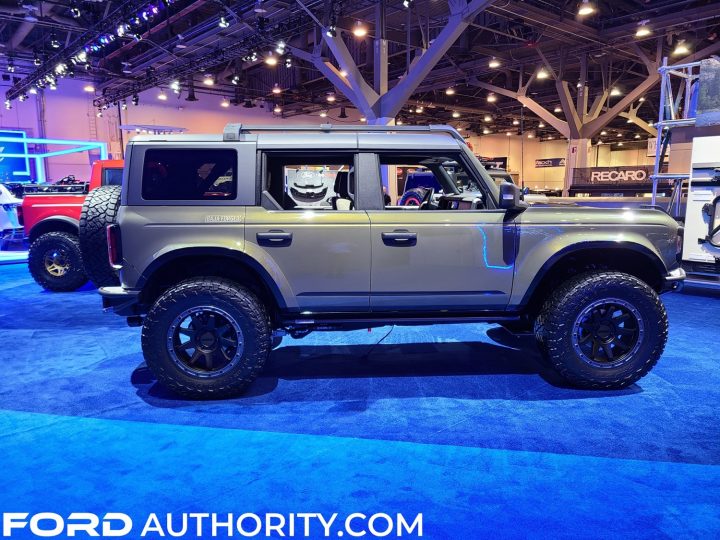 Underneath, the Baja Sur Edition Bronco features an Icon Vehicle Dynamics’ 3.0 suspension system with tubular upper control arms and billet trailing arms, while performance and sound from the turbocharged Ford 2.3L I-4 EcoBoost powerplant receive a boost from a Ford Performance/Borla cat-back exhaust and an Injen Evolution air intake with a SuperNano web dry filter. 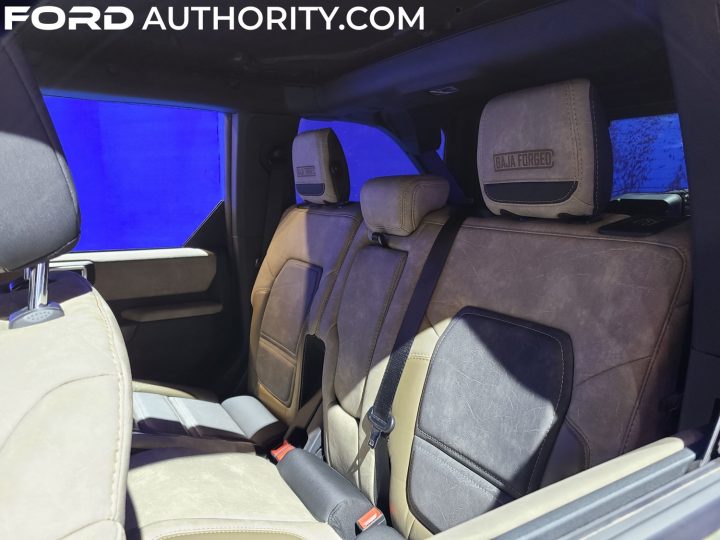 For the finishing touches on this unique Bronco, LGE-LTE fitted the SUV with a host of Ford Accessories including all-weather floor mats, an under-floor safe, a tailgate folding table, cargo area protector, cargo organizer, portable fridge/freezer, and hardtop storage bags, along with a custom leather interior, painted accents, and a Pelican case.

The result is one seriously cool custom build deserving of the bright lights at SEMA, though the Baja Sur Edition obviously had its fair share of competition at last year’s show. 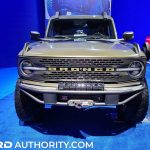 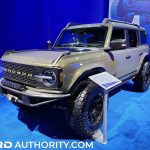 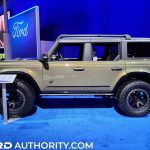 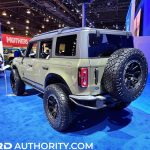 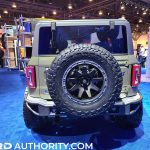 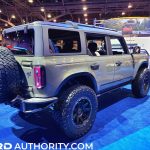 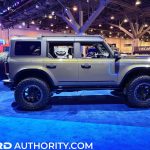 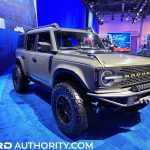 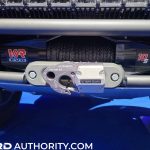 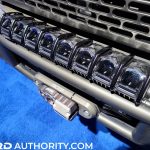 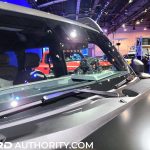 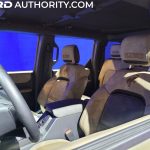 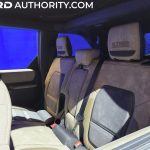