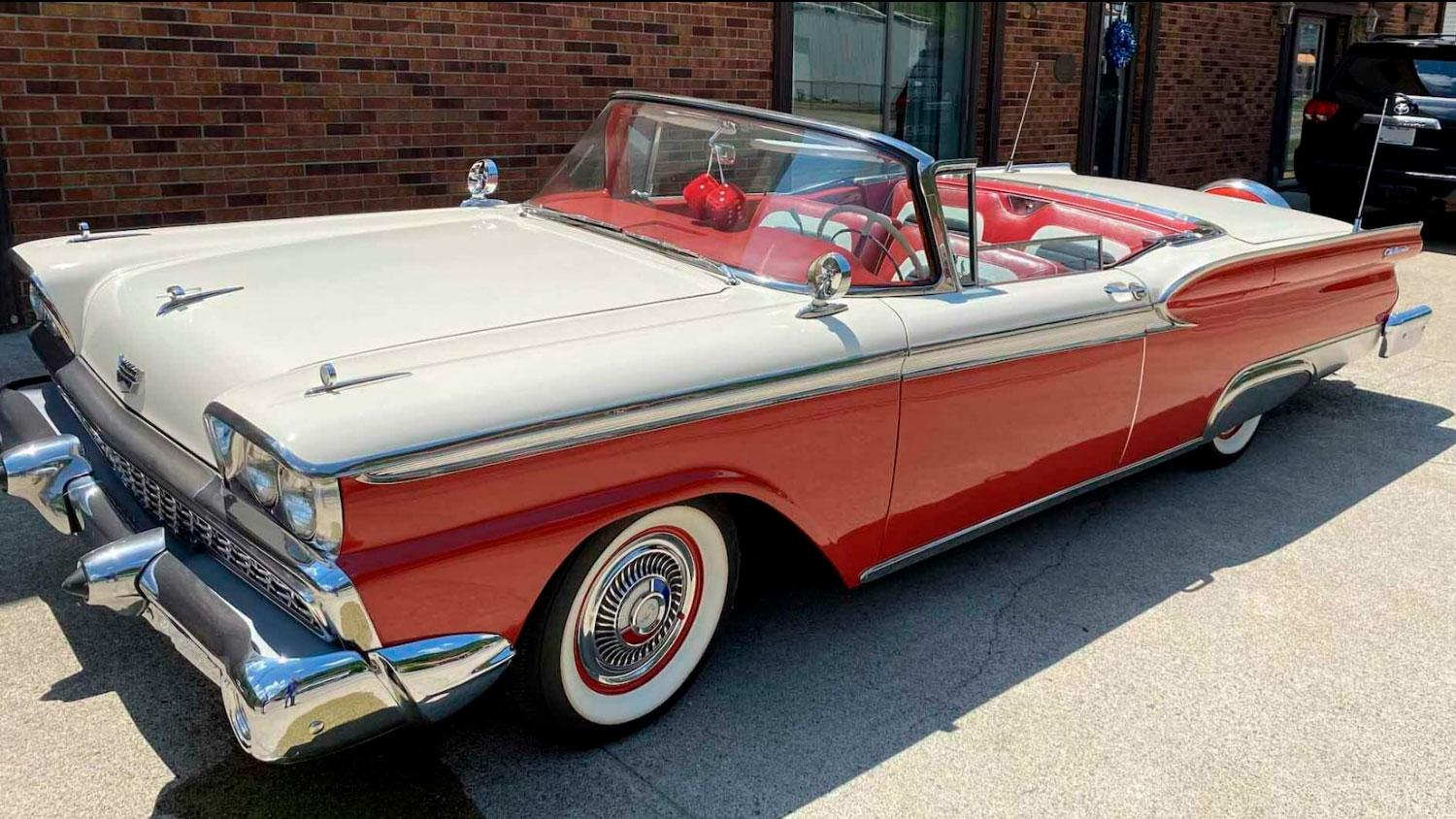 The Ford Skyliner was part of The Blue Oval’s lineup for just three years, but in that brief time it became one of the company’s most iconic offerings. Produced from 1957 to 1959, the Skyliner was a retractable hardtop that – through a dance of automotive origami – folded the full-size roof into the extended trunk.

Debuting for the 1957 model year, the Ford Skyliner was part of the Fairlane lineup for its first two years of production. For 1959, the Skyliner became part of the flagship Galaxie model line. 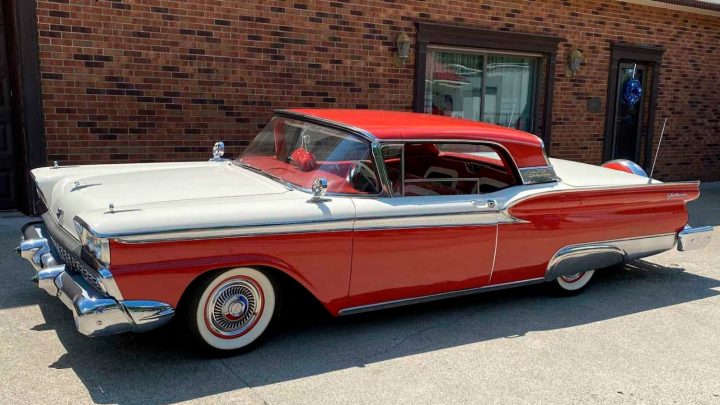 The “Hide-Away Hardtop” on the 1959 Ford Skyliner was the culmination of a complicated series of over six hundred feet of wiring, six reversible electric motors, ten limit switches, ten solenoids, six reversible electric motors, six total locking mechanisms (two for the trunk and four for the top), and a series of relays. When the top was retracted, it took up most of the massive trunk space. The center of the trunk was home to a small luggage bin where things could be stowed when the top was down. 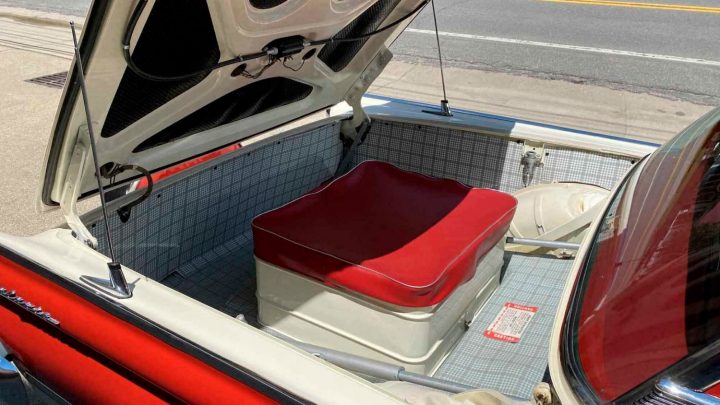 Our feature 1959 Ford Skyliner is finished in a handsome combination of Torch Red and Colonial White. The paint condition would suggest it is a recent respray, as it has great shine. The Skyliner is optioned with a Continental kit big enough for patio furniture, a grill, and a gathering of your closest friends. The chrome bumpers and trim appear to have been either re-plated or replaced, as there is no visible sign of pitting or patina. The stainless trim has been well polished. All glass appears to be in fine nick, and weatherstrip shows no apparent cracking. Painted steel wheels wear full polished hubcaps, and are shod in radial wide whites. The rear wheels are shrouded by polished trim that extends rearward to the Continental kit. 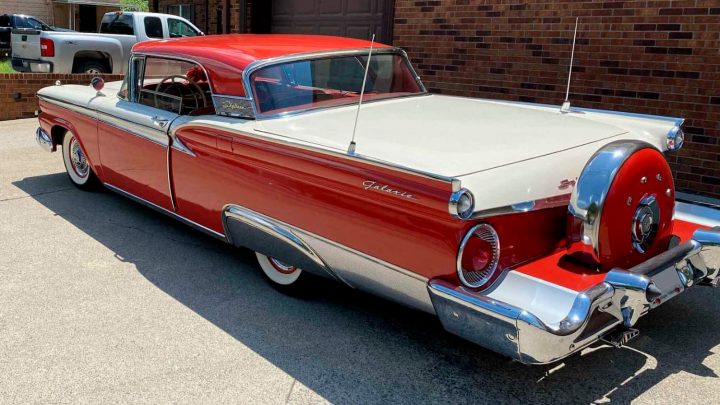 The Ford Skyliner sports a fresh tri-color interior scheme in red and white vinyl with charcoal gray cloth inserts. Door panels are trimmed in red and black vinyl with textured stainless elements. The dash is covered in a red vinyl dash pad, a polished stainless center section that is home to the gauges, radio, and clock, and a red painted lower section. The steering wheel is red and white with a chrome horn button and bar. An air conditioning unit is mounted beneath the center of the dash. This Skyliner is equipped with power windows, power seats, power steering, power brakes, and electric auto door and trunk opener. 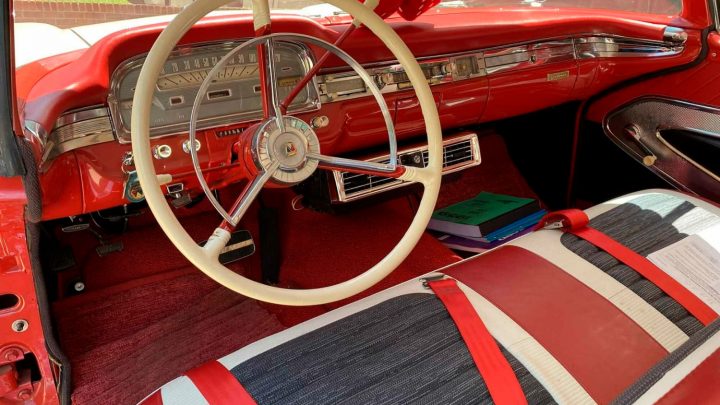 The engine compartment on the Ford Skyliner is home to the 352 cubic-inch Interceptor Special V8 that produces 300 horsepower. The Interceptor is backed by the three-speed Cruise-O-Matic automatic transmission. The engine bay appears to be well detailed and largely original, save for a modern A/C compressor. 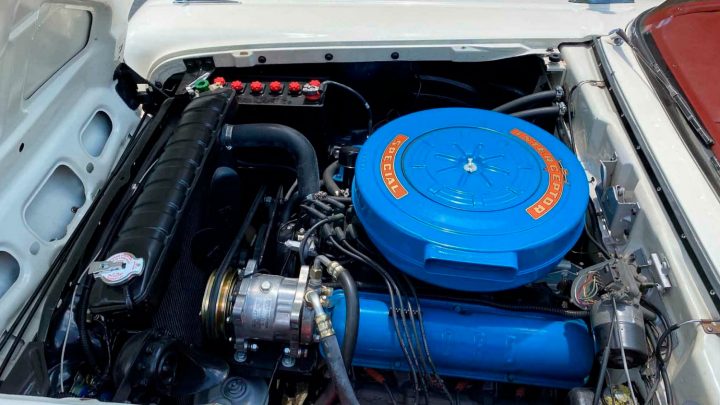 This attractive 1959 Ford Skyliner will cross the Mecum Auctions block in Orlando, Florida taking place July 6th through the 9th. 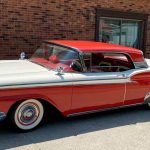 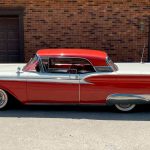 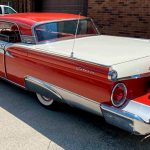 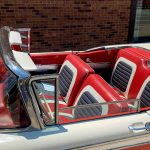 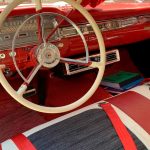 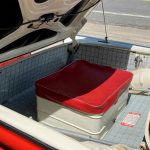 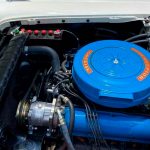