The 2023 Ford Bronco will arrive at dealerships later this year and will likely introduce some low key changes into the lineup. As Ford Authority previously reported, order banks for the upcoming model are currently expected to open up in August, with production ramping up in November. Thus far, it is unclear what exactly will change, but Bronco Nation recently revealed that at least one new color is getting added to the roster, and it should delight fans of the color blue, along with fans of vintage Bronco colors. 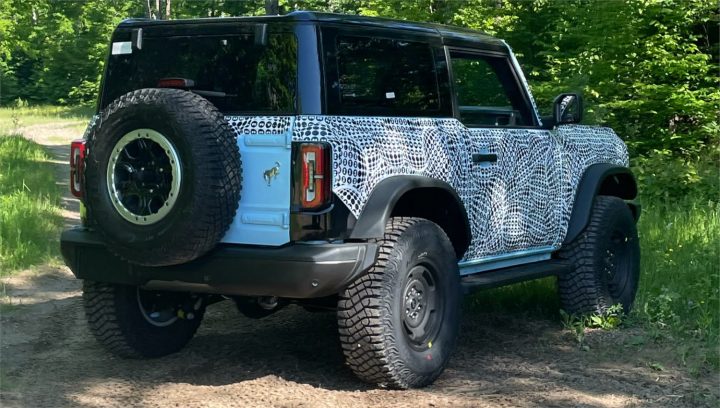 The 2023 Ford Bronco in question made an appearance at the Ford Bronco Everglades drive event, where many outlets came away impressed with its capability and water fording capability. In any event, the prototype notably boasts light blue paint, considerably lighter than Velocity Blue Metallic, which is currently the only other blue in the lineup. As Bronco Nation observed, the color appears to be a modern version of Wind Blue, a color the company offered on the 1972-1975 Ford Bronco. This prototype also appears to come equipped with a black painted hard top, although it is currently unclear if any such option will be introduced, especially given the recent struggles supplier Webasto faced with rolling out the roofs that are already incorporated into the lineup.

If the 2023 Ford Bronco revives the Wind Blue color, it would represent the second time a paint from the model’s past found its way back into the lineup. As Ford Authority previously reported, Eruption Green was added to the lineup for 2022, along with Hot Pepper Red, Desert Sand, and Code Orange, although the latter two options are only offered on Everglades and Raptor, respectively. Those additions counteracted the deletion of Antimatter Blue, Lightning Blue Metallic, and Rapid Red Metallic, which were only available for the 2021 model year.

We’ll have more on the Bronco soon, so subscribe to Ford Authority for the latest Ford Bronco news, and continuous Ford news coverage.