The 2023 Ford F-150 is likely only months away from being fully revealed, and while it may not bring any groundbreaking changes to the full-size pickup, it is a given that The Blue Oval is planning on introducing some new packages and models to supplement the current offerings throughout the lineup. As Ford Authority previously reported, an all-new Rattler package is slated to fill out the XL range as a budget option for off-road enthusiasts. On the completely opposite end of the spectrum will lie the Ford Raptor R, a range-topping muscle truck destined to pack tons of power and robust desert running capability. Now, a new leak heavily indicates Ford is planning on introducing another package into the model range as well. 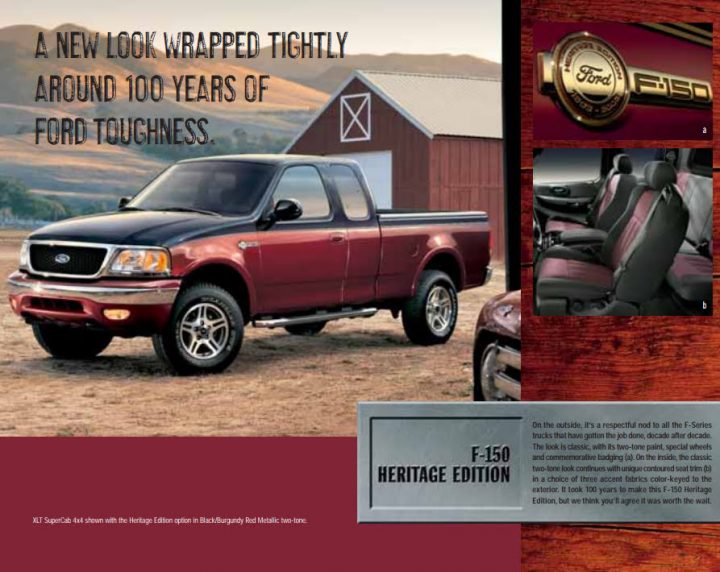 Several pictures of a purported 2023 Ford F-150 Heritage Edition were compiled into a video by The Raptor Connection, each showing off some elements of the upcoming package or model. The truck has a distinct two-tone paint job, with Cactus Gray serving as the base paint while the cab above the greenhouse is painted black, including the roof. Additionally, the rocker panels and front and rear bumpers appear to be painted black as well. The sole interior pic features a close up of what is presumably one of the front seats, which has “Ford F-Series Heritage Edition” embossed into the leather. This suggests more than one F-Series model may be receiving the package.

Interestingly enough, the timing of this package, if it is real, would make sense, as The Blue Oval offered an F-150 Heritage Edition for the 2003 model year. The automaker introduced the package to celebrate its 100th anniversary, although its two-tone exterior paint scheme looked a bit different than the pickup featured in the leak.

In any event, this potential model will seemingly coexist with the all-new Rattler package and the 2023 Ford F-150 Raptor R, which are all but guaranteed to be added to the mix when production for the upcoming model year begins this October. The timing of this leak, and previous leaks regarding the Raptor R, may indicate that the company is gearing up to formally introduce both additions in the coming weeks.