Last year, Ford Authority took an in-depth dive into the exclusive graphics that come standard on all 2022 Ford Maverick First Edition pickups. The upper tier equipment offering exists as an optional package on Lariat, the most expensive trim of the lineup. With its planned one year timeframe, the likelihood of seeing a First Edition example out in the wild will be small, which is why it’s worth detailing what is included for buyers, as some touches may never spread beyond what Ford deemed acceptable for the package and for the early adopters who forfeited the additional cash to own one. 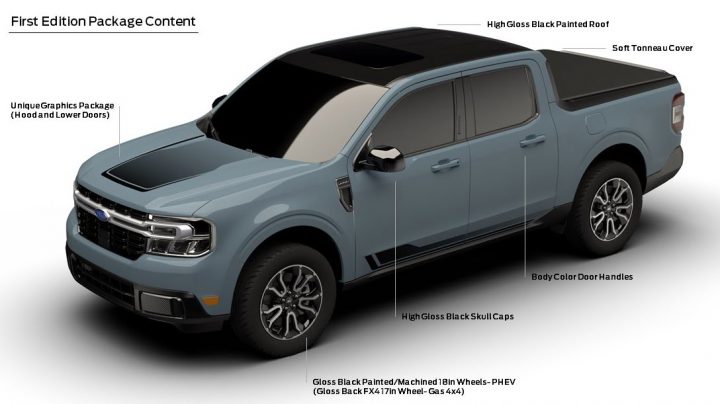 For starters, the Maverick features the words “First Edition” embossed over and over on the hood, creating a point of interest on the pickup’s livery. Pictured here is a 2022 Ford Maverick First Edition wearing the Area 51 exterior hue, one of three colors available. The first thing that one might notice about the Maverick is the blacked-out roof, which bleeds into a stripe down the center of the hood. The stripe utilizes a gradient that’s bold and black near the front of the hood, bleeding into a more transparent black the closer it stretches to the windshield. Then, the black is picked up on the roof and carried through to the bed. It should be noted that no other Maverick model can be ordered with a black-painted roof.

Additionally, the sporty racing stripes positioned on the lower part of the rear doors are noteworthy, as they feature a similar gradient style that becomes more transparent the further back it runs. The stripe leads the eye to the black plastic trim along the rocker panels and just behind the rear wheels, and gives the Maverick First Edition a custom touch right from the factory. 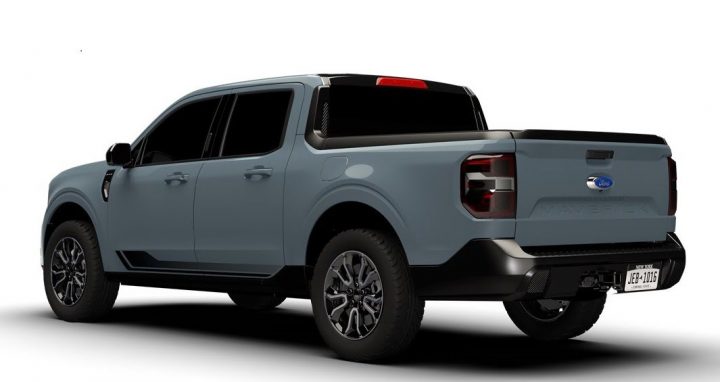 As a reminder, the First Edition package is only available to equip on the 2022 Ford Maverick Lariat, and adds an extra $1,495 to the cost of the pickup. It includes the following content:

Clearly, Ford is hitting all the marks with its Maverick pickup. The truck consistently draws in buyers who have never owned a pickup before, and is highly coveted by customers in the market for a new vehicle. Dealerships are also having a hard time keeping it on the lot, with 97 percent of new Ford Maverick retail sales coming from previously placed orders, a situation that is exacerbated by the chip shortage.

We’ll have more on the Ford Maverick soon, so be sure and subscribe to Ford Authority for more Ford Maverick news, and continuous Ford news coverage.