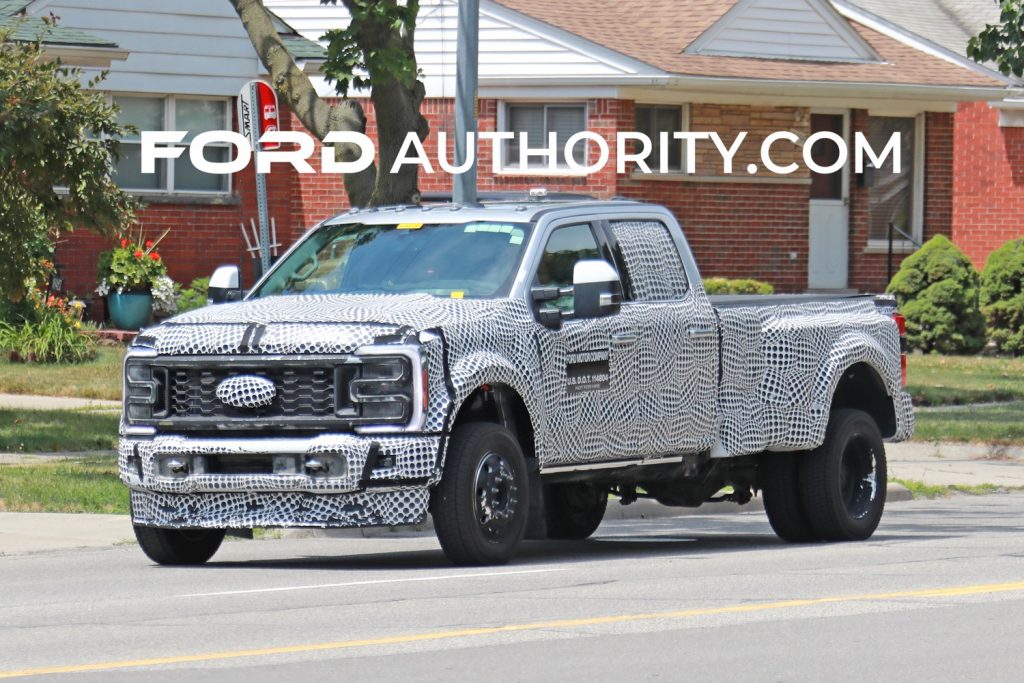 Ford Authority spies have spotted a number of 2023 Ford Super Duty prototypes out testing in recent months as the long-running model prepares to undergo a refresh, including a single cab dually, a Crew Cab dually, a SuperCab with a standard bed, a Platinum-trimmed model with black wheels, an F-450 towing a gooseneck trailer, a Crew Cab prototype wearing considerably less camo, another offering up a view of the truck’s new bed step, as well as our first look at the refreshed Super Duty’s interior, a glimpse of the bare-bones XL cabin, and an assembly line video showing off the inside in better detail. Now, those same spies have come across a 2023 Ford F-450 King Ranch dually prototype, too. 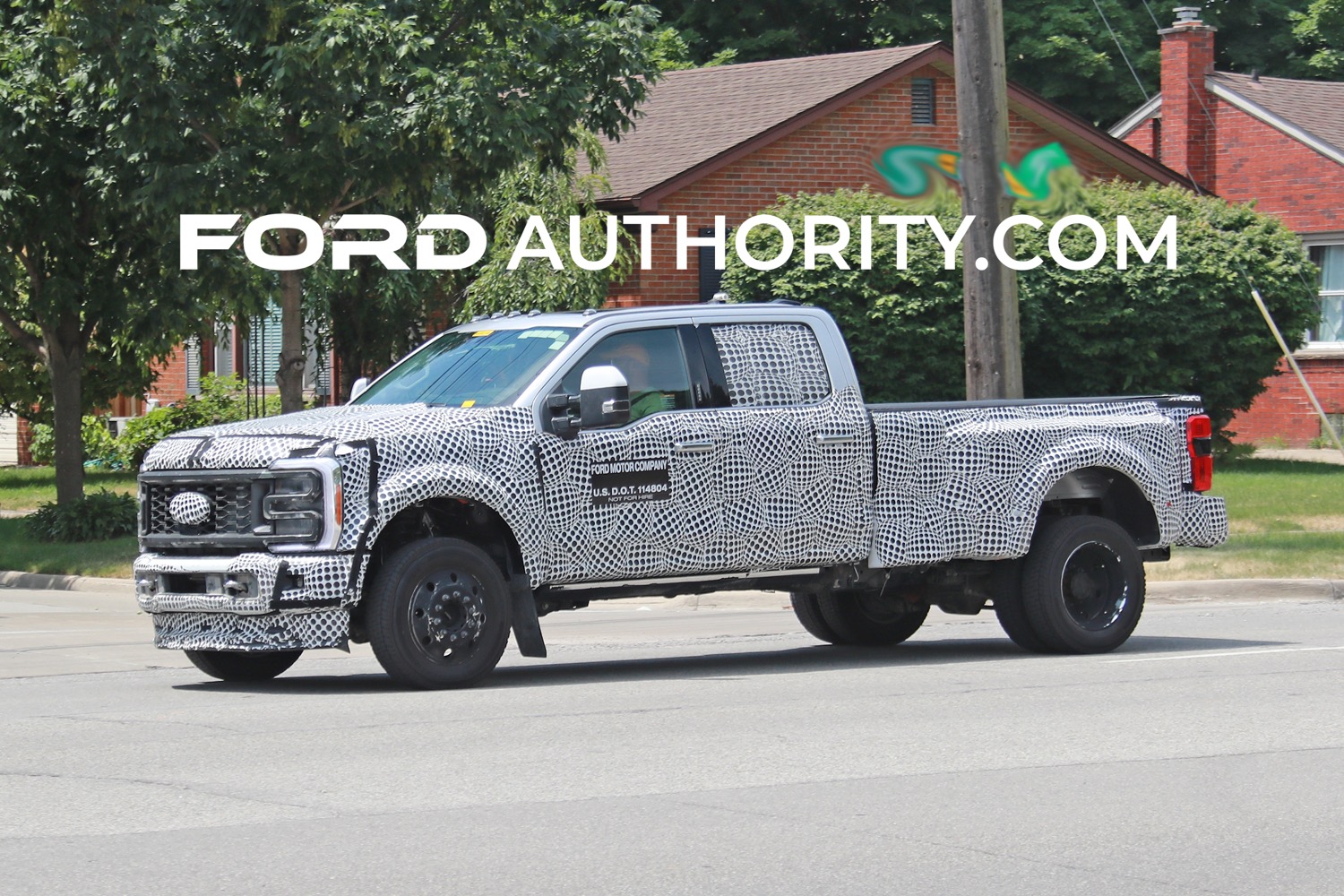 As was the case with the most recently-spied prototype, this 2023 Ford F-450 King Ranch dually is wearing less camo on its front end, in particular, giving us a good look at the pickup’s revised styling in that area, which is influenced by the all-new 2022 Ford Maverick and redesigned next-generation Ford Ranger. The familiar split twin-bar treatment is present in the center, along with a camouflaged Ford oval, which is flanked by the automaker’s signature C-clamp headlights that surround additional lighting, including an amber turn signal in the center. 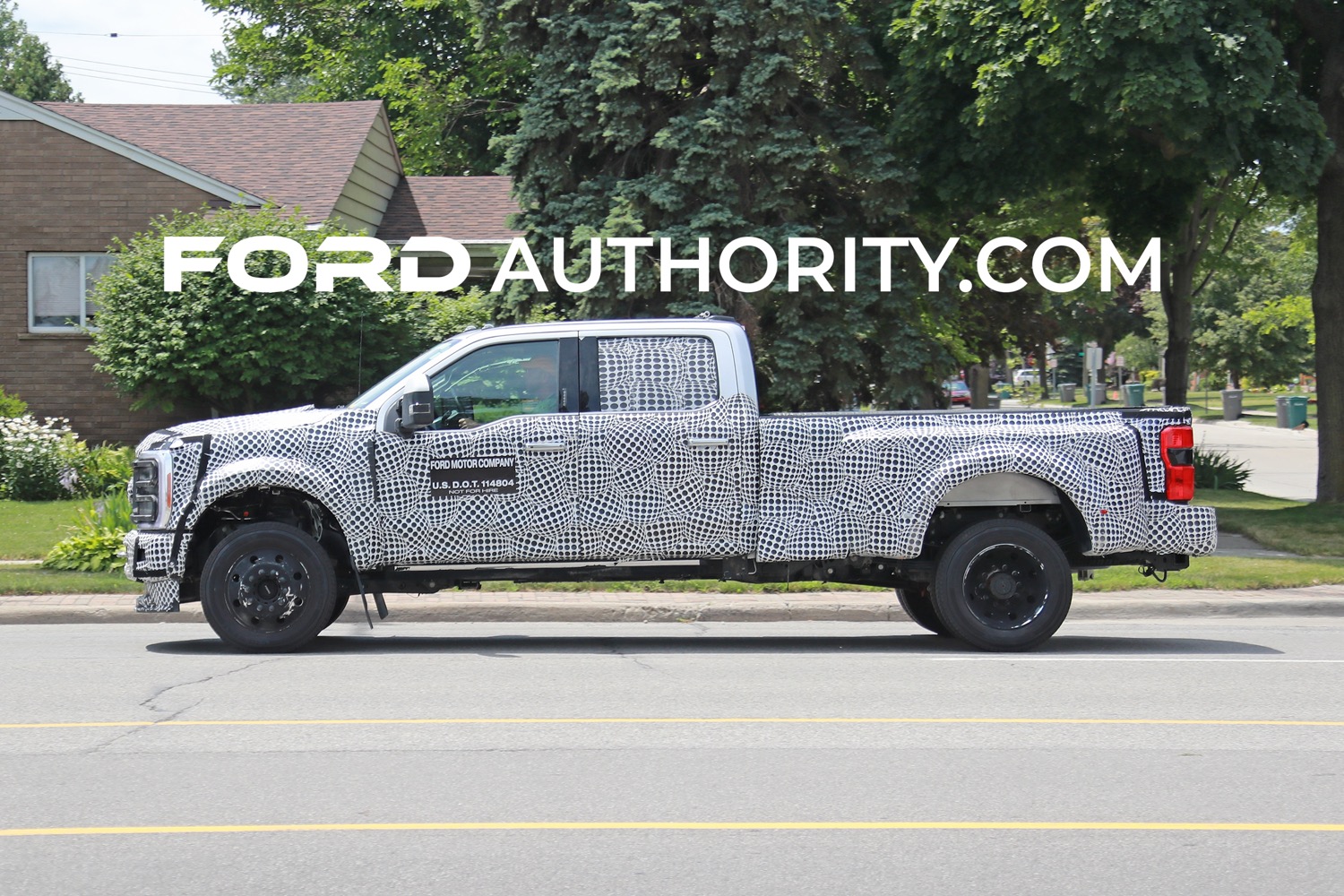 Moving down the side, we get a better look at this prototype’s wheel design, but otherwise, not much has apparently changed in the center of the 2023 Super Duty, as the shape of the cab carries over from the current-gen model. 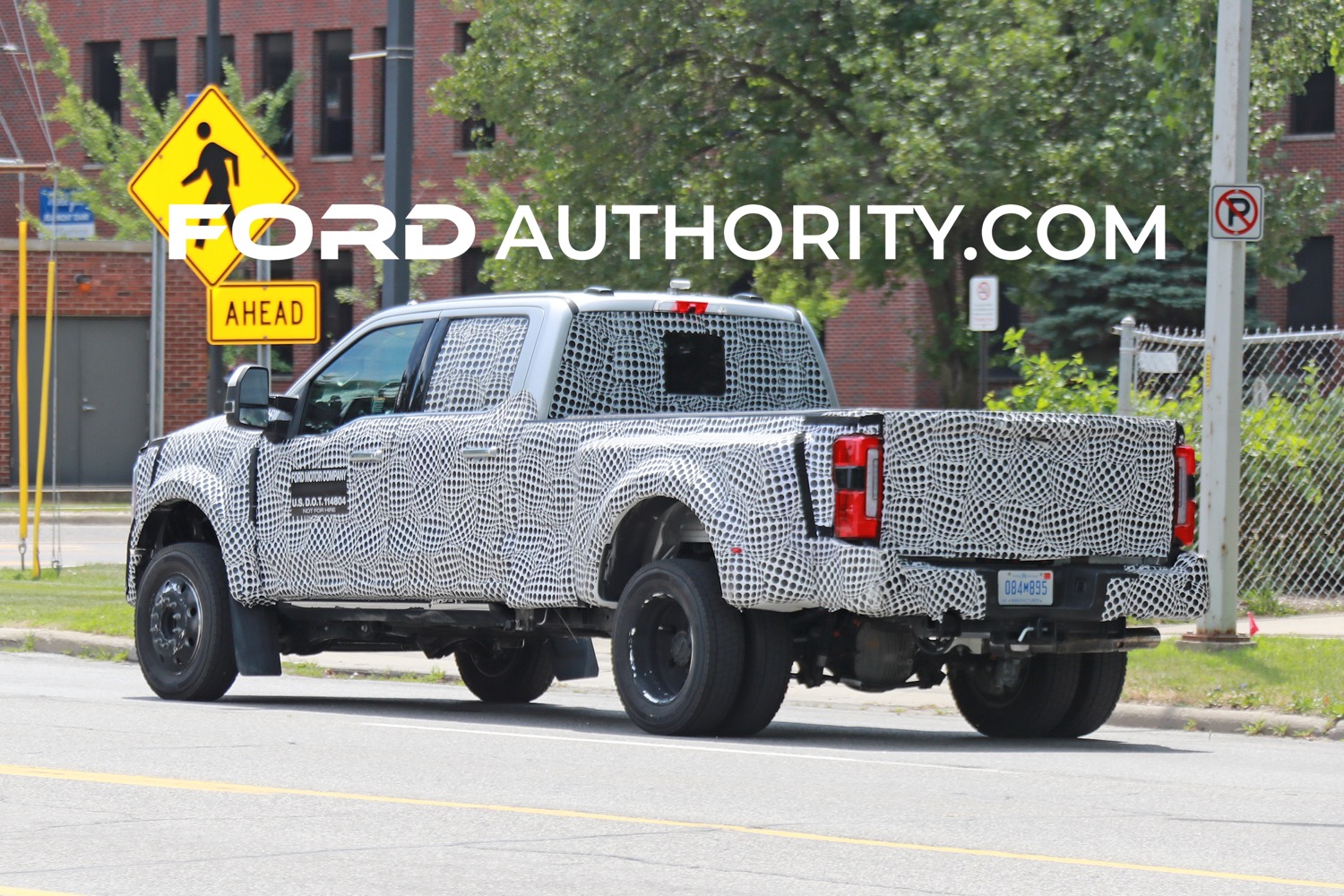 In the rear, we can see the new taillight design present on the 2023 Ford Super Duty, which is a bit different than the current model. Red sections on the top and bottom are intersected by a black element, while the white reverse lamps are vertically-oriented and placed off-center towards the tailgate. Everything else, including the tailgate, is covered in camo, concealing any additional changes. 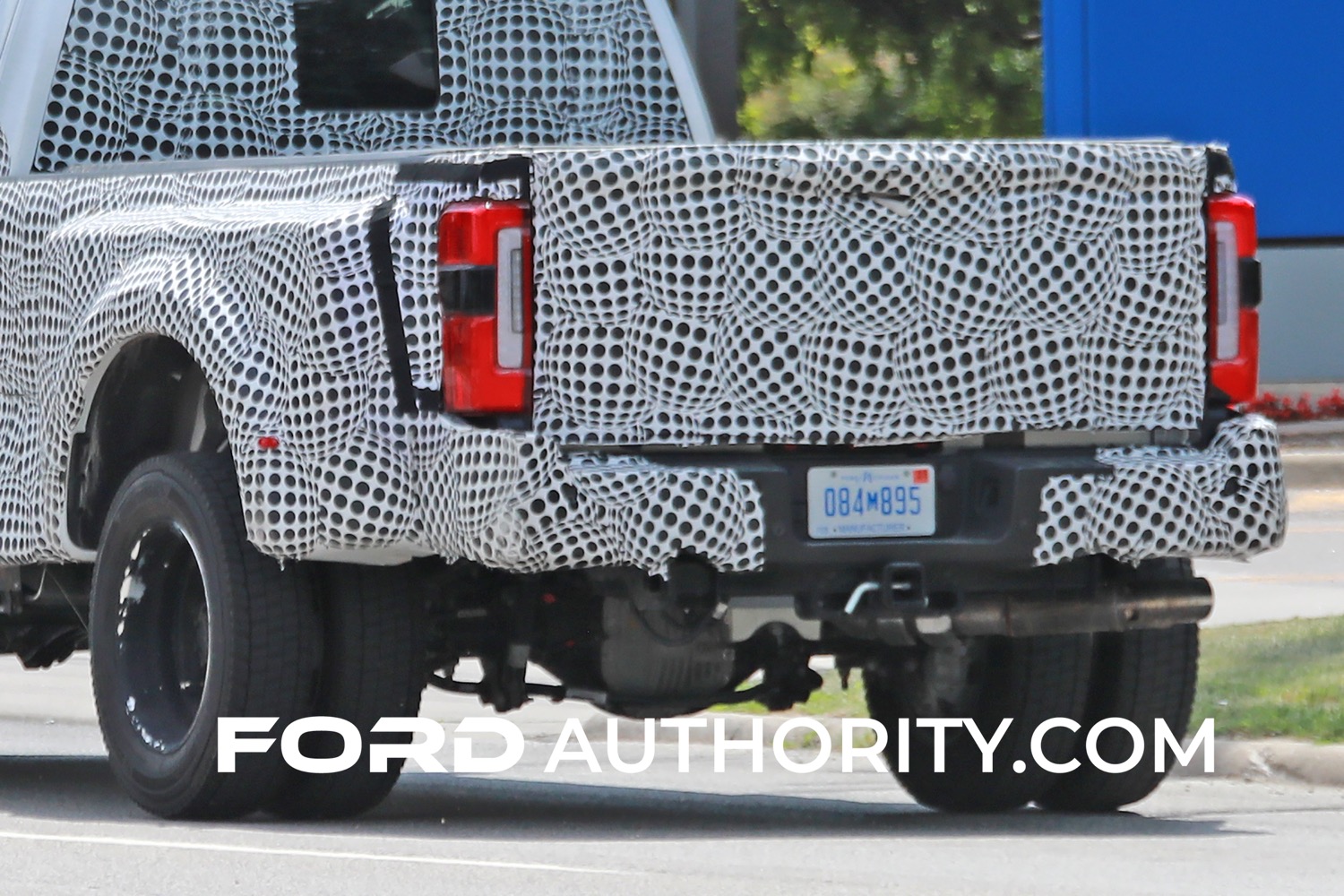 On the inside, the 2023 Super Duty will feature an overall look that’s similar to the redesigned 2021 Ford F-150. That means a new steering wheel, gauge cluster, and likely larger infotainment screens, all of which looks nearly identical to the Super Duty’s current-gen F-Series counterpart. 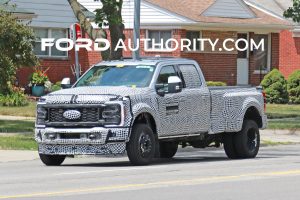 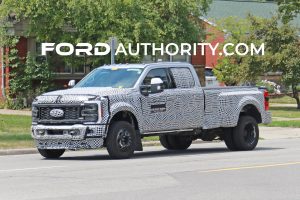 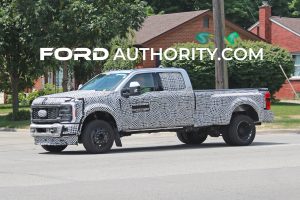 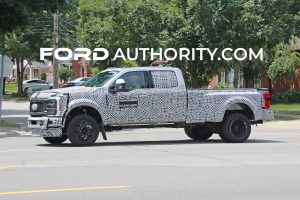 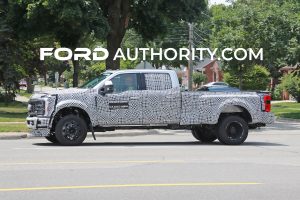 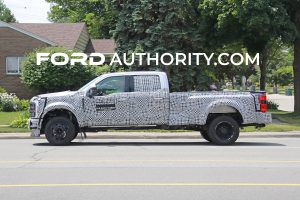 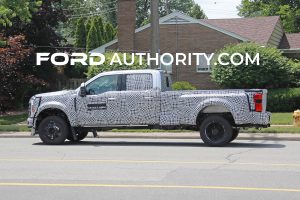 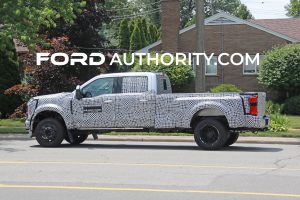 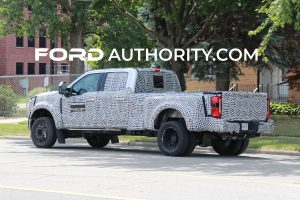 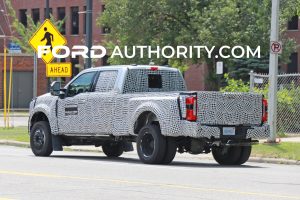 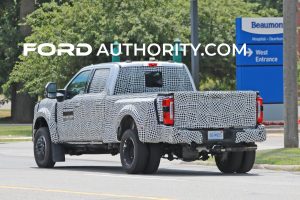 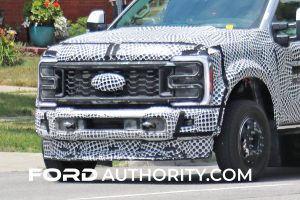