The 2023 Ford F-150 Raptor R charged onto the pickup scene with its debut earlier this month. As Ford Authority exclusively reported way back in 2019, an eight-cylinder powerhouse returned to the F-150 Raptor R line for this model year, and the muscular pickup will feature the supercharged Ford 5.2L V8 Predator under the hood. This engine produces 700 horsepower and 640 pound-feet of torque, and while that alone sets the Raptor R apart from the rest of the F-150 lineup, the high-performance truck sports quite a few exterior details that its more approachable cousins do not.

Obviously, the Raptor R gets its own “R” badging spaced throughout its exterior, such as on the unique Raptor grille and hood vent, as well as on the tailgate applique. It also boasts bold Raptor R exterior graphics to denote its status, and rides on 17-inch Forged Aluminum Bead-Lock Capable wheels, wrapped in beefy 37×12.5R17 BSW all-terrain tires. The muscular truck also features black exterior accents as opposed to chrome on the “regular” F-150 variants, and Code Orange tow hooks to lend it an aggressive, sporty look. 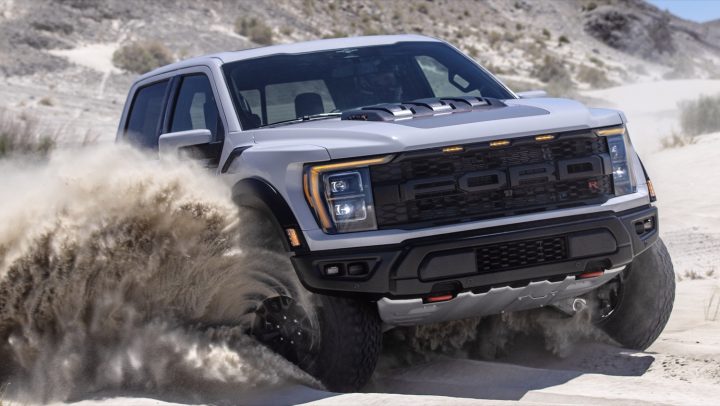 Speaking of Code Orange, the color is carried to the interior, where it’s stitched into the doors and instrument panel. It’s also found on the interior Raptor R badging, contrasting nicely with the Black Alcantara Suede and Leather RECARO seats. Sporty carbon fiber accents are spread throughout the cabin as well.

Order banks for the 2023 Ford F-150 Raptor R opened on July 18th as Ford Authority reported last month, while production of this muscular pickupis slated to begin at the Dearborn Truck plant this fall. Pricing starts at $109,145.