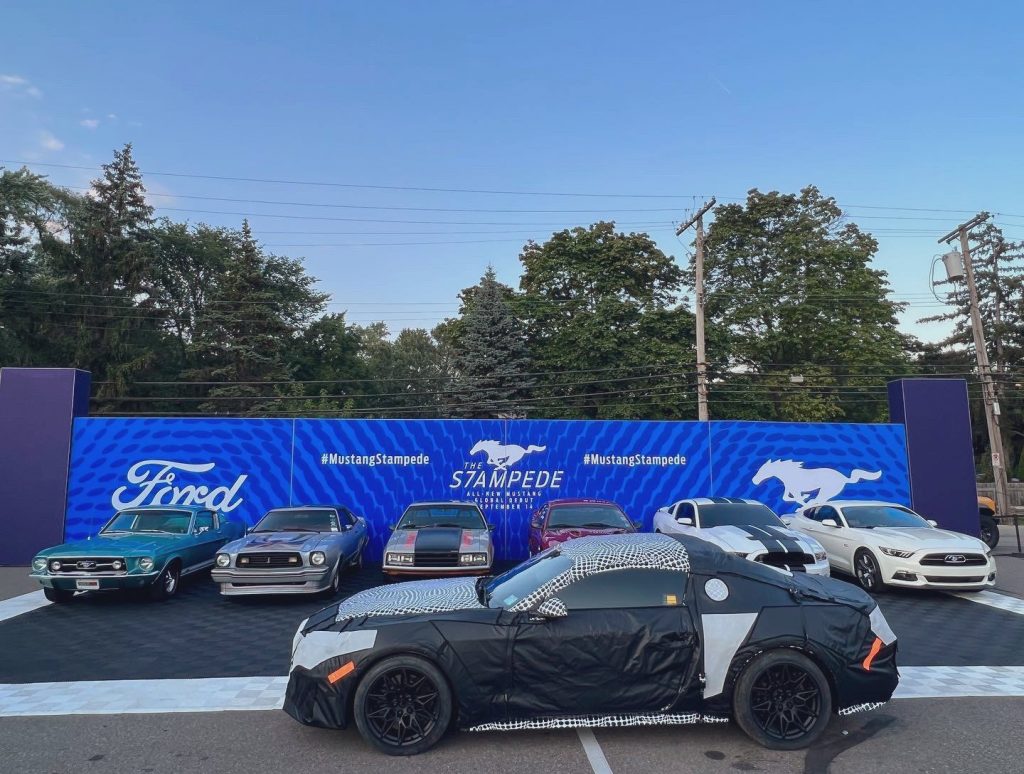 The 2024 Ford Mustang will represent the very first model year for the all-new, S650 generation of the iconic pony car. Following years of anticipation, a report surfaced recently that suggested the 2024 Ford Mustang would make its debut at this year’s Detroit Auto Show in September, a fact that was later confirmed by CEO Jim Farley himself. That reveal will happen at a special event dubbed “The Stampede,” which will take place on the iconic Woodward Avenue, which just hosted the the annual Dream Cruise this past weekend. Coincidentally, a 2024 Ford Mustang prototype was also in attendance.

Ford North America Product Communications director Mike Levine posted a couple of pictures of the 2024 Ford Mustang prototype on Twitter as it posed next to a representation of every Mustang generation dating back to the original model. This particular prototype also looks exactly like the possible high-performance model Ford Authority spies spotted back in February, as it’s wearing the exact same sort of camo and wheel design.

While the 2024 Ford Mustang is an all-new model, it won’t be radically different from the S550, and will instead take more of an evolutionary approach. This much is clear from a pair of recent leaks giving us a good look at the S650 in both base and GT form. As Ford Authority exclusively reported in April, the next-gen Mustang will also launch with carryover engines – the Ford 2.3L I-4 EcoBoost and Ford 5.0L V8 Coyote – though hybrid versions of both power plants remain a possibility for future model years. The V8-powered model will approach the 500 horsepower mark, as Ford Authority exclusively reported last month, though it will also likely be the last gas-powered model in the pony car’s illustrious history.

Join the #MustangStampede on Sept. 14 for the reveal of the all-new Mustang! Got a Mustang? Sign up to participate at https://t.co/beUJH5e0SY! pic.twitter.com/rvr44rKFZX

As recent spy photos of the interior previously revealed, the next-gen Mustang will be equipped with a new flat-bottom steering wheel, a new digital instrument cluster design, and a larger infotainment screen. The S650 won’t be available in all-wheel drive configuration, as Ford Authority exclusively reported in early April, and will continue to be built at the Flat Rock Assembly plant with an eight-year life cycle, as Ford Authority reported last August.