Revealed in December 2021 as an all-new trim level – not an optional package – the Ford F-150 Tremor effectively splits the gap between the F-150 equipped with the FX4 Off-Road Package and the more hardcore, high-performance F-150 Raptor. Among its list of added equipment, the Ford F-150 Tremor comes equipped with unique matte gray 18-inch wheels wrapped with 33-inch General Grabber all-terrain tires. Now, those same wheels are available for anyone to purchase via Ford’s official catalog, joining a bevy of recent additions including the 2021-2022 Ford Bronco Sport 17-inch wheel kit and Ford Mustang Mach-E GT Performance Edition wheel kit. 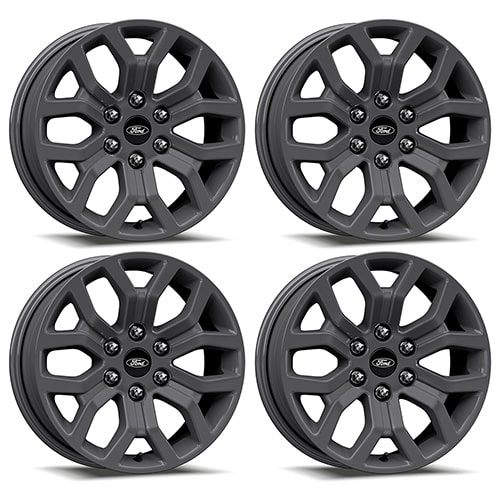 Along with the addition of this new wheel kit, the Ford F-150 Tremor is undergoing a few big changes for the 2023 model year, as Ford Authority reported back in July. For starters, the off-road-focused pickup has dropped its 400A Standard equipment group, making the more expensive 401A Mid equipment group the default, albeit more expensive choice. Additionally, the F-150 Tremor – previously available only with the twin-turbocharged Ford 3.5L V6 EcoBoost – now comes standard with the naturally-aspirated Ford 5.0L V8 Coyote engine, though the V6 remains available as an option.

We’ll have more on the F-150 Tremor soon, so be sure and subscribe to Ford Authority for the latest Ford F-Series news, Ford F-150 news, and ongoing Ford news coverage.